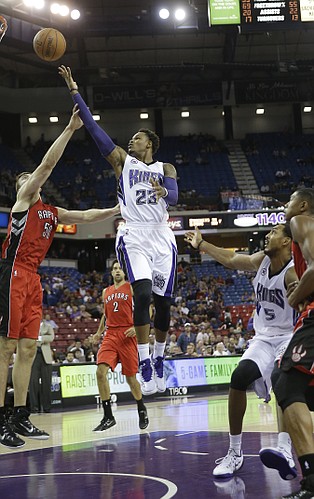 Coming off a rookie season that had both memorable moments (see: a Western Conference Rookie of the Month Award; dunking over Shaquille O’Neal at All-Star Weekend) and forgettable ones (exhibit A: shooting slumps; exhibit B: temporarily losing his starting spot), Ben McLemore enters Year 2 of his career riding some positive momentum.

• (For whatever it’s worth) The young 2-guard helped Sacramento win the Las Vegas Sumer League tournament.

• He shed the No. 16 Kings jersey he wore during his first year for the more familiar No. 23.

Welcome back. I missed you. #forever23 pic.twitter.com/dMBk2NvDi6

• The Kings picked up their team option on his contract for the 2015-16 season.

• McLemore got to travel to China with his team for bonding and shenanigans.

You think I landed this or naw? Lol. #GreatWallFoolin pic.twitter.com/Xk8vQroBf6

• He provided at least one example of his improved shot, nailing 3-of-4 from downtown and scoring a preseason-high 22 points versus Brooklyn on Oct. 15.

• For the love of all things holy, the guy had a street named after him.

Wake up to find out my hometown renamed the street I stayed on after me. Ben McLemore III Pl Just crazy blessed man. pic.twitter.com/nSHjnUrkHm

So, yeah, McLemore is happy about all of those things, and earning a spot as Sacramento’s starting shooting guard — even if that means he’ll have to battle rookie Nik Stauskas for those minutes.

Really, the worst thing he has endured lately was a brutal head-to-head collision with Wayne Ellington in a preseason game a few days ago.

None by Silver Screen & Roll

But he has been cleared to lay in Sacramento’s season opener Wednesday against Golden State.

Now the youngster known for his crazy hops and sweet-looking (if not yet totally effective) stroke can make more plays off the dribble, and he has freedom and confidence to shoot at will when he’s open.

“This summer I worked really hard on the different aspects of my game,” McLemore recently told reporters.

If McLemore has indeed made the kind of jump from freshman to sophomore year Sacramento envisions, he should be the team’s best guard — or at least the Kings' top scoring option in the backcourt, where he teams with Darren Collison, Stauskas, Ramon Sessions and Ray McCallum.

With small forward Rudy Gay and big man DeMarcus Cousins in the frontcourt, the Kings have talented pieces. But… They play in the Western Conference. Last season the Kings (28-54) finished with a better record than just the L.A. Lakers and Utah out West.

Even if the team improves on the court, it might be difficult to claw out of that cellar. The West is just loaded. And a Sactown playoffs appearance sounds like fan fiction.

Cameos in the nightly highlight reels with explosive dunks and some hot shooting nights. More importantly, McLemore figures to develop and become more well rounded and effective at the pro level.

While Sacramento should again struggle, this season could go a long way toward determining just how well the rest of McLemore’s career goes.

Sounds like it was a big 1st offseason for McLemore.

He looks and sounds a lot more comfortable and confident in front of the microphone than ever before. Hopefully that's a reflection of how he'll play on the floor this season. Focused and poised.

I was thinking the same thing. That kid just needs to build a little more confidence and the sky's the limit. If he can get a bit more cocky and a little more aggressive, he should play for a long time...