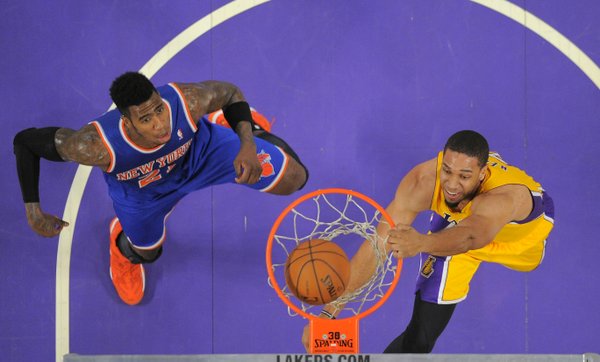 Xavier Henry hasn’t played a competitive game of basketball since April 1. But his injury issues didn’t stop the Lakers from re-signing him as a free agent this past summer.

A banged-up knee and wrist forced the young perimeter player out of L.A.’s lineup for almost half of last season. And with Opening Night quickly approaching, Henry never got to play in the preseason.

In fact, the L.A. Times reported he recently traveled to New York and Germany in search of an answer for his bothersome right knee. Henry traveled half-way around the world to receive what is known as Regenokine treatment — something Lakers star Kobe Bryant has gone through to keep his aging body as fresh as possible.

The Times’ Eric Pincus reported the procedure involves removing blood from a specific part of the body, spinning it in a centrifuge and creating a serum to inject back into the impacted area.

The good news for the 23-year-old is when he re-gains his health, he will get re-inserted into L.A.’s lineup with the expectation to produce.

Outside of Kobe Bryant, the Lakers have Wesley Johnson, Wayne Ellington, Nick Young (also injured right now) and Jordan Clarkson as their options at shooting guard and small forward. So a healthy Henry easily could turn into a sixth-man option for L.A.

Whenever Henry gets back, he admitted he will have to shake off some rust.

“I could always run out there and be like, ‘Let me play,’ and then too many things go on, something starts to hurt. I need to make sure I come back when I can fully help the team,” he recently told reporters.

If the Lakers actually think they can get back to the playoffs, they will just have to out-shoot/out-score people (they don’t exactly have any defensive stoppers). And Henry can definitely contribute in those categories as a backup, which he proved during his breakout 2013-14 season (10.0 points per game in 21.1 minutes).

When his body is at full strength, Henry can hit three-pointers or attack the rim (with no apologies to former Kansas teammate Jeff Withey).

And Kobe will need all of that kind of help that he can get.