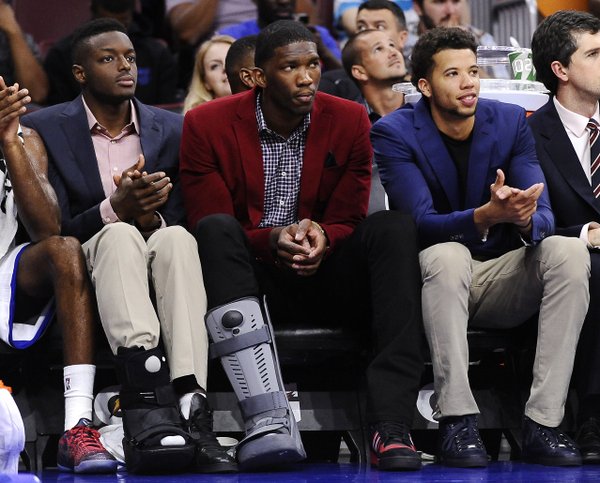 We’ll be seeing a lot more of Joel Embiid’s wardrobe game than his post game and interior defense in the months to come.

Embiid, of course, suffered an untimely fracture in his right foot in the weeks leading up to the NBA Draft — likely costing him the opportunity to go No. 1 overall and months (if not all) of his first year in Philadelphia.

When exactly will Embiid appear in a Sixers uniform and check in to a game? That’s what no one knows for sure. And even if they have a pretty good idea, the 76ers aren’t sharing that information publicly.

"Everything is progressing fantastically," Brown said. "The bone is healing. He is still in his boot. Like with Nerlens (Noel, Philly’s first-round pick in 2013), we are identifying chefs to help them eat. Identifying dietary concerns and making sure whatever is going into him is educated. He is fine. But I have to help him with diet, weight lifting, and hydration."

Philadelphia, the second-worst team in the NBA last season, ahead of only Milwaukee, figures to be the absolute worst this season. So the organization really has no reason to rush Embiid back. If the young center isn’t game-ready until March or April, the season is basically over by then anyway, so Philadelphia could shelf him to be safe and say: “Looks like you'll still be a rookie next season, rookie.” That’s the approach they took last year with Noel (ACL tear), who didn’t play a minute.

The Sixers are in full-on tank mode, stockpiling lottery picks with the hopes those guys will turn into franchise cornerstones in a few years. So while a healthy Embiid could have contributed and began developing this season, if he doesn’t play that actually might not hurt Philly’s master plan. After all, Embiid is only 20 years old.

Until the big man from Cameroon gets healthy, he no doubt will continue to dominate the Twitterverse and the video game version of the NBA.

I'm a beast in 2K15. I won a championship with Philly in my first year #NBA2K15 #unstoppable

It would be awesome to see him get cleared medically, so he could get his career started, because many around the NBA think he could be the game’s next dominant big man — or at least share that stratosphere with Anthony Davis — for years to come.

Until then, we can at least count on him to entertain us off the court.