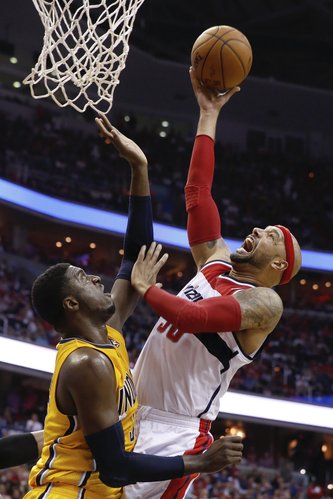 Can you name the NBA franchises Drew Gooden has played for since he left KU early back in 2002?

The correct answers are…

I believe that the Drew Gooden Map is the only one that should be taught in our schools. http://t.co/Yy9vb7VT4x pic.twitter.com/uuhSPNNOio

None by Ryan Nanni

Gooden, a career 11.7 points per game scorer, caught on with the Wizards late last season and they liked him so much they brought the ever-traveling veteran back for what they plan to turn into the franchise’s most successful run since the late 1970s.

The once-Bullets/now-Wizards have won a first-round playoff series just three times since a 1979 Finals loss to Seattle. One of those came last spring, when the ultra-talented backcourt of John Wall and Bradley Beal also nabbed Washington a pair of second-round wins against Indiana before the Pacers finished them off in the conference semifinals.

The Wizards will expect continued growth from their two stars, whom they’ve surrounded with veterans such as Gooden and another ’Hawk in the NBA, Paul Pierce.

Gooden, who signed a one-year free-agent deal this past summer, could only last this season in Washington. Still, while he is there, he’ll provide some quality depth to a frontcourt that includes Marcin Gortat, Nene and DeJuan Blair. At 33, he might be getting up there in NBA years, but he can come in and rebound and/or score for you in a pinch.

He probably won’t play major minutes off the bench unless Washington runs into injury or foul trouble. However, he’ll be a part of one of the up-and-coming teams in the Eastern Conference and every once in a while get to prove he’s still got some double-digit production hidden somewhere in his beard.