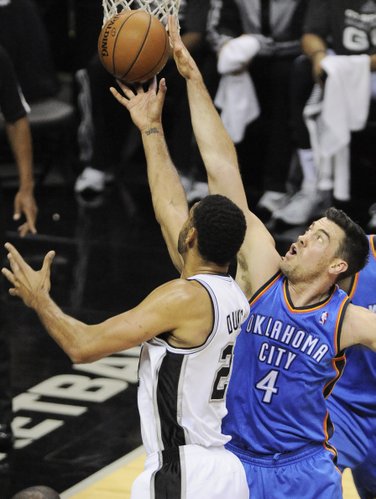 A quintessential role player with one of the NBA’s first-class organizations, Nick Collison has done dirty work since he showed up in the league a decade ago.

Now the question is: how much longer will we see Collison boxing out, rebounding and diving for loose balls in an Oklahoma City uniform?

He has never played fewer minutes per game than he did last season (16.7). Never averaged fewer points in a season (4.2). Never brought in fewer rebounds a game (3.6).

Collison, who turns 34 this week, actually has reached the point in his career that he can — and has been —described as “aging” in the headline of a story.

NewsOK.com’s Anthony Slater recently asked Collison, in the final year of his contract with the Thunder, about what lies ahead.

“Everyone, always, you think about the future,” Collison said. “But one thing I’ve learned over the years, you can’t really ask yourself an unanswerable question. Someone told me that once and I think that’s a good way to look at it.”

In terms of its frontcourt rotation, OKC is trending young. The past two years, the organization has drafted Steven Adams and Mitch McGary — both big men in the mold of Collison: tough, crafty, don’t need touches to be effective while blending in with a star-laden lineup (see: Kevin Durant, Russell Westbrook and Serge Ibaka). Perry Jones continues to develop as a viable option at power forward, too.

Adams essentially is Nick Collison Version 2.0. Whomever edited Grantland’s Bill and Jalen’s 2014-15 NBA Preview can’t even tell the difference between the two of them.

So it stands to reason Collison’s minutes and production could drop a little more this coming season as Oklahoma City tries to get out of the West and back to the NBA Finals after falling short two years in a row.

However his role forms, it’s obvious coach Scott Brooks trusts Collison in every situation. Here is what the head coach told NewsOK.com:

“You could put him for five minutes or for 35 minutes,” Brooks said. “He’s going to give you everything he has.”

Old? Maybe. Reliable. Of course. In Collison’s preseason debut Tuesday, he hit all three of his shots and scored eight points in 11 minutes versus Utah.

He even drilled a pair of 3-pointers. (He has hit five in his career.)

His stats might take a decline. But we could still see him on the floor in crunch time as OKC chases the No. 1 seed in the West and an NBA championship.

Collison won’t be the guy on SportsCenter’s Top 10. He’ll be the guy in perfect position under the boards, making sure his man can’t get the rebound.

And he might just have a new go-to shot. From downtown.