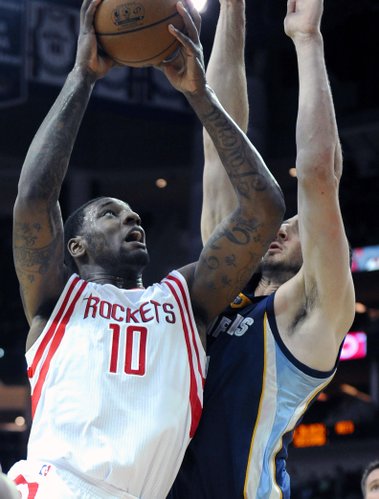 Houston Rockets' Tarik Black (10) goes to the basket against Memphis Grizzlies' Kosta Koufos in the first half of an NBA exhibition basketball game Thursday, Oct. 9, 2014, in Houston. (AP Photo/Pat Sullivan)

When no NBA team used a draft pick this summer on Tarik Black, it seemed his road to the league could end up being a circuitous one, perhaps beginning in a D-League city or overseas.

However, the robust post player who spent just one season at KU after transferring from Memphis earned himself an NBA contract with Houston by doing Tarik Black things in summer league games — see: rebounding, defending, having a 6-foot-11, 250-pound frame and knowing how to use it to his advantage.

The Rockets have so much money tied up in the contracts of Dwight Howard and James Harden, they had to fill their roster with inexpensive options who they thought could also make an impact on the team.

They appear to have done just that with Black. He isn’t going to be a go-to big off Houston’s bench, but he could work his way to consistent meaningful minutes and has proven himself to some extent in the preseason. The people running the organization know they can trust Black to practice hard and not mess anything up when they need to use him in a game.

“He is a guy who has rebounded well, spaces well,” McHale said. “Sets good screens, been active. I have been impressed. If you play hard all the time, you have a leg up on a lot of guys.”

In Houston’s six preseason games, Black has played between 10 and 26 minutes. When the Rockets kept him on the floor 26 minutes (with the big men ahead of him resting) against Memphis, he put up 10 points and 15 rebounds.

Once considered a long shot to make the roster after signing for the league minimum, he has played enough in the preseason to indicate he could stick around and become a backup big — even if it’s at the end of the bench.

If Houston decides it likes Black as part of its plans going forward, the organization could still opt to send him to play with its D-League affiliate, Rio Grande Valley, in order to further his development.

With the Rockets’ personnel they are likely to play four-out/one-in, with just one true post player, meaning minutes behind Howard — and backups Joey Dorsey and Donatas Motiejunas — could be hard to come by.

Still, you can tell by listening to Black’s comments (in the above YouTube clip) that he is learning every minute that he is involved in this process, while playing his part on one of the best teams in the Western Conference.

And he has found some time to enjoy himself, too, by doing things such as out-dunking Howard:

Good thing we stopped there though...he start doing some ridiculous stuff then I can't keep up. He got dumb rise

Whether he is in Houston or the D-League, he’ll be competing like a maniac and soaking up all the knowledge he can to turn himself into a trusted NBA player.

That's what he was listed at, so I guess it's official. Though we know better.

Maybe his kicks had quadruple-padded soles.

he does look taller now, presumably because he's lost some weight.

Tarik has had a great pre-season. Good for him, It will be interesting to see if they put him on the bench, or if play him in DLeague most if not all year.

With Houston's track record I'd guess that he'll be the DLeague pretty much all year. If he's successful then he may end up as a trade piece. Houston's pretty unpredictable, but McHale likes to keep as many shooters on the floor as possible if he can. So I'd guess that he'd have better opportunity to play as a low post PF with some other team.

Tarik was Howard's backup center last night and played more and outplayed Julius Randle ( He got hurt at the end). I don;t want to Jinx anything, but I am really happy for him, and hope he gets that kind of PT every game. RCJH

I saw him in the game, too. He looked bigger than ever. Strong, physical, active. He can battle for position as well most starting big men in the league.

He lacks the prototypical size to play the Center position, but the NBA has gone away from dominant 7 footers, and he could carve out a good career as a Center in the league if he continues to progress.