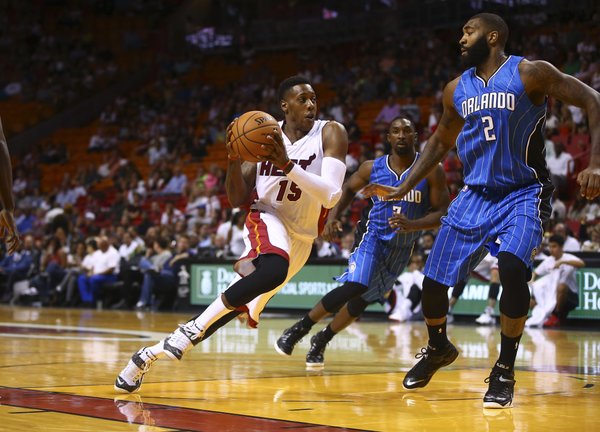 No longer a teammate of LeBron James, who took his talents right on back to Cleveland this past summer, Chalmers and what’s left of Miami’s former championship-contending roster could be good enough to secure a No. 4 or 5 seed in the Eastern Conference. But anything more than a trip to the second round of the playoffs? Don’t bet on it.

Dwyane Wade and Chris Bosh are now the clear top options for the Heat, and the franchise replaced (a word which might not ever have been more misused than it is in this sentence) James with Luol Deng.

Chalmers started at point guard for Miami during its recent glory years, but it now appears he will be playing more of a combo guard role and possibly coming off the bench.

Also, let’s be honest, he always has been more of a combo guard than a point guard anyway. Apparently Miami and coach Erik Spoelstra are just making that label official.

In a story from the Sun-Sentinel’s Shandel Richardson, Spoelstra said there was a span in Miami’s Friday preseason game against Golden State during which Chalmers played point guard one possession and off the ball the next.

"We forced him to become a point guard," Spoelstra said. "We've developed that aspect of his game for six years … That's six years in the makings. If you're expecting a young player to do that immediately in this league, there's no chance."

According to Richardson’s story, Wade told Chalmers he plays more aggressive as a two-guard. So the at times maligned Miami guard has that going for him.

Plus, taking on this newly defined role shouldn’t be bad for the former KU standout. With Norris Cole and Shabazz Napier — Miami’s first-round pick this year — also contending for point guard minutes, this really gives Chalmers more flexibility, and probably more playing time than if they only used him at the point. Now, in theory, he would be the first guard off the bench if he doesn’t end up starting, and could play alongside Wade, Cole or Napier or whomever else Miami decides to use in its backcourt.

Still, the notion that Cole has somehow surpassed Chalmers in the NBA starting guard department even befuddled Miami beat reporter Ira Winderman, who wrote about his puzzlement with the situation in a reader mailbag. He didn’t have an answer when someone wondered how Cole had moved past Chalmers in the rotation.

Chalmers played a personal preseason high of 33 minutes Tuesday, while coming off the bench against Houston. He went 2-for-5 from 3-point range, scored 13 points, swiped four steals and passed out three assists.

But it seems he never can do enough to impress his Miami critics.

His team won’t be nearly as good as it was the past four years, but the seventh-year guard will probably have more put on his plate. And with more responsibility, Chalmers could put up career numbers while again playing for a playoff franchise.

Plus, with James out of town, Miami won’t garner nearly as much media attention. So maybe people will stop trolling/trashing Chalmers on Twitter.