The first handful of games tipped off this past week, marking the start of the 82-game grind. 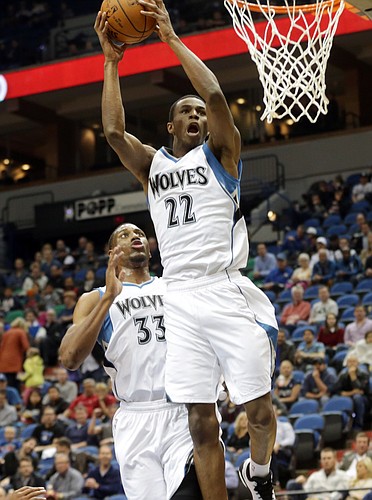 The No. 1 overall pick in the 2014 NBA Draft, Andrew Wiggins figures to have a long, successful career ahead of him.

However, the one-and-done KU product is learning quickly nothing comes easily in the league.

In Wiggins’ first official game with Minnesota, he only played 19 minutes and didn’t make a field goal until the second half. He at least looked good doing so, with a smooth 3-pointer for the first bucket of his career at Memphis on Wednesday.

Wiggins had six points and three rebounds in his first game with the Timberwolves — a loss. The next night, he made four of nine shots for eight points and added four rebounds.

Once again, the building blocks of a future NBA all-star were on display, especially on an and-one take to the rim that showed off his hang time.

The Timberwolves won their Thursday game against Detroit, but game No. 3 of 82 came against one of the Eastern Conference’s top teams, Chicago.

The individual highs and lows of that one encapsulate what the next six months will look like for the 6-foot-8 rookie guard.

At one point, Wiggins pinned Joakim Noah’s take to the glass with two hands as a help defender, then made sure Nikola Pekovic got out of his way so he could save the ball from going out of bounds.

That defensive aggression took him too far late in the game, though. As Jerry Zgoda chronicled for the Star Tirbune, Wiggins essentially gave away a Minnesota victory Saturday night against the Bulls, in the game’s final second.

Chicago’s Jimmy Butler baited Wiggins into a foul with Minnesota leading by one with less than a second remaining. Butler went to the foul line and hit both free throws to win the game.

“For sure, I could have changed the outcome of the game,” Wiggins told the Star Tribune. “I don’t know what I was thinking. It was a good play by a veteran player and a learning experience for me.”

Zgoda added Wiggins said that lesson was: “stay down.”

While the rookie seems to be enjoying the beginning of his career, with features on him popping up not only on sports websites but also in GQ, he obviously has a lot to learn before he reaches the level most deem him capable of achieving.

Who's on deck to be the most stylish player in the @NBA? @22wiggins: http://t.co/1Kz8xHpjni pic.twitter.com/qamZIW3ZZT

None by GQ Magazine

Ups and downs, for sure. But plenty of highlight plays popping up via YouTube, Vine, Instagram, GIFs and any other place where people get posterized these days, too.

He’ll have a shot at challenging for Rookie of the Year. But Wiggins will have to outperform Milwaukee’s Jabari Parker, Philadelphia’s Nerlens Noel and Orlando’s Elfrid Payton to do so.

The Timberwolves play in the Western Conference, which has at least 11 legitimate playoff contenders. Minnesota isn’t one of them.

Wiggins will start all season, learn on the fly and catch ridiculous alley-oops from point guard Ricky Rubio. Some nights, he’ll look like a star. Other games, he’ll look lost.

Rookies don’t come into the NBA and automatically dominate unless their names are LeBron or Shaq. Wiggins isn’t a once-in-a-generation superstar, but he just might be the best former Kansas player in the league for years to come. (Depending, of course, on his KU teammate Joel Embiid’s longterm health).

Here is one guarantee on Wiggins’ career: It will be fun to watch.