Hopefully that’s not your mindset, but people should be warned: The at times seemingly never-ending NBA regular season is in full effect.

Thankfully for us, all we have to do is sit back, watch and enjoy. To make sure you’re fully prepared for the long haul, we have rolled out a season outlook for each former Kansas University player who currently calls The Association home. 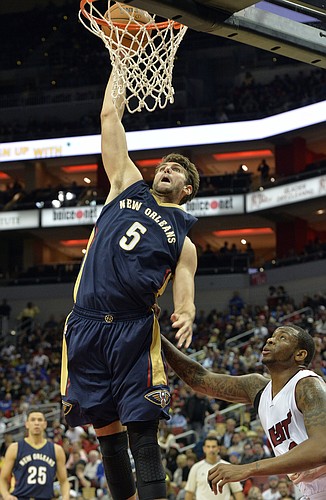 If you haven’t heard much about Jeff Withey recently, there is a reason for that.

The second-year big man out of KU plays for a New Orleans team with bigger/stronger/more talented options in the paint.

The Pelicans aren’t your typical NBA team. They start two guys at power forward and center who give them a twin-towers look on defense. NBA superstar-in-the-making Anthony Davis is their 6-foot-10, shot-swatting 4, and Omer Asik gives them a 7-foot defensive presence at the 5.

If New Orleans wants a little more offensive pop, it can bring Ryan Anderson in as a stretch-4 and slide Davis over to center. And the Pelicans’ backup 5 is 7-foot-2 Alexis Ajinca.

All of those guys push Withey down to the bottom of the depth chart.

New Orleans coach Monty Williams has only opted to play Withey in three of the team’s eight games. Withey played just two minutes apiece in Pelicans wins over Orlando and the Lakers, and played five minutes in an absolute rout of Minnesota.

Basically, if Withey is on the floor, the game is already over.

None by Scott Kushner

As Nakia Hogan wrote for NOLA.com, Withey finished his rookie season strong and he hoped to play a more prominent role for the up-and-coming franchise this season.

However, Withey struggled to establish himself in the preseason, making it easy for New Orleans to keep him at the end of the bench.

Williams told NOLA.com that he thinks the 7-footer will work through the issues that slowed his growth.

"Obviously, Jeff is a guy who hasn't played as well as he would have liked to," Williams said. "But he constantly works on his game, so it'll come."

Unless some drastic change comes from Withey’s play in practices or injuries plague New Orleans’ frontcourt, it doesn’t look like he will be part of the team’s plans.

The 82-game NBA season is such a grind, though, Withey is sure to get some minutes one way or another along the way. Will he make the most of those opportunities, and prove he belongs in the Pelicans’ rotation? That part is up to him.

If he does, his second season in the league could be a fun one, with New Orleans trying to surge out of the lottery, and into the playoffs.

Since we'll probably lose a couple more players to the NBA, what's the chance Withey might take some classes so he'd be eligible to play next summer for the USA Jayhawks? :)