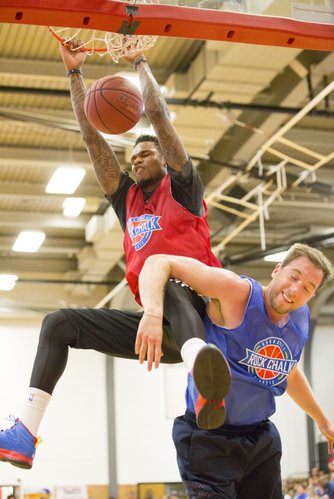 Ben McLemore brings down the house as he slams home a monstrous dunk over Brady Morningstar during the annual Rock Chalk Roundball Classic, played Thursday evening at Lawrence High. by John Young

Considering his team, the Sacramento Kings, had just selected a shooting guard — the same position at which he started 55 games as a rookie — with the eighth overall pick in the NBA Draft, Kansas University product Ben McLemore played it cool on draft night.

A year removed from his own introduction to the league, when the Kings took him seventh overall, McLemore sent out a welcome tweet to his new teammate (and potential competitor for playing time), Michigan guard Nik Stauskas:

Welcome to Sac @NStauskas11 The Kings fans are great. You'll like it here. Congrats. #youngkings

Outwardly congenial, McLemore revealed to the Sacramento Bee's Jason Jones that the choice initially surprised him.

“I wasn’t expecting that,” McLemore told Jones. “At the same time, they felt he was the best available draft pick, so I’m fine with it. At the end of the day, it’s a business, and I’m just going to do what I have to do to get better as a player.”

While his rookie season included flashes of production and promise, such as when the league named McLemore the Western Conference rookie of the month in November, the first-year guard struggled in stretches, too. He finished the season with an 8.8 points per game scoring average and less than impressive shooting percentages: 37.6 from the floor and 32 from three-point range (he missed 202 of his 297 attempts).

As McLemore and other members of the Kings' summer league team gathered in Las Vegas for mini-camp on Monday, head coach Michael Malone indicated to the Bee that McLemore's performance didn't inspire the organization to try and draft a replacement in Stauskas, a 6-foot-6 shooting specialist who drained 44.2 percent of his three-pointers this past season at Michigan.

“There’s only a few LeBron James, Kevin Durants, Kobe Bryants out there,” Malone said. “Most rookies come out and struggle. (McLemore) went through the struggling times. The most important thing for me was February was his toughest month, but in March and April he really got himself up off the mat. He showed resilience and finished the season on a high note (career high 31 points in finale).”

Jones reported Sacramento's Monday practice included some experimentation with playing McLemore and Stauskas side by side.

“It was good,” the rookie told the Bee. “For the most part, we were on the floor at the same time. He’s a great player, and hopefully we can feed off each other well.”

After playing with Stauskas for the first time (they played against each other in the 2013 Sweet 16, when Michigan beat Kansas, 87-85, in overtime), McLemore gave a brief scouting report in a video interview posted on the Kings' website.

"We've kind of got a similar game," McLemore said. "We both can shoot the ball, we can put it down on the floor, you know, (do) different things. I think we'll be a good backcourt."

Report: Clippers may try to reunite Pierce with Rivers pic.twitter.com/m2rCSG5eX0

Paul Pierce is in Las Vegas, too. But not for the NBA's summer league. Apparently unfazed by his status as an uncommitted free agent, "The Truth" is working on one of his favorite hobbies at the World Series of Poker.

As for what uniform he'll wear in his 17th NBA season? Pierce could re-sign with Brooklyn. But ESPNNewYork.com's Mike Mazzeo reported the 36-year-old small forward wants $9 to $10 million a year, while the Nets would like to pay him between $6 and $8 million.

According to Mazzeo, Nets general manager Billy King said the Los Angeles Clippers inquired about a sign-and-trade deal for Pierce, who teamed with Clippers coach Doc Rivers to win an NBA title in Boston. However, King didn't like what L.A. offered.

Like Pierce, the six other KU products looking to sign as free agents might have to wait for stars LeBron James, Carmelo Anthony and Chris Bosh to make their decisions, because so many teams are holding back on contract offers until those pieces of the personnel puzzle fall into place.

Aldrich told the Journal-World on Monday he would like to re-up with New York. Gooden told the Washington Post's Dan Steinberg he is interested in remaining in D.C., with the Wizards. Hinrich has long stated his desire to keep playing for Chicago.