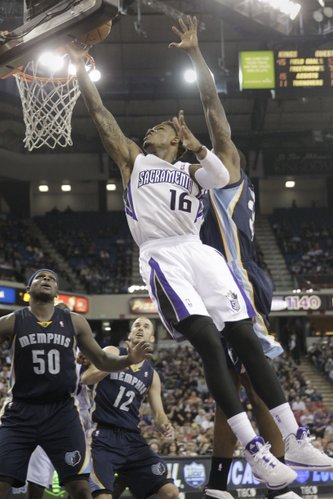 By all accounts, Sacramento rookie guard Ben McLemore is doing all he can to become a better NBA player.

Earlier this week, the Sacramento Bee's Jason Jones had a story on that very subject. Even on days off — when players have the freedom to do whatever they please — McLemore hits the weights and works on his game.

McLemore spoke with Jones about some of the aspects of his game that he tries to address:

“I was telling coach (Chris) Jent and coach Dee (Brown) the things we’ve been working on I’ve been perfecting out there on the court,” McLemore said. “I’m more comfortable dribbling the ball, coming off screens and handling it and creating shots for myself. I’m definitely comfortable and I want to continue to grow.”


He put some of those skills to use earlier this week, on his way to 18 points against Denver.

Despite his development, McLemore wasn't one of the nine NBA rookies chosen to participate in the Rising Stars Challenge, a showcase game for first- and second-year players at the NBA's upcoming All-Star Weekend, in New Orleans.

McLemore averages 7.9 points and 2.8 rebounds through 45 games this season for the Kings. He's shooting 36.8 percent from the floor. Below is his shot chart. (Red is below the NBA average for that area of the floor, yellow is about average and green is above average.) 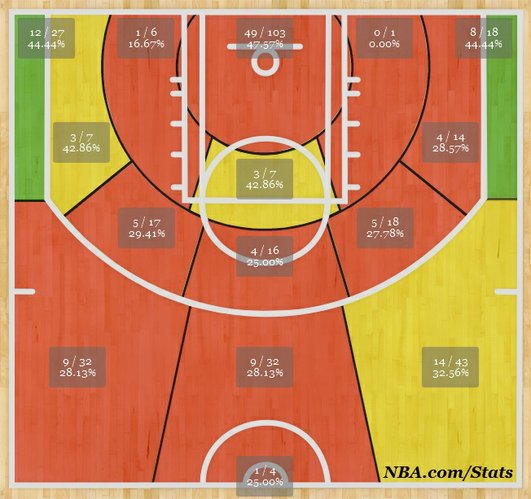 Here's the weird thing about McLemore's omission: he is fifth among NBA rookies in scoring. The only first-year players averaging more than the Sacramento shooting guard are Philadelphia's Michael Carter-Williams, Orlando's Victor Oladipo, Utah's Trey Burke and New York's Tim Hardaway Jr. All five of them made the cut. (Go to BleacherReport.com for a full list of Rising Stars Challenge participants.)

Surely, McLemore must be disappointed about the snub. But the rook seems wise beyond his years in his response to the selections.

Thanks to everyone who voted for me. Congrats to all of my fellow rookies who made the #BBVACompassRisingStars game.

It's just not in the NBA. The D-League's Maine Red Claws announced Thursday they signed the guard out of Kansas and he's expected to join the team on Sunday.

The Red Claws are an affiliate of the Boston Celtics.

Whether Taylor proves himself worthy of a spot in the NBA in the next couple of months — with Boston or another team — remains to be seen. We'll find out in the weeks to come how he responds to a new situation — and one he likely didn't anticipate being in at this point of the season. 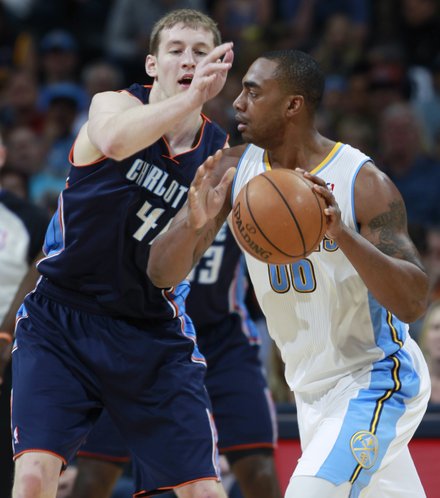 Charlotte Bobcats center Cody Zeller, left, stops Denver Nuggets forward Darrell Arthur as he works the ball inside for a shot in the first quarter of an NBA basketball game in Denver on Wednesday, Jan. 29, 2014. (AP Photo/David Zalubowski)

The man known around KU basketball as "Shady" got back on the floor this week for Denver. Darrell Arthur had missed seven games with a strained hip, and played for the first time since Jan. 11 on Wednesday against Charlotte.

Arthur played 17 minutes in his typical role, off the bench, and surpassed his season average (5.7 a game) with seven points for Denver.

The 6-foot-9 forward even buried a three-pointer in the final minute to get the Nuggets within a point, but the Bobcats went on to win.

"The only first-year players averaging more than the Sacramento shooting guard are Philadelphia's Michael Carter-Williams, Orlando's Victor Oladipo, Utah's Trey Burke and New York's Tim Hardaway Jr. All five of them made the cut."

Does Michael Carter-Williams count as two because of the hyphenated last name?

Tyshawn belongs on an NBA roster and I expect him to prove it in Maine. Hopefully he doesn't let it get in his head about being cut by NO.

And McLemore deserved a shot in the Rookies/Sophomores game. But he'll take it in stride and use it as fuel for the 2nd half of the season. I have a feeling that Ben's gonna be solid from here on out.

Out of curiosity I looked up the latest on X. Henry. He went in for an MRI hoping to be cleared to play this week, but the MRI showed no improvement, so they indicated that he was out for the week this week and still just calling it a bone bruise. He was injured on December 29.

BMac's biggest problem has been the Kings signing of Rudy Gay. I get that he is a good player, but if you're going to draft these kids in the lottery, then u should commit to them.

Tyshawn will need to perform bigtime and bump out that mizzou clown Pressey who is currently occupying a backup role for Rajon Rondo. Hopefully that old rivalry will be further motivation. Boston is rebuilding and he needs to find a good spot in the foundation. See this as your opportunity Ty.

The Celtics don't have the contract rights to Taylor. Maine themselves own his rights and if any NBA team out there wants to sign Taylor to a 10 day contract or a contract for the remainder of the season, they are free to do so.