A ringing endorsement for Ben McLemore 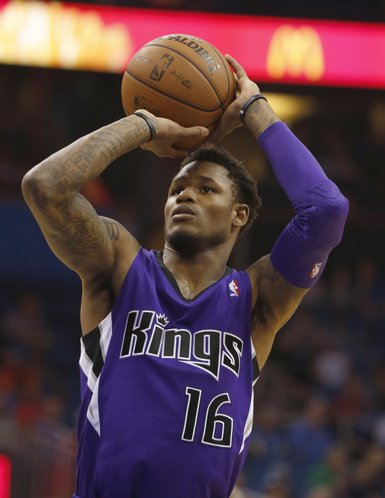 Through the first 31 games of his NBA career, Sacramento’s Ben McLemore has made a name for himself with highlight-reel dunks.

But coming out of Kansas, most of the attention was on McLemore’s smooth jump shot. McLemore wowed with his textbook release and clutch shots, and during his one-and-done year, he shot 42 percent (73 of 174) from beyond the arc.

As the NBA draft approached, scouts and journalists never missed an opportunity to compare McLemore to the league’s all-time leader in three-pointers, Ray Allen. McLemore embraced the narrative, too. From the Orlando Sentinel, days before the draft: 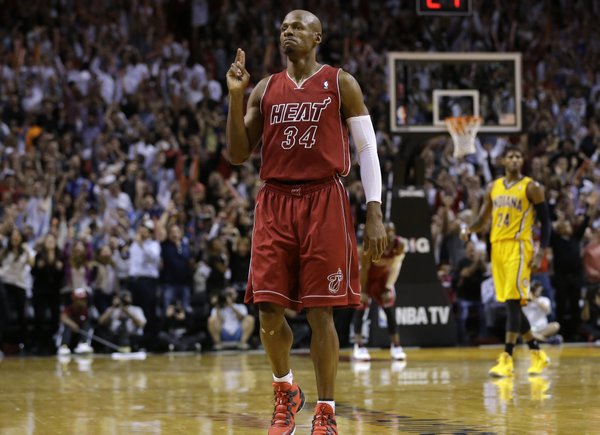 Miami Heat's Ray Allen reacts after making a 3--pointer to put the Heat ahead in the second half of an NBA basketball game against the Indiana Pacers, Wednesday, Dec. 18, 2013, in Miami. The Heat won 97-94. (AP Photo/Lynne Sladky)

So far, McLemore hasn’t come close to matching the pre-draft expectations and is shooting just 34 percent (41 of 120) from three. But the lofty comparisons to Allen persist, and Kings blog CowbellKingdom.com recently went to the future Hall of Famer for the definitive answer on McLemore:

He’s a jump shooter, first and foremost. He looks like, I haven’t seen him a lot, but every shot he takes, it seems like he duplicates the first one to the next one to the one after that. He stays consistent in how he puts the ball in the air. He has great athleticism, and he uses it on his jump shot and most players now in the NBA don’t do that.


Allen — who probably resisted the urge to simply say “He Got Game” — also told CowbellKingdom that he’s impressed by 20-year-old McLemore’s fundamentals:

We’re creatures of habit. When you play sports a certain way, it’s hard to change who you are. So, he has great athleticism, (but) you can tell whoever taught him young kept him in great form with how he shoots the ball. It really has nothing to do with age because if you’re taught the fundamentals of the game when you’re 15, you’ll shoot the ball the right way – the way you’re supposed to be (shooting). It’s just we’re so surprised (when) we see players come to the NBA, professional players that don’t have the skill-set or the fundamentals that we know we should be seeing.


Nice of you to say, Ray. But as NBATV’s Trey Kerby pointed out, McLemore still has a ways to go:

Now, to live up to these kind words, all Ben McLemore has to do is play another 16 seasons, raise his three-point accuracy five percentage points while doing so, break all kinds of records, credibly appear in a major motion picture, shave his head right when it becomes time to shave his head, always look like he’s snarling even though he’s generally happy, and win two titles while also making one of the most clutch three-pointers in league history to save a championship season. Simple stuff.


For the full quotes from Allen on McLemore, head over to CowbellKingdom.com. 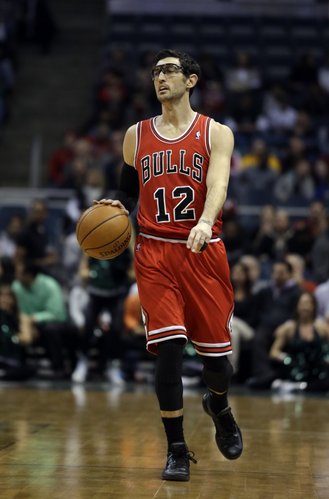 Chicago Bulls' Kirk Hinrich during the first half of an NBA basketball game against the Milwaukee Bucks Friday, Dec. 13, 2013, in Milwaukee. (AP Photo/Morry Gash)

Chicago guard Kirk Hinrich turned 33 years old on Thursday. To mark the occasion, Bulls blog PippenAintEasy.com compiled some of Hinrich’s best moments in red, white and black, including this dunk during his rookie season in 2004:

Kirk Hinrich is 4th in total assists in 3rd in APG in the history of the Chicago Bulls. A legend in his own time

Phoenix broadcaster Tom Chambers recently sat down with Suns forwards Markieff and Marcus Morris. In the two-part interview, the twins talk quite a bit about family and their lifelong dream of playing together:

Brooklyn’s Paul Pierce wasn’t happy with his team’s effort Tuesday against San Antonio (more on that in a minute), so he took his frustration out on the rim:

And Portland’s Thomas Robinson, who hadn’t played in five games, showed no rust on this slo-mo slam before a return in Thursday’s game: 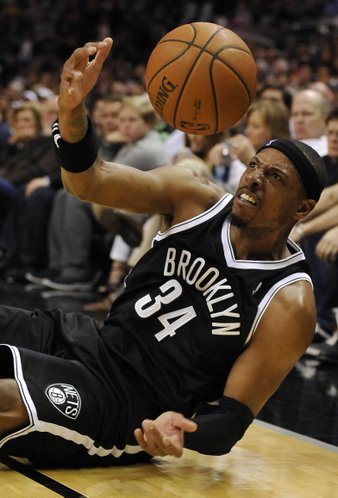 Brooklyn Nets forward Paul Pierce slides out of bounds as he chases the loose ball during the first half of an NBA basketball game against the San Antonio Spurs on Tuesday, Dec. 31, 2013, in San Antonio. (AP Photo/Darren Abate)

Brooklyn’s Paul Pierce on the Nets’ struggles, via ESPN.com:

It’s embarrassing. I don’t know if I’ve probably been a part of this many blowouts in one season already. But at some point, we’ve gotta have our pride. It has to come from each individual and say we’ve had enough of this. It’s extremely embarrassing.


Miami’s Mario Chalmers, likely flashing back to the 2008 NCAA tournament after getting torched by Golden State’s Stephen Curry on Thursday:

"You can't defend that. Once a player gets hot like that, you can't stop anybody like that."


On Portland's Thomas Robinson during Thursday's game against Charlotte, via Blazers media tweets:

I believe @Trobinson0 is yelling "lunch meat" every time Aldridge touches the ball against Josh McRoberts.

T Robinson on why he said "lunch meat" when LMA gets the ball. "Whatchu do with lunch meat? Eat it. He gets the ball and he eats all day."


Phoenix’s Marcus Morris on the Suns’ bench, via AZcentral.com:

“Once somebody cracks it open, you’ve got some wild stuff coming behind,” Marcus Morris said. “ … That’s what Coach (Jeff Hornacek) preaches. The more we get up, the more our percentages go higher.”

On the improvement of Marcus and Markieff Morris, from Phoenix head coach Jeff Hornacek, via CBS Sports’ Matt Moore:

"They were horrible defensively," Hornacek says. "Whether that was the system, or what. But we're putting a lot of responsibility on them to help out and to rotate and these guys are following it, and I think that's what's taking them to the next level."


On Sacramento’s Ben McLemore, via the Sacramento Bee:

“One thing I love about Ben is he is a great kid, his heart’s in the right place, he wants to do well,” said Kings coach Michael Malone. “He wants to watch film, learn and get better, he takes it very seriously and I know he’s going to get there and experience is the best teacher. What he went through (Sunday), even though it was a hard lesson for him and us, that’s going to help him (Tuesday) night and hopefully throughout the season.”


Remember to check KUsports.com every night for the latest line scores from the ‘Hawks in the NBA.

What did McLemore go through Sunday? I'm not really an NBA guy, but I do like to see how the boys are doing...

San Antonio's Manu Ginobili scored 28 points on McLemore and the Kings. Here's the story that quote is from: http://www.sacbee.com/2013/12/30/6037012/rookie-growing-pains-for-kings.html