Cancel the party. Return your Pelicans T-shirts (unless you only bought them to celebrate Jeff Withey).

The reunion is over, and it ended before it ever had a chance to start.

Two days after New Orleans acquired Tyshawn Taylor in a trade with Brooklyn, reuniting him with former Kansas teammate Withey, the Pelicans waived Taylor on Thursday. He never even played a game with the team.

That's life in the NBA.

"We just released him so he could go somewhere else if somebody wanted to pick him up,'' Williams said.


At least one rumor out there has Taylor possibly signing with the Los Angeles Clippers, who are down a point guard with Chris Paul injured.

Withey makes most of his minutes 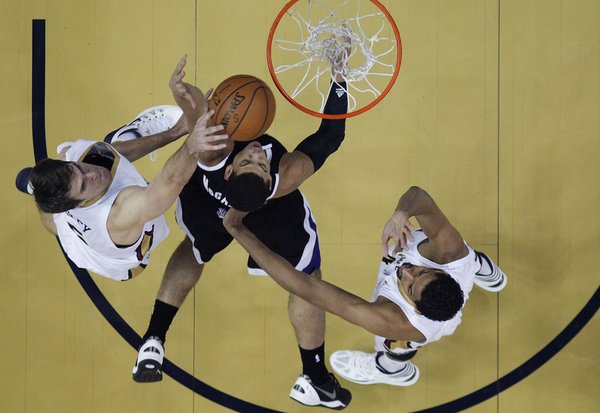 The waiving of Taylor might have been bad news for Withey, but the big man has to feel good about his last game. The Pelicans lost, 114-97, to Sacramento on Tuesday, but Withey played a season-high 27 minutes and the rookie big man scored 14 points — a new career high.

Nakla Hogan, of NOLA.com, wrote about Withey's breakout game, which included 5-of-6 shooting, five rebounds, two blocks and a pair of steals.

Withey told Hogan mental reps and practice work made him ready when his coach gave him an opportunity (his previous season high for minutes was 18):

"As a rookie, I've been watching where everybody is going and how other guys play, so now the game is slowing down for me a little bit when I'm out there," Withey said. "In the beginning of the year I would go out there and just run around like my head was cut off. Now I know the plays and where to be and now it's making things a lot easier."


In each of Withey's last three games, he has played at least 14 minutes. That's a far cry from the previous 30, in which he never played more than nine minutes and had several DNP's.

New Orleans has suffered some injuries in its front court, and that could give Withey a chance to establish himself as a key reserve:

"When I go out there with the second group I can bring energy. All my points (against Sacramento) was off dish offs. I don't create or anything. We have so many scorers on our team, I just have to be in the right place at the right time. It makes my job very easy."


Check out the highlight's from Withey's big night below. It will be interesting to see if he can keep up this kind of production and/or remain a part of the Pelicans' plans for the future. 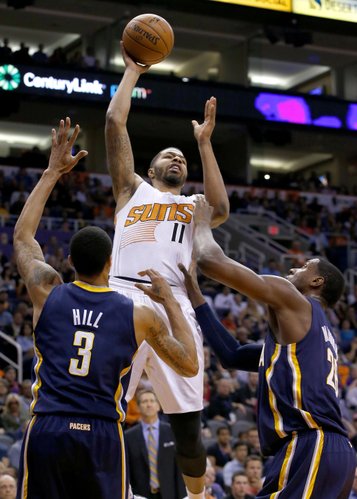 Phoenix Suns' Markieff Morris (11) gets off a shot and scores over Indiana Pacers' George Hill (3) and Ian Mahinmi, right, during the second half of an NBA basketball game Wednesday, Jan. 22, 2014, in Phoenix. The Suns defeated the Pacers 124-100. (AP Photo/Ross D. Franklin)

Throughout this season, Phoenix backup forward Markieff Morris has had a lot to do with his team's success.

It turned out he was capable of contributing to Suns losses by not playing well, too. During a recent five-game road trip, the third-year forward slumped, making just 29 percent of his shots and averaging only 6.6 points and 3.6 rebounds a game.

Suns coach Jeff Hornacek knew Morris's struggles could derail the positive momentum Phoenix (now 24-17) had created this season, as one of the NBA's more surprising teams — during the road trip, Phoenix went 1-4.

In a radio interview detailed by Vince Marotta of ArizonaSports.com, Hornacek said he spoke with the big man about busting out of the slump:

"Basically, I grabbed him after practice one day and I said 'Markieff, we need you, you're our key guy off the bench, but the only way you're going to get out of this is to play as hard as you can.' That's how you get back into it," Hornacek said. "I think guys kind of go through the motions sometimes. I think he fell a little bit back into his habit of last year -- just kind of floating around and not really running and making hard moves offensively."


Morris had no trouble responding. He's averaged 20.8 points in Phoenix's last four games (all at home), and the Suns went 3-1, with a 124-100 blowout victory over the league's top team, Indiana, on Wednesday night in Phoenix.