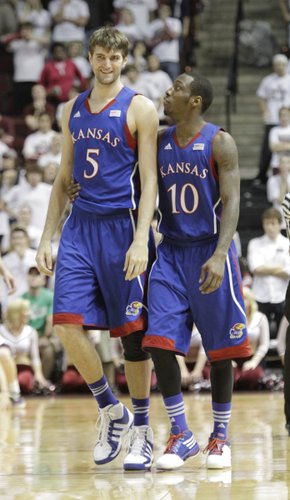 Jeff Withey (5) gets hug from Tyshawn Taylor (10) after a rebound and drawing a foul, in the last minute of the Jayhawks 66-58 win over the Aggies of Texas A&M. by Mike Yoder

Look who is back together again.

Former Kansas standouts Jeff Withey and Tyshawn Taylor will be teammates once more — this time in the NBA, with New Orleans. So run out to the store and buy all the Pelicans gear you can. (Actually, not sure which would be more difficult: finding Pelicans attire or not being ridiculed for wearing Pelicans attire.)

And what better place to reunite than New Orleans, the site of the 2012 Final Four? After all, Taylor and Withey helped Kansas beat Ohio State in the national semifinals in the very city they will both now call home.

The trade that sent Taylor away from Brooklyn (and another former Jayhawk, Paul Pierce) became official Tuesday morning. As reported by John Reid of NOLA.com, the Nets dealt Taylor for cash and the draft rights to Edin Bavcic.

The Pelicans likely made the move to add depth in the backcourt because starting point guard Jrue Holiday is sidelined indefinitely with a fractured tibia.


Taylor's only averaging 3.9 points and 1.6 assists in 11.7 minutes a game this season, so it will be interesting to see whether Pelicans coach Monty Williams makes him a small part of the rotation or if Taylor will take on the same role he had in Brooklyn.

That remains to be seen, and the move definitely makes it seem like New Orleans might like Taylor, because the franchise had other options, as pointed out by NOLA.com's Nakia Hogan:

Instead of calling up NBA D-League leading scorer Pierre Jackson, whom the Pelicans hold the rights to, or standing pat with young guards Austin Rivers and Brian Roberts, the Pelicans looked to Taylor.


Whatever happens, it's safe to assume Taylor will spend more time on the floor than his old buddy, Withey, who is averaging 6.0 minutes a game. 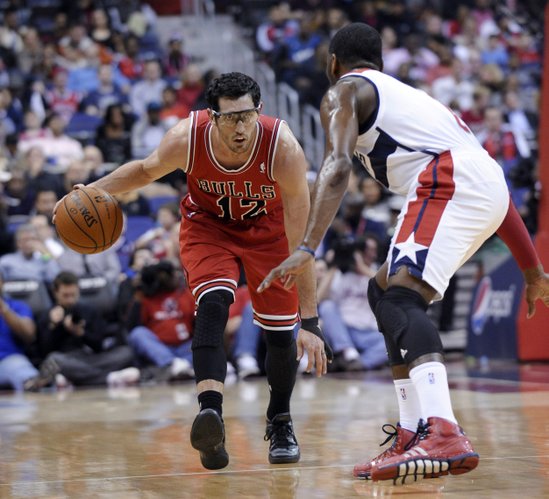 A little while back, trade winds started swirling and whispering the name of Chicago Bulls guard Kirk Hinrich, with hints floating around that he could be dealt to Golden State.

If the 11th-year NBA veteran could call the shots, though, he would at least stick with the Bulls for the remainder of the season, before his contract expires.

The one-time Jayhawk, who teamed with Oklahoma City's Nick Collison to lead Kansas to back-to-back Final Fours in 2002 and 2003, told the Chicago Tribune's K.C. Johnson he wants to keep playing as long as he can be effective, and right now he'd prefer that happen in a Bulls uniform.

"I'm happy here," Hinrich said. "I came back here because I wanted to be here. I still like our team. I get along great with the guys. We've been playing well lately so I just want to keep that going."


A trade to Golden State for Hinrich very well might be dead. The Warriors addressed their need for point guard help by acquiring Jordan Crawford from Boston. None of the talk gets to Hinrich, though.

"It's out of your control so you just keep going and trying to take care of business and focus on what we're doing here," he said. "It's not the first time my name has been in trade rumors. It's something I'm kind of used to and don't read too much into them."


In some possible bad news for Hinrich, he suffered a hamstring injury in Chicago's Monday night win over the Lakers.

Good time for a vacation 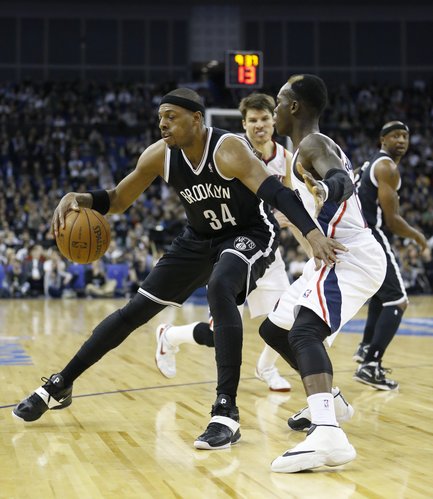 The Brooklyn Nets went on holiday to London last week for an NBA excursion against Atlanta, and amid the sight-seeing and exploring Paul Pierce scored 18 points in a 127-110 Nets victory.

Here is Pierce discussing the trip and the importance of winning this showcase game:

Seems like he enjoyed the trip, though it took some adjusting:

What time does the sun wake up in London it's 7am pic.twitter.com/VomeACnrua

Brooklyn, which got off to a dreadful start this season, despite acquiring Pierce and Kevin Garnett (and Jason Terry, if you want to count him) from the Celtics in an off-season mega-deal, has won seven of its last eight games to climb into the No. 7 spot in the putrid Eastern Conference.

Even with a dud of a 1-for-4, three-point night Monday in the Nets' win against New York, Pierce is averaging 14.3 points, 3.9 rebounds and 3.5 assists in the Nets' last eight games, as Brooklyn appears to finally be living up to its expectations.

Get daily stat updates for all of the 'Hawks in the NBA at KUsports.com.

I enjoy reading about our Jayhawks in the pro leagues. They will always be beloved ambassadors for Kansas.

One exception in this column is the use of the word "putrid" in the final paragraph. There are, no doubt, readers of your column who might not fully agree with your subjective criticism, including Pierce and Tyshawn. Easy to just leave the word out, or find a milder adjective.

He was referring to competition in the Eastern Conference where currently an 18-25 record gets you into the play-offs. There are only three teams with a winning record in the conference and one of those teams is 21-19. That's pretty putrid.

Actually Withey is likely to play more than Taylor in New Orleans. The Pelicans have lots of guards. Withey had a career high 14 points in last night's game and has been playing more of late. With Jason Smith injured, he has a chance to earn more time. The broadcasters were really praising him during yesterday's telecast.

Taylor already got waived by the Pelicans. So much for that reunion.