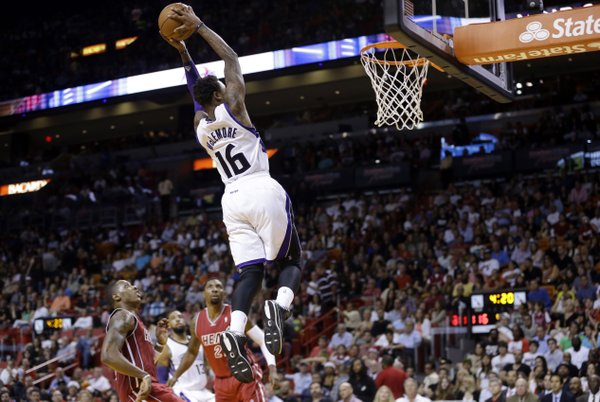 Sacramento Kings' Ben McLemore (16) shoots in the second half of an NBA basketball game against the Miami Heat, Friday, Dec. 20, 2013, in Miami. The Heat defeated the Kings 122-103. (AP Photo/Lynne Sladky)

Look. Everybody could see this was coming. All the revealing signs were there:

Well, finally McLemore got what he deserved. The NBA announced on Thursday that the 6-foot-5 rookie shooting guard (who was snubbed for the Rising Stars Challenge) will be a part of All-Star Weekend after all — as one of six participants in the Sprite Slam Dunk contest.

McLemore has some serious competition this year. Sometimes these made-for-TV dunk shows are unwatchable. But that won't be the case on Feb. 15 in New Orleans.

The high-flying former Jayahawk will go up against Paul George of the Indiana Pacers, John Wall of the Washington Wizards, Harrison Barnes of the Golden State Warriors, Damian Lillard of the Portland Trail Blazers and defending dunk contest champion Terrence Ross of the Toronto Raptors.

Get a glimpse of McLemore's competition here: The Definitive Guide to the 2014 NBA Dunk Contest (courtesy of USA Today's For The Win).

A young and dynamic finisher, and the first KU product to participate in the NBA slam dunk contest, McLemore obviously can't wait for the chance to show off some of his fierce slams with the entire league watching — not exactly the case for most Sacramento games.

Appreciate all the love. Excited to be in @nbaallstar Slam Dunk Contest. Let's get it!

Here are a few more looks at what 20-year-old aerial artist has to offer: