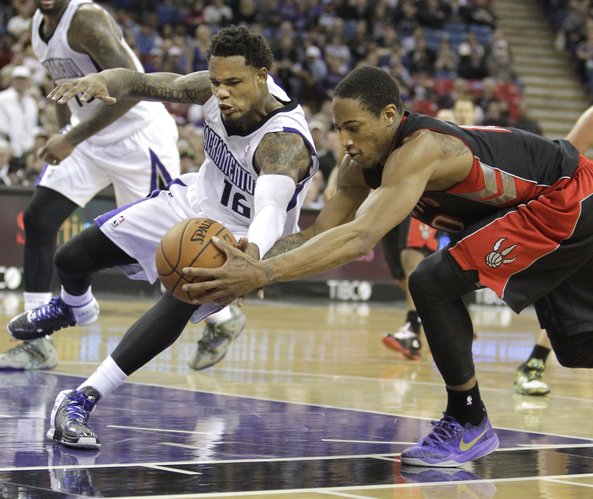 If the Sacramento Kings have their way, they will find out before the season ends exactly what rookie shooting guard Ben McLemore can do for their franchise.

Both words and actions from the organization this week displayed Sacramento's interest in keeping the 21-year-old around long enough to see his full potential.

As reported by Jason Jones of the Sacramento Bee, the Kings showed their belief in the rookie out of Kansas, not only by openly dispelling trade rumors (a prominent one had McLemore as part of a package to land Boston point guard Rajon Rondo), but also dealing away Marcus Thornton, who had been the team's starting shooting guard.

Thornton's former spot in the lineup is McLemore's now, and clearly management wants to see what he does with it.

The Kings (18-36), last in the Pacific Division out West, aren't going to make the playoffs. So Sacramento coach Michael Malone will be watching closely during the next couple of months:

“My main thing moving forward is Ben McLemore,” Malone said before Wednesday’s game. “And that’s no disrespect to anybody, but we drafted Ben seventh, and it’s been an up-and-down season for him at times. But with these last 29 games, there’s no pressure on this team. I want us to play together, I want us to play the right way. I want us to have fun, and I also want to have a great opportunity to see Ben, Ray (McCallum), Carl (Landry) and Derrick (Williams). Especially to see what they’re able to do with the last 29 games.”

In McLemore's return to the starting lineup Wednesday against Golden State (he started 26 games earlier this season), he found himself in some foul trouble, only played 19 minutes and went 1-for-4 from the floor with four points and four rebounds.

Blake Ellington at SactownRoyalty.com breaks down some of McLemore's issues on the floor, which have included "disappearing" for long stretches, playing passively and lacking consistency on his jumper.

(Disclaimer: Steph Curry does that to lots of people.)

The rookie's next opportunity to prove he should be part of Sacramento's core for the future comes Saturday night against Boston — the game can be seen on NBATV, at 9 p.m.

For more on McLemore, listen to an interview he did with Fescoe in the Morning, on 610 Sports Radio.

McLemore's interview begins at about the 32-minute mark and he talks about adjusting to the NBA, the slam dunk contest at All-Star Weekend, hearing about trade rumors and taking the next step in his career.

In 'Hawks no longer in the NBA news:

Roughly a month after Brooklyn traded him and New Orleans waived him, it appears Tyshawn Taylor is through with the D-League for this season.

Taylor had signed with the Maine Red Claws, and only scored five points in his last outing on Wednesday night.

The next day, news began to pop up on Twitter about Taylor signing with a club in Puerto Rico.

Former Net and Kansas G Tyshawn Taylor signed with Atléticos in Puerto Rico, according to @JMT_PR. Team will also work out Aquille Carr.

None by Adam Zagoria

'Blake Ellington at SactownRoyalty.com breaks down some of McLemore's issues on the floor, which have included "disappearing" for long stretches, playing passively and lacking consistency on his jumper.'

What I get out of this is that there is something to be said about staying in school to grow in maturity, not just improve talent. Conventional wisdom around the world of college hoops seems to suggest that one should leave for the NBA if there is little more to improve staying another year from a talent standpoint.

To me those issues mentioned above all seem to derive from a simple lack of maturity, something I think he could improve on more under the tutelage of HCBS than in the league. Another example of this that comes to mind is Micheal Beasley.

Of course for McLemore there is also the money and his family's financial situation that played a major role in his decision.

Amen all over the place! I've been saying this for a long time. Wiggins will probably make the jump and be a OAD, but I have made the case that he should at least consider staying one more year for the very reason you bring up. He lacks aggressiveness at times and there is a gap between his production (which is great for anyone else, but this is ANDREW WIGGINS) and his potential. Wiggins could be Durant-like or Beasley-like on the college level. Even Beasley, after having dominated on this level, has not gone on to be a big performer in the NBA. Wiggins is not yet on par with Beasley's performance on the college level.
Embiid not only lacks some fundamentals (though he gains ground at break-neck speed), but he lacks BASKETBALL maturity as well. Selden's athleticism is not in question, but he can also make strides mentally (knowledge and maturity).

Ben has a golden opportunity but the opportunity won't last for long. If you can't stand out on the Kings roster you will be lucky if you can ride the pines on another NBA team.