Time for Ben McLemore to shine 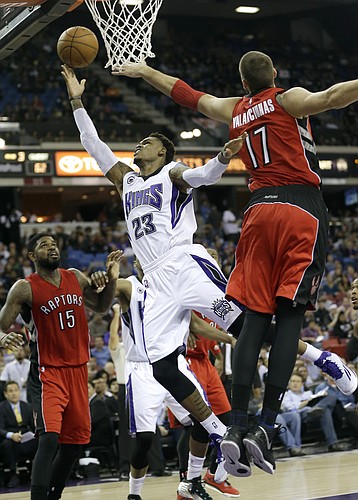 Rarely does the NBA spotlight shine toward small-market Sacramento. Right now, it’s pointed to the home of the Kings for all the wrong reasons.

What better time for second-year shooting guard Ben McLemore to help turn a negative into a positive?

Sacramento’s front office has been pummeled with scrutiny the past couple of days, and rightfully so. The Kings (11-13) fired their head coach, Michael Malone, Sunday night, with the team having lost seven of nine games. Keep in mind, Sacramento’s franchise player, center DeMarcus Cousins, missed each one of those with viral meningitis.

It’s a raw deal for Malone, for sure, and multiple reports indicate the move was more about a difference in philosophies between the coach and the front office, which used the skid as an excuse to give the coach the axe.

The Kings will play their first game since the dismissal Tuesday night against Oklahoma City — 9:30 Central tip, on ESPN. So McLemore and his teammates have a chance to shift the focus toward the promise this team has going forward under interim coach Tyrone Corbin, with Cousins reportedly returning later this week.

The franchise’s decision-makers might act a tad wacky from time to time (Yahoo’s Adrian Wojnarowski reported owner Vivek Ranadive wants to employ a cherry-picking strategy). But the decision-makers at least have shown patience with McLemore, who didn’t assimilate too quickly his rookie season.

The former Kansas standout has made strides as a sophomore, thus far avoiding any serious slump, with the most promising evidence for improvement showing up in his shooting percentages.

Bleacher Report’s Sim Risso detailed McLemore’s development in a feature, and the 21-year-old said much of it has to do with confidence.

"I’ve just continued to believe in my shot and believe in my game. My teammates are doing a good job with that. My coaches have been running early plays for me and getting me going early."

As Risso points out, McLemore’s usage percentage has gone up with Cousins out of the lineup. The athletic second-year guard with the smooth shooting touch (42-of-102 from 3-point range) said Cousins did a good job of finding him for open looks, and Rudy Gay and Darren Collison continue to do the same.

McLemore is averaging 13 points a game in December, and scored 21 against Houston on TNT last week.

The Kings looked like a surprising playoff contender in the treacherous Western Conference before Cousins’ illness. We’ll see if McLemore and his teammates can rally around this shakeup and get back in the mix.

They enter Tuesday’s game tied for 10th place in the West with their opponent, OKC.

On a much lighter note, McLemore had a productive day off Monday. He took a group of Sacramento kids out shopping for holiday presents.

This one a problem already. Lol. She knew how to shop. Showing off the new red shoes I just bought her. #lovethekids pic.twitter.com/WoE6CtPLiV

There’s proof: Not everything is negative in Sacramento.