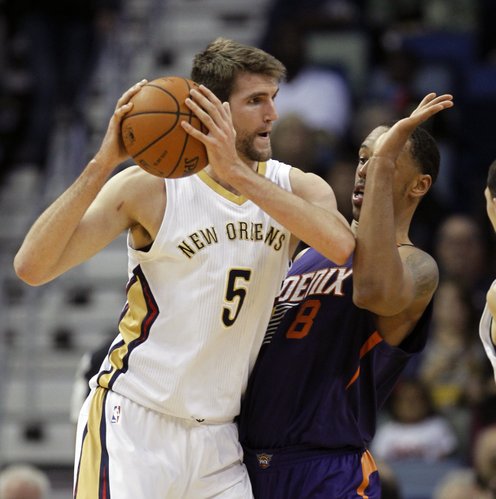 Let's face it. Jeff Withey's transition to the NBA has had its down moments in his rookie season.

But as his first-year campaign reaches its final week, it appears the lean 7-foot center out of Kansas might be finding his way in New Orleans. While Withey's season averages of 3.0 points and 2.4 rebounds in 10.9 minutes a game are about as exciting as a Utah vs. Milwaukee game, he has proven of late he can produce when given the opportunity.

Earlier this week, Darrell Williams wrote about how Withey's growth has pleased the Pelicans. The team's coach, Monty Williams, told the New Orleans Advocate Withey has helped offset some of the Pelicans' injury problems of late.

“Jeff has come a long way this season. He looks nothing like the guy we saw in training camp. He has worked hard. His body looks different, and he has made progress on the court working with (assistant coach) Kevin (Hanson).”

After developing into a hard-nosed defender of the rim at KU, Withey had to acclimate himself to playing in the paint in the NBA, where things can get rough.

“You don’t have to be big to be physical. Some of it definitely is that the game has slowed down for me now. I understand things a lot better.”

With New Orleans star Anthony Davis sitting out Wednesday due to back spasms, Withey tried to carry the team himself in a 94-88 Pelicans loss to Phoenix. Withey scored 17 points — a career high — and added a couple of rebounds, three assists and a block.

The backup center and his bench mates helped get New Orleans back in the game, John Reid wrote for The Times-Picayune. The rookie big man out of Kansas had this to say:

"We try to bring a spark to our team when its needed. We definitely played pretty well tonight.''

New Orleans lost its sixth game in a row, but it was definitely Withey's night. If the numbers and highlights don't prove that, this GIF should. 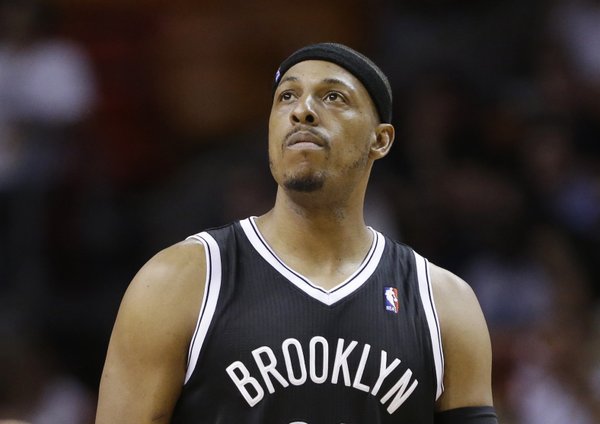 Brooklyn Nets forward Paul Pierce is shown during the second half of an NBA basketball game against the Miami Heat, Tuesday, April 8, 2014 in Miami. The Nets defeated the Heat 88-87. (AP Photo/Wilfredo Lee)

After scoring 14 points to help Brooklyn complete a four-game season sweep of two-time defending champion Miami earlier this week, the man known as "The Truth" appeared in no hurry to reach a significant milestone.

Pierce sat out the Nets' loss at Orlando Wednesday due to a right hip pointer injury, even though he currently needs just five points to reach 25,000 for his career.

As Rod Boone of Newsday reported, the only active players who have put up that many points are Pierce's Brooklyn teammate Kevin Garnett, the Los Angeles Lakers' Kobe Bryant and Dallas star Dirk Nowitzki.

As Pierce closes in on the elite mark — only 17 players in the history of the NBA have scored 25,000 career points — it's probably safe to assume the former KU All-American is on his way to the Hall of Fame.

Pierce could reach the landmark number as soon as Friday night against Atlanta. If not then, the Nets have three more regular-season dates in the coming week.

Brooklyn, which began the season looking woeful but now has a playoff spot in the East locked up, could be the final stop in Pierce's illustrious career. Speculation already has begun that he will re-sign with the Nets.

Second-year power forward Thomas Robinson has made his share of incredible plays this season for Portland.

But there might be a new champion in the category of most remarkable YouTube clip starring the man known in Lawrence as T-Rob.

The 6-foot-10, powerful sub and a few of his teammates appeared on an episode of the IFC series Portlandia.

The show's stars, Fred Armisen and Carrie Brownstein, play a pair of feminist dance team coaches who try to give the Trail Blazers a pep talk after a loss.

In other words: This is amazing.

Robinson got to roll his eyes, shake his head and deliver a few of straight-faced lines. Not bad for an acting debut. (For a professional athlete.)

Only six days remain in the 82-game marathon that is the regular season, so here's a look at where all of the NBA's Jayhawks stand in the hunt for the playoffs.

That IFC series Portlandia. clip with T-Rob was really dumb. Makes one wonder.

the series is a right on target satire of portland culture...watch a few episodes on netflix. they can be pretty funny. very portland, this clip.

It was the third or fourth part of a sketch that recurred throughout the episode. You'd have to see the other parts to be able to follow it (at the very least, as those are also recurring characters.)

Phoenix now is one game behind Memphis for th #8 seed in the west, but I believe that though the two teams play eachother tonight, Memphis holds the tie-breaker already.

Phoenix needs to beat Memphis and win at Sacramento, and they need Memphis to lose against Dallas.

So they're not eliminated yet, but they need help from Dallas in order to get into the playoffs.

Hopefully they will make it in, it would give us a good chance to see the Morris twins in action few a few more games.