Collison's decade of dirty work makes him indispensable in OKC

All the NBA talk around Lawrence the past few days has centered on Kansas University freshmen and their decisions — Andrew Wiggins is officially entering the draft, and everyone is waiting to hear if Joel Embiid will do the same.

This time next year, we might be debating whether Wiggins or Embiid deserve to win the NBA's Rookie of the Year.

But for now, with the 2013-14 NBA season winding down, we'll check in with a couple of veterans and a current rookie. 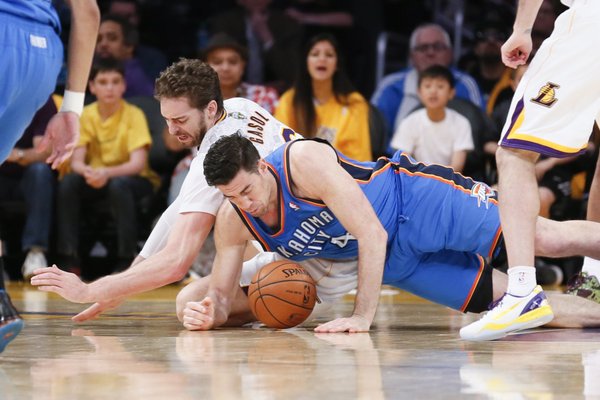 When your career averages are 6.6 points and 5.7 rebounds, you have to be doing something right to stick around in the NBA for a decade.

For 10th-year power forward Nick Collison — selected 12th overall by the Seattle Supersonics in the loaded 2003 draft —becoming the ultimate role player enticed the franchise that picked him (Seattle relocated to Oklahoma City and changed its name to the Thunder following the 2007-08 season) to keep him around.

As Darnell Mayberry points out in his profile on Collison for The Oklahoman, the veteran out of Kansas is one of those rare NBA players who have spent the past 10 seasons with the same franchise.

FYI, some of those other names are: Kobe Bryant, Tim Duncan, Dirk Nowitzki and Dwyane Wade.

“I know it’s really rare for somebody to be able to stick that long. And now, to be successful at the end part of it, too, to build up to being a really good team at the end, that’s how I would want it to go.”

The reliable backup big man averages just 4.2 points and 3.7 rebounds in 17.0 minutes a game for OKC (54-19), but general manager Sam Presti calls him a "founding member" of the Thunder, along with superstars Kevin Durant and Russell Westbrook.

“He represents the type of player that we want to ultimately have our organization embody,” Presti told Mayberry.

Between charges, screens, hustle plays, easy second-chance buckets, and defensive stops, you can see why the Thunder have kept Collison around.

And why he has become a fan favorite. Here's what Collison said to Mayberry on that subject:

The Thunder currently hold the No. 2 seed in the Western Conference and are one of the favorites to win the 2014 NBA title. 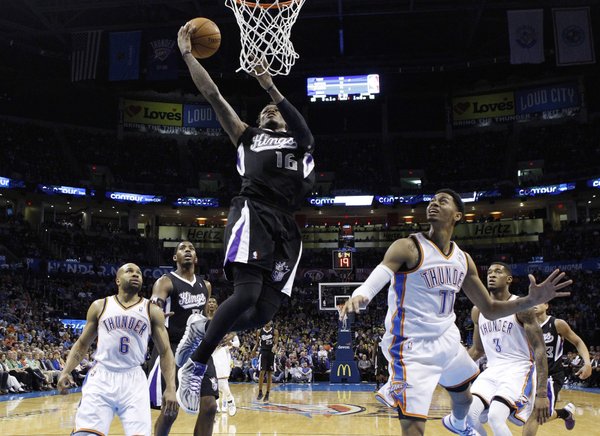 It would be a stretch to say Ben McLemore's rookie season in Sacramento has been a complete success.

Even though the Kings have shown their commitment to the young guard, he hasn't separated himself as one of the league's very best first-year players.

Still, Jason Jones of the Sacramento Bee wrote that the youngster out of Kansas is settling in to his position as the Kings' starting shooting guard.

Sacramento spent the opening months of the season bringing the rookie along slowly, but McLemore told Jones his confidence began to grow after the franchise dealt starter Marcus Thornton, opening a spot in the starting rotation for the former Jayhawk.

The best news for McLemore and Sacramento? He is starting to take his game to another level in the closing weeks of the season.

Monday night at New Orleans, McLemore scored 14 points and grabbed five rebounds (he has only averaged 2.8 boards on the year).

In Jones' feature on the developing shooting guard, Kings coach Michael Malone said McLemore knows these late-season games with Sacramento (26-48) are his chance to shine.

“He’s just kind of relaxing, stopped putting so much pressure on himself where he feels he has to make every shot, and he’s just going out there and playing,. And he’s taking the shot and shooting it with great confidence.” 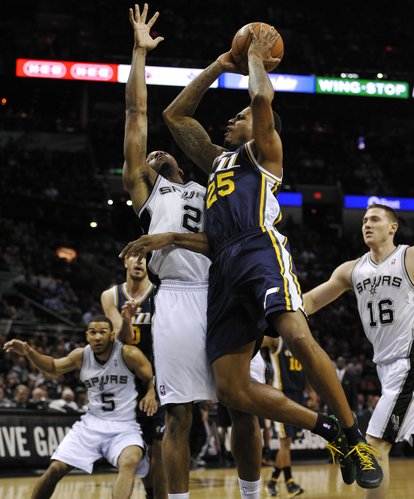 When you're an NBA veteran at the end of a team's bench, often picking up the dreaded DNP in the box score, it has to get under your skin.

Utah shooting guard Brandon Rush is living out that reality. He has played in 38 games, and averaged a minuscule 2.1 points and 1.2 rebounds in 11.0 minutes a game — far below his career averages of 8.3 points and 3.3 rebounds in 24.9 minutes.

So Rush will have to forgive Desert News reporter Jody Genessy if he truly misinterpreted this tweet from the sixth-year pro following another DNP against Memphis last week.

Genessy asked Rush about the meaning of his four-word declaration a few days later. Rush told the reporter he was communicating with a cousin in that particular message.

But Rush admitted to Genessy that this season with Utah (23-52) has been "a little frustrating."

“It’s been up and down. It’s not what I expected. But I just fight through it and continue to try to get better, try to get this knee right for summertime. It happens.”

As noted by Genessy, Rush missed basically all of 2012-13 due to an ACL injury.

He'll be a free agent at the end of this season. And you don't have to read into Rush's tweets to figure out he won't be in Utah's training camp next fall.

Only a couple of weeks remain in the regular season, so here's a look at where all of the NBA's Jayhawks stand in the hunt for the playoffs.

Best defender, best footwork, knows exactly where to be every time. He's great.

We have Jr. Fundamental heading into his third season at KU. Perry often reminds me of Collison. Mostly offensively, of course.

Meanwhile the Bulls, Nets, and Wizards (hovering around 0.500) all with worse records than the Suns are nearly all locked in to the Eastern Conference Playoffs.

Right on. The East is horrible. Phoenix still has a shot to play itself into one of the last 3 spots in the West, though. And Suns are 8-2 in last 10, so no signs of a collapse. It would be fun to watch the Morrii vs. Spurs, Thunder or Clippers in a 1st-round series.

So here's a question to ponder - assuming there's no way Wiggins comes to KU if McLemore was still there...would KU have been better off with a redshirt sophomore McLemore versus a true freshman Wiggins?

Defensively, Wiggins probably was better though a 2nd year in Self's system would have made McLemore a pretty darn good defender too, I would hope.

And yet Naadir's single night of dirty work makes him easily dispensable at KU.

One night? Try getting benched multiple times this year for not being able to keep his head on straight. The off-court issues were just the final straw for a lot of people.