It really wouldn't be the 'Hawks in the NBA without some ridiculous highlights, would it?

There was a Thanksgiving feast of dunks from Kansas products damaging rims around the Association this past weekend.

Before we dig in to the main course, the always reliable Morris twins provide some appetizing fix'ins in Orlando. 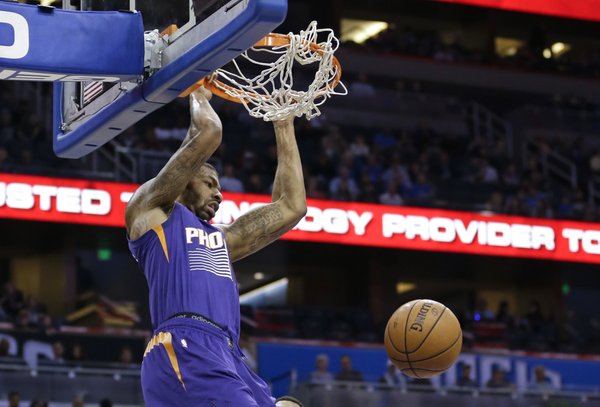 Phoenix Suns' Markieff Morris dunks the ball against the Orlando Magic during the first half of an NBA basketball game in Orlando, Fla., Sunday, Nov. 24, 2013.(AP Photo/John Raoux)

Pretty cool little improvisation here. Marcus Morris comes off a screen set by brother Markieff, and just when you think Marcus is rising up for the jumper, he notices Keef rolling to the paint and just lofts an easy lob for a Morris-oop.

Both twins produced in the win against another former Kansas star, Orlando Magic coach Jacque Vaughn.

So maybe the Morris Bros. Mystery is solved. Here is what Markieff had to say about the matter, as Paul Coro of AZcentral.com shares in his piece:

"I had a talk with Coach and he said I have to get my swag back. When I got sick, I felt like I lost it a little bit. Tonight, I was out there for a while and I thank coach for just letting me play so I can find it."

All right, on to what everybody has been waiting for on Thanksgiving week. Phoenix's Morrii brought the rolls, green beans and essential sides, but Sacramento rookie Ben McLemore delivers the turkey, stuffing and pumpkin pie. 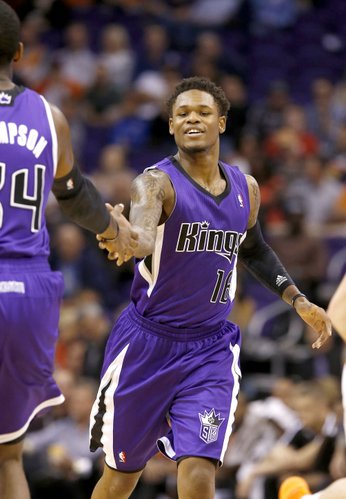 You'd be in the holiday spirit, too, if you had this kind of weekend in L.A.

McLemore's one-on-none fast-break flight against the Los Angeles Clippers is just the latest in what is becoming a nightly expectation for the ridiculously athletic shooting guard.

Notice where he takes off on that? And how high he explodes for his sky-walking trip? That highlight alone would be enough to keep some players satisfied with their baller status for the rest of the season. Yet, here's another McLemore jam the very next night — back in Staples Center, but this time against the Los Angeles Lakers.

Sure, there is zero deterrence put forth by the Clippers or Lakers in these McLemore take-off scenarios, but that doesn't make them any less impressive. I mean, look at this photo of the first dunk from a tweet by @Jim_ICE: 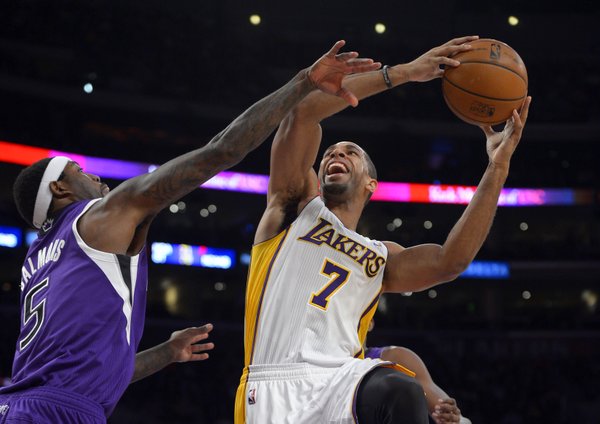 Xavier Henry continued his fight to remain relevant in the NBA, against Sacramento. It seemed like Henry might have been out of the league by now after his first three seasons with New Orleans. But he's the kind of athlete/gunner that can thrive in Lakers coach Mike D'Antoni's system — especially considering the Lakers need all the help they can get while Kobe Bryant is out.

Mike Bresnahan writes in the Los Angeles Times that Henry improved his free-throw shooting in the Lakers win, and scored 12 of his 21 points in the fourth quarter.

The Lakers (7-7) might not be a contender anymore — even when they get Kobe back. But Henry seems to be enjoying the ride.

Fun from winning locker room Friday night: Xavier Henry was trying to get Nick Young to give him Rihanna's phone number after the game. 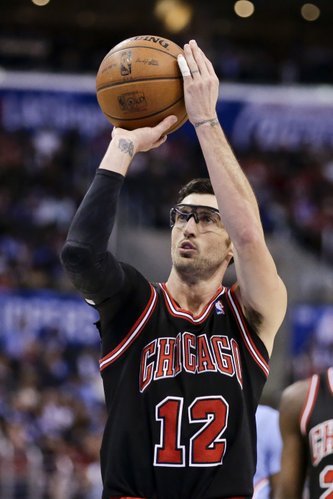 If you're a fan of the NBA, you've already heard the horrible news about Chicago point guard Derrick Rose. The 2010-11 NBA MVP missed the entire 2012-13 season while recovering from a torn ACL in his left knee. Then he tore the meniscus in his right knee Friday at Portland.

There is no reason to celebrate this, and if you do, you're just a sicko. But this means former KU star Kirk Hinrich will see a lot more minutes for Chicago. We'll probably see a lot more Hinrich production, and possibly more amazing screen grabs, like this one from Deadspin, which shows Hinrich tying up Denver's Nate Robinson and giddily smiling. 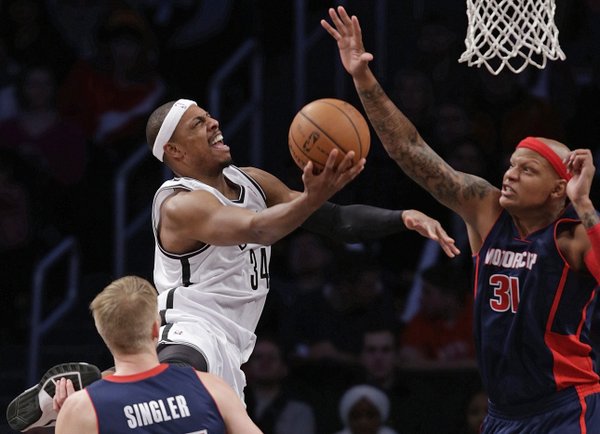 Paul Pierce isn't injured, but he's probably sick of the struggles he and the high-paid Brooklyn Nets (3-10) have endured so far this season.

For his career, Pierce is a 44.7-percent shooter, making 36.9-percent of his threes and averaging 21.7 points. Maybe it's his new digs, away from Boston, where his jersey will one day be retired in the rafters, or maybe it's his 36-year-old legs finally wearing down, but Pierce hasn't produced the way many around the league expected him to.

Pierce is averaging just 13 points, hitting 37.9-percent of his shots and 27.9 from downtown.

The Truth's numbers improved slightly on Sunday, against Detroit: Pierce had 19 points, went 5-for-13 and hit two of his four three-pointers.

— Don't forget, keep up with all the 'Hawks in the NBA and their statistical output every day at KUSports.com.

It is just unfair that dunks like McLemore threw down in those two videos get the kind of crowd/announcer response that they do.

If he threw that freethrow line airwalk down in the Phog, the roof would simply blow off.
The NBA ruins it for a kid like McLemore. He clearly enjoyed KU as much as we enjoyed him and was less than subtle about wanting to come back, but it is just a classic example of there being a price on everything.
I bet there are players who would take 3/4 of the money they would make playing 3 years of NBA ball to stay in college 4 years.

PS - I could fall asleep to more exciting commentary than those announcers.

In all fairness, they were both road games, meaning road crowds and road announcers. It would be the same way if Marcus Smart threw down a mean dunk in Allen Fieldhouse.

That is true, but they were both in-state road games. I assume there are a few Kings fans in LA.

I've been to a Lakers game in Staples. I was bored out of my wits and they couldn't have paid the crowed to clap along to their generic 'Let's Go!' sound clip.

It isn't even in the same galaxy as the experience in Allen Fieldhouse. It isn't fair to compare the two really, but that is the whole point. The NBA experience sucks.

I'll agree the NBA sucks. I am not a fan, and only try to pay attention to former Jayhawks, otherwise I would pay zero attention. I was just trying to rationalize why there was no ovation from the crowd on the dunks.