Family Over Everything (except dunks)

First, it was Xavier Henry welcoming Jeff Withey to the NBA. Now, it’s “little brother” Thomas Robinson taking it to big bros Marcus and Markieff Morris. I think we’ve found an exception to “Family Over Everything.”

Let’s face it, we’re living in an era of unprecedented Jayhawk-on-Jayhawk crime, and KU coach Bill Self isn’t doing anything to stop it. Might as well just turn on the tube, sit back and enjoy the show.

The rest of the T-Rob Show 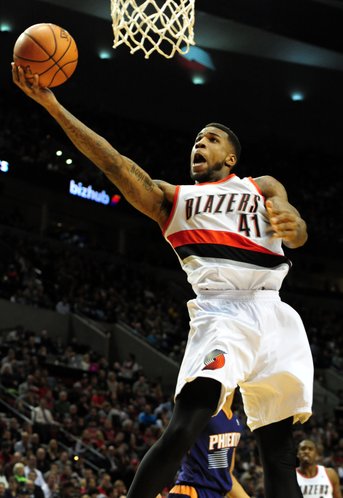 Portland Trail Blazers power forward Thomas Robinson (41) drives to the basket during the fourth quarter of an NBA basketball game against the Phoenix Suns on Wednesday, Nov. 13, 2013, in Portland, Ore. The Blazers won the game 90-89. (AP Photo/Steve Dykes)

Robinson’s Wednesday night was punctuated by the putback, but he did quite a bit more to help the Trail Blazers beat the Suns.

Robinson scored nine points and collected six rebounds with a block and a steal in 10 fourth-quarter minutes, and Portland outscored Phoenix 24-19 when T-Rob was on the floor. Not too shabby in a one-point victory.

Maybe more importantly, the first-year Blazer provided some of his trademark energy. From blazersedge.com:

"I don't know if there was one play (for Robinson)," Blazers coach Terry Stotts said. "It was just the whole energy at both ends of the floor, getting rebounds, getting out, obviously the dunk was a big play. The general feel for that stretch, I thought there was a stretch of (positive) momentum, the dunk was certainly part of it."

A couple other fun notes, with another hat-tip to Blazersedge:

Thomas Robinson on his dunk: "I went after the board.., I stretched out and had it. It was cool. My eyes were probably closed to be honest."

Not just a dunk prop 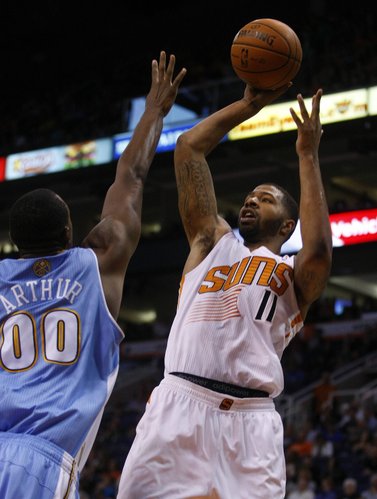 Markieff Morris earned Western Conference Player of the Week honors with a fantastic four-game stretch good for 22.8 points (69.8 percent shooting), 8.0 rebounds and 2.0 steals. And even after playing under the weather and dropping an eight-point dud against the Blazers, Keef is fourth in the NBA in field-goal percentage (60.0 percent) and ninth in basketball’s all-encompassing P.E.R. stat (26.1).

Twin it to win it 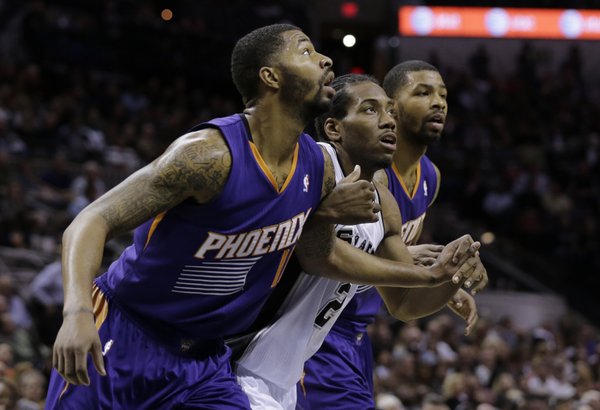 Markieff and Marcus Morris have been a big part of the Phoenix Suns’ surprising 5-3 start. The twins have come off the bench together in all but one game this season (Markieff was suspended for the opener). In those seven games, Markieff’s played 199 total minutes and Marcus 155. They’ve shared the majority of that time (125 minutes or about 18 minutes a game). And over the last five games, the Suns’ bench has been the No. 2 scoring bench in the entire league and the best per minute.

Phoenix coach Jeff Hornacek on Marcus and Markieff, from azcentral.com:

“They have been great together and great with the guys on the court,” Hornacek said. “It hasn’t been what we call ‘brother ball,’ where they just pass to each other. They just happen to be out there together now, playing the game.”

The twins are loving their success as reserves, too. From azcentral.com, again:

“This definitely works,” Marcus said. “We still play together. We’re both successful at what we’re doing. If I get a couple more buckets to fall, I’ll be right there where ‘Kieff’ is at. I don’t want to switch it up. We’re going so well. Why change something that’s going good? Just keep riding with it and hopefully ‘Kieff’ can fight for Sixth Man of the Year. I don’t see him going down from here because his confidence is real high.”

Despite a desperate need for big bodies, the New York Knicks have played backup center Cole Aldrich just 10 total minutes and only three of their eight games this season. Cole’s not letting it affect his, um, enthusiasm for the game.

“I’d also mention he’s the Thunder’s best on ball defender in the post and his hedges are so pristine they should be featured in Southern Living.”

Markieff Morris, via the Arizona Republic:

“I heard the other day that I’m the skinniest power forward in the league,” Markieff said, referring to strength and conditioning coach Mike Elliott’s ribbing. “I might be the skinniest, but I’m damn sure not the weakest.”

On Ben McLemore, who started his first game Wednesday, via the Sacramento Bee:

“Sometimes you have to let a guy – kind of throw him out there a little bit – and let him learn from those mistakes and get those experiences under their belt,” (Kings coach Mike) Malone said. “The bottom line is experience is the best teacher, and for him being out there against All-Star-type players, that’s the only way he’s going to learn and get better.”

On Kirk Hinrich, via the Chicago Tribune:


"He didn't really go too hard on them," Gibson said. "He's just so cocky when it comes to his school. He's in the corner all nonchalant like, 'Yeah.' He always thinks he doesn't have to say much because he just knows Kansas is always going to win."

Can’t get enough of your favorite Jayhawks in the NBA? Be on the lookout for our nightly “How former Jayhawks fared…” stat recaps. Look for them on the KUsports.com homepage or this nifty, bookmarkable landing page.

In case you’ve missed any, here are the past few days:

And be sure to come back to the blog as we turn stodgy stats — Ben McLemore’s 1-for-8 Wednesday, for example — into something a little more exciting:

Wow! Nice collection of KU player moments on the court. Hope it's a regular feature.

Alright Nick Gerik's back with the NBA blog! Hopefully the blog has a decent feature like this at least once a week. I love to see former KU stars making headlines and highlights in the league of extraordinary ballers.

That is just way too much fun. These are some fun, spectacular bits. Kills me that the twins are always playing together. Would YOU want to be stuck inbetween those two? Awesome to see TRob get a chance to show his court energy. Great feature, Nick.

Isn't that Paul Pierce that B-Mac is dunking over in that last clip!?! Jayhawk on Jayhawk violence all over the NBA!!!

Thanks, all. Benton Smith and I hope to have posts up several times a week, aiming for a MWF schedule. That's in addition to the stat roundups every night.

And great find, Eliott! It's out of control.