[Hmmm. What to write about for our 'Hawks in the NBA blog? What to write? Oh, a couple former Kansas basketball teammates played against each other Tuesday night. I guess it wouldn't hurt to check that out and lead with … HOLY MOTHER OF MONSTER JAMS!]

What on earth did Jeff Withey do to Xavier Henry when they both lived in Lawrence and played for KU to ignite his wrath?

Poor Withey. Let's read a transcript of the fake dialogue that happened on the play:

Withey: "Man, I thought we were friends. Doesn't he remember the good old days?" 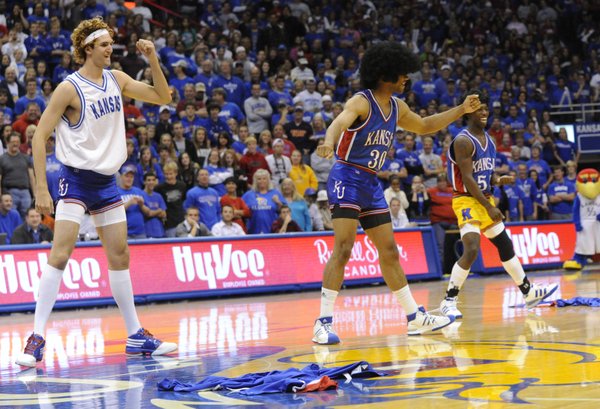 Jeff Withey, left, Xavier Henry, center, and Elijah Johnson dance during a freshman skit at the 2009 Late Night in the Phog. by rgwin

Henry: "Nah. But I remember that time I did this." 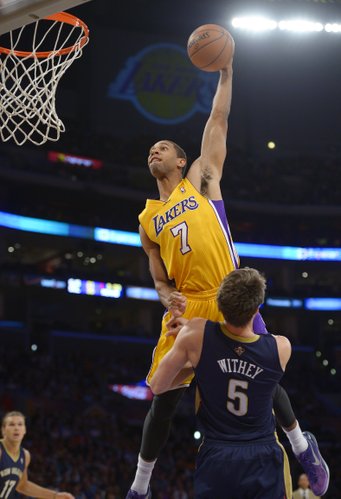 Actually, ESPN Los Angeles writer Dave McMenamin asked Henry about the play against his former KU cohort after the game:

Xavier Henry on The Dunk: "I knew it was Jeff (Withey) ... He decided to take a charge and that wasn't the right thing for him"


Oh, man. Henry even tweeted about the dunk that earned him the No. 1 spot on SportsCenter's Top 10:

Anyway, the dunk of the night and Henry's 15 points busted him out of a four-game slump and helped the Lakers whoop the Pelicans, 116-95.

Meanwhile, this was actually the best game of rookie Withey's young career: nine points, five rebounds, one block in 18 minutes. And he learned an important lesson: challenge the shot or hustle yourself out of the way before you get posterized.

Getting away from Jayhawk-on-Jayhawk crime, the Miami Heat's Mario Chalmers (15 points, seven assists in a 118-95 beatdown of the Bucks) spent most of the night confusing Milwaukee's Khris Middleton, a former Texas A&M standout, with highlight-worthy passes. Helps to have that LeBron guy finishing the plays, too.

After helping the two-time defending champion Heat win again, Chalmers, like many former Jayhawks in the NBA, watched KU knock off Duke at the Champions Classic.

Here's what some of the guys were tweeting about the 94-83 win.

I said it once and imma say it twice. It's a great day to b a Jayhawk. Enjoy ur night everyone. I'm out


Cole Aldrich took to Twitter to hit up KU recruit Tyus Jones, who will announce his college choice Friday.

Hey @Tyusjones06 now you know KU > Duke. You don't have to wait until Friday. #allwedoiswin


Markieff Morris liked what he saw.


But perhaps the best tweet came well before tipoff, when Chalmers trash-talked Heat teammate and Duke alum Shane Battier — and didn't even have the common decency to use the man's twitter handle. #smh

Today is a great day to b a Jayhawk. Them dukies goin down in chi town. Rock chalk jayhawk. Sorry @Shan eBattier it ain't happening

I'm with Mario. It's a great day to be a Jayhawk

i've been saying this all along- Jeff withey is the next shawn bradley..only purpose is to be dunked on.

Yahoo-lite newz like this is why I hate the NBA.

Xavier's response should have been "well he shouldn't of been standing there!"

That dunk looked great, but seriously, was that not a charge? Ridiculous!