Texas' only hope for upset might be at free throw line 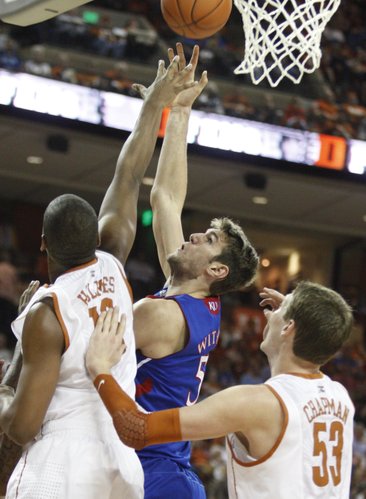 Kansas center Jeff Withey puts a shot over Texas defenders Jonathan Holmes (10) and Clint Chapman (53) during the second half on Saturday, Jan. 21, 2012 at the Frank Erwin Center. by Nick Krug

Team: Texas
Record: 8-8
KenPom (Ken Pomeroy) Ranking: 86
(All team statistics are from KenPom.com and only include numbers against Div. I competition.)

• Interior defense: Opponents have had problems scoring inside against Texas, shooting just 38.9 percent from two-point range this year (third nationally). Part of the reason for that is the Longhorns' shot-blockers, as UT rejects 14.2 percent of the opposition's two-point attempts (20th nationally). Opponents have made just 54 percent of their shots at the rim against Texas (NCAA average is 61 percent) and 28 percent of their two-point jumpshots (NCAA average is 35 percent). Because of this stinginess inside, the Longhorns lead the nation in defensive effective field goal percentage.

• Limiting opposition's three-pointers: The Longhorns do an above-average job of limiting three-point attempts, allowing them on 31.9 percent of opponents' field goals (132nd-highest split nationally). Also, only 22.4 percent of opponents' points against Texas are coming from three-point range, which is the 43rd-lowest split nationally. Texas also has been blessed with some good fortune, as other teams have made just 23.8 percent of their threes (first nationally). I'm a guy that believes defenses don't have a lot of control over that number, so playing Kansas will be an interesting one-game test study to see if UT can continue to keep opponents' three-point shooting down.

• Drawing fouls: Texas has posted the nation's 76th-best free throw rate, which measures how often a team gets to the free throw line. Playing at a just-above-average pace, UT has attempted 23 free throws per game and 26 freebies per game at home while getting 22.4 percent of its points from the line (76th-highest split nationally).

• Shooting: Texas is a poor shooting team everywhere you look. Two-pointers? The Longhorns make just 43.4 percent of those (298th nationally). With threes, UT has just 30.2-percent accuracy (283rd nationally). The Longhorns also have been awful shooting team at the free throw line, making 63.8 percent of their tries (304th nationally). Part of Texas' problem is that it takes a high number of two-point jump shots (not including layups/dunks/tip-ins), as according to Hoop-Math.com, 42 percent of its shots come from that location (NCAA average is 33 percent). The 'Horns haven't shot well from there either, making just 32 percent of those attempts (NCAA average is 35 percent).

• Turnovers: The Longhorns are extremely careless with the ball, turning it over on 23.2 percent of their possessions (294th nationally). Texas is averaging 16.3 turnovers per game while also not creating much havoc on the other end, forcing opponent giveaways on just 19.3 percent of possessions (230th nationally).

• Experience: Texas can claim to be the youngest team in America, as the team ranks 347th (out of 347 teams) in KenPom's "Experience" measure. Texas coach Rick Barnes' nine-man rotation consists of six freshmen and three sophomores. The Longhorns have only two upperclassmen on the entire roster: senior Dean Melchionni, who averages 2 minutes per game, and senior Andrew Dick, who has played just two minutes.

• Six-foot-4 guard Sheldon McClellan (No. 1) is the best of the bad options for Texas offensively. The sophomore takes 27.7 percent of his team's shots (205th nationally) while posting the team's best turnover rate. His best skill is getting to the free throw line, drawing 6.1 fouls per game (62nd nationally) while notching the nation's 168th-best free throw rate. He's strong at the stripe as well, making 79 of 98 shots (81 percent). McClellan doesn't do much else. He's a poor shooter from two-point range (40 percent) and three-point range (29 percent) while posting low assist, block and steal percentages.

• Six-foot-3 guard Julien Lewis (No. 14) is Texas' secondary option offensively. He takes one-fourth of his team's shots when he's in and is the Longhorns' best shooter from three-point range, making 24 of 61 (39 percent). He's also UT's best two-point jump shooter, making 40 percent of those shots between the rim and three-point line. Because he settles for so many of those jump shots, though, that drags down his overall efficiency. Like McClellan, Lewis doesn't turn it over as much as many of his teammates, but he also doesn't provide much defensively in the way of steals or blocks.

Your view of this game basically comes down to one question: Do you think Texas will be able to score enough to win?

The Jayhawks enter as one of the nation's top defensive teams, while Texas has been just brutal offensively. Not only that, the Longhorns have gotten a high percentage of the points they do get from two-pointers — an area that KU dominates because of center Jeff Withey.

That leaves a hot three-point shooting day and a great day at the free throw line as the best options. No. 1 isn't likely, just because Texas doesn't appear to have the shooters. The Longhorns have shot a league-worst 25 percent from three in Big 12 games, and that's only slightly under the team's 30-percent accuracy from beyond the arc this season.

Getting lots of free throws, though, isn't out of the question. KU hasn't been a foul-prone team this year, but crazy things happen on the road in the Big 12, especially if a home underdog can stay close early.

Pay close attention to Texas' free throws and offensive rebounding. If the Jayhawks can limit those two areas, they should be fine even if they have a tough day against Texas' defense.

So to answer my first question: No, I don't think Texas will be able to score enough to win.

KU coach Bill Self likes when his team can grind out victories on the road by making the other team play poorly, and this feels like one of those games.

KU received good production Monday against Baylor out of Elijah Johnson, and the point guard appears to have a favorable matchup against Texas. The Longhorns' two guards don't force many turnovers defensively, meaning the sometimes-careless Johnson should be able to limit his giveaways while serving as the primary ballhandler. Mark me down for double-digit points for him, as I think he'll find some openings behind the arc to lead the Jayhawks in three-point scoring.

After the game and seeing the huge difference that KU had at the line, quite surprising on the road though Texas seemed to deserve most of their calls due to their physical style particularly around the basket, your headline really caught my eye following the game. KU's Defense is excellent again this year. Texas found their touch behind the arc which really helped them hang in the game. Texas really stepped up to defy the numbers yet Kansas was still tough enough to take the win on the road.

Hawk to Rock for this game is really gonna hurt Jesse...