Linebacker Joe Dineen out for season 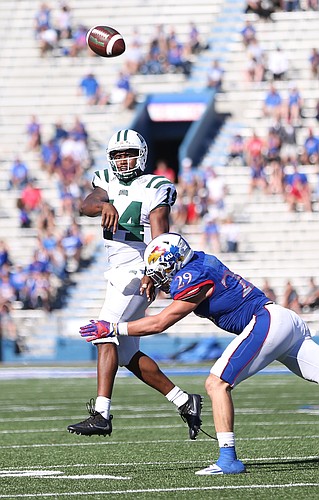 Kansas linebacker Joe Dineen, out with a hamstring injury, will miss the remainder of the season, head coach David Beaty announced at his weekly Tuesday press conference.

Dineen suffered the injury in the Memphis game the third week of the season, which means that he is eligible for a medical redshirt, which will keep the junior in the program through the 2018 season.

“He’s been working feverishly to get back," Beaty said. "He cannot stand his life without football right now.”

Each time Dineen thought he made progress, he suffered a setback.

Beaty said that freshman running back Khalil Herbert (toe injury) is questionable and added that center Joe Gibson, who missed the Oklahoma game with a recurring neck injury, "is progressing pretty good."

Defensive end Dorance Armstrong, who missed fall camp after on the first day going down with an injury that Beaty called, "a partially torn ACL." Beaty said that Armstrong tells him he does not feel anything wrong with the knee now and the coach said he does not anticipate him needing offseason surgery.

program-wise, may be better to have Dineen two years from now, rather than one more year only. Especially since Arnick is playing well.