Today's stop on the Most Crucial Jayhawks list takes us back to the secondary, where a cornerback-turned-safety who received some valuable experience as a true freshman comes in at No. 18.

After breaking into the starting lineup during his first season as a Jayhawk because of his raw ability, Miller spent the offseason fine-tuning his game, working on his body and reconnecting with the finer points at safety.

Now, with preseason camp a little more than a month away, he's staring at an opportunity to start again, this time at a more familiar position. 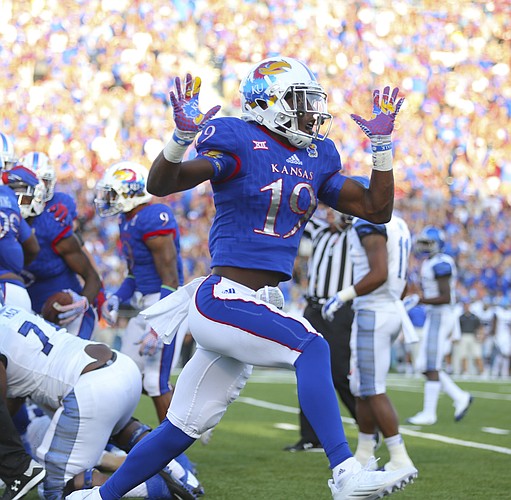 Kansas cornerback Tyrone Miller Jr. (19) celebrates a Jayhawk recovery of a Memphis fumble during the first quarter on Saturday, Sept. 12, 2015 at Memorial Stadium. by Nick Krug

Some football players just have a nose for the ball. They take direct paths to make tackles. They get their finger tips on passes for deflections. They poke at the football to jar it loose and at other times jump on the loose ball for fumble recoveries. They bring more value to a defense than their measurables might forecast.

Tyrone Miller, sophomore safety out of Ann Arbor, Mich., showed that knack from the first game of his college football career as a true freshman.

A natural safety who didn’t play cornerback until his senior season in high school, Miller was pressed into starting duty the first seven games of the 0-12 2015 season.

“I love free safety,” Miller said. “I was always comfortable there. That’s where I started off at. I like that I can see everything and I can make plays everywhere when I need to.”

Miller said he will be a better safety for having played cornerback last season.

“It helped with my hips and my footwork and my eyes,” he said. “I worked a lot on my eye discipline last year. Now that I worked on that, now it’s fine.”

Miller said he would like to play at 190 to 195 pounds this coming year.

Miller said he likes to hit and likes the “little dinging sound that it makes in my helmet when I hit somebody.”

Asked to name what players on the defense have improved the most, Miller said, “Everyone has. Not to be vague, but everyone has improved a lot. Myself, Dorance (Armstrong), D.J. (Williams), Daniel Wise and Shaq Richmond, he’s a free safety this year also."

Asked to name the best dancer on the team, wide receiver LaQuvionte Gonzalez did not hesitate and answered, “Tyrone Miller."