It's more pass rushing on the list of the 25 most crucial Jayhawks for the 2016 season today, because, in the Big 12 Conference, stopping the pass (or at least slowing it down), either in the secondary or at the point of release, is a critical part of slowing down some of the country's best and most explosive offenses.

Last week, at No. 21, we saw senior defensive end Anthony Olobia's name pop up on this list. And today it's the man Olobia is battling with for a starting job who is our featured Jayhawk.

Both are coming off of 2015 seasons in which they showed flashes of great ability and it'll likely come down to the one who's most consistent getting the starting nod and more reps. Both will play, however, and both need to have strong seasons to help this KU team climb out of the cellar. 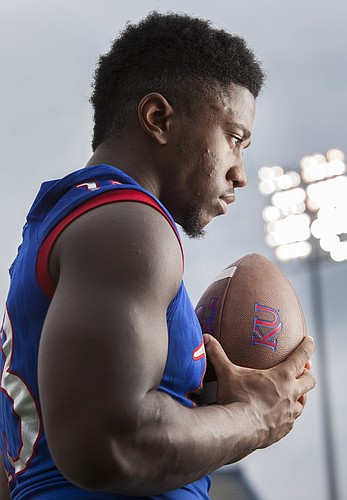 An explosive first step immediately caught the coaching staff’s eyes and Mosby used that step to get around KU’s offensive tackles and into the backfield regularly throughout the 2015 spring football season.

But when the Big 12 portion of the schedule arrived, Mosby faced bigger, quicker bodies in games than those who competed against in practice and at times, such as against the behemoths from Oklahoma and Texas, he looked overwhelmed by the sheer size of the blockers.

He played last season at 239 pounds and logged just 1.5 sacks in 10 games, including three starts. He didn’t meet expectations, so it was time to shift to Plan B.

Mosby put on 19 pounds in the offseason and is listed at 258 pounds. The challenge now becomes restoring the explosiveness he showed at a much lighter weight.

His best game during the 2015 season came late, when he totaled four solo tackles, including a sack, and two assists against TCU. He showed in that game, vs. strong competition, what he could do for the Kansas defense when he is able to turn his explosive first step into strong plays from start to finish.

Mosby and Anthony Olobia are in their third seasons at Kansas, where they both redshirted in their first seasons after two-year junior college careers.

Fellow defensive end Dorance Armstrong is as good an NFL prospect as Kansas has on its roster and the potential for big sophomore season from him has a better shot at becoming reality if Mosby and/or Olobia bring heat on the quarterback from the other edge.

If Mosby can become a disruptive enough force to make the opposing quarterback hurry, thus doing a huge favor to the secondary, KU has a shot to stay in more games into the fourth quarter.

Listened to some radio talk last year about mu's success at the DE position. Though they've had some really good ones, what was discovered was that even good defensive ends have trouble pressuring today's quick-throw/read-option offenses, which are designed, in part, to eliminate or reduce pressure on the QB.

While we need to get some early pressure on QB's, I think a key to our success is simply not giving the opposing QB "forever" to throw the ball. The best way to win in any sport is to make the opponent uncomfortable and, if we can at least get QB's on the run, it will help our defensive backs in coverage. Last year, too often, QB's had 7-8-9 seconds to find a guy.

Of course, early pressure helps, and sacks help a lot, but the key is consistent pressure and short windows. Perhaps the additional weight will help Damani close the windows.

The personnel on this year's squad should compare very favorably with last year's. This upgrade should continue for a few years and help establish us as a contender in the league eventually.