In case anyone needed any further proof of just how important the offensive line will be to the Kansas football program's chances on the field this fall, we're now encountering our second lineman in three tries during our summer series that highlights the most crucial Jayhawks for 2016.

Guard Jayson Rhodes came in at No. 25 on Monday. And today it's the only player guaranteed to touch the ball on every offensive snap. 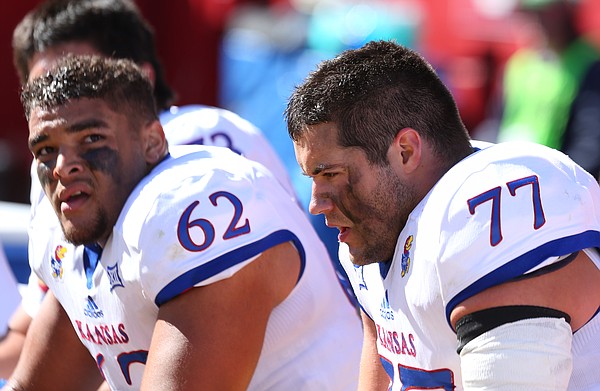 Kansas offensive linemen Joe Gibson (77) and D'Andre Banks (62) catch a breather on the bench during the second quarter on Saturday, Oct. 3, 2015 at Jack Trice Stadium in Ames, Iowa. by Nick Krug

Walk-ons must play a big part in Kansas digging out of the scholarship deficit partly responsible for an 0-12 season in 2015 and Las Vegas setting the over/under for 2016 victories at 1.5.

Walk-ons who earn scholarships after two years in the program, don't count against the maximum 25 scholarships per class, just against the 85 total. It's one thing to tell walk-ons that they have a legitimate shot at earning scholarships once they prove themselves in practice. It's a far more powerful thing to be able to point to an example of a walk-on who worked his way into a scholarship and then into a starting assignment.

Joe Gibson a fourth-year junior out of Rockhurst High, projects as the team's starting center, although he faces a strong battle from emerging red-shirt freshman Mesa Ribordy, a walk-on from Louisburg.

Gibson, 6-foot-3, 310 pounds, missed the second half of last season with an injury. In his three starts before that, he showed that he was more ready for competition than as a red-shirt freshman, when he played in eight games, started seven, and at times was dominated by more athletic, bigger, veteran Big 12 behemoths. For example, his play against Baylor from freshman to sophomore season noticeably was better.

Centers have responsibilities that extend beyond blocking and snapping. Gibson has the brain to handle those, having earned Academic All-Big 12 second-team honors.

Gibson and fifth-year senior Jordan Shelley-Smith, in a battle with Clyde McCauley for the starting spot at left tackle, share the team lead for career offensive-line starts with 10.

Convincing Gibson to come to Kansas as a walk-on wasn't a tough task, thanks to his lineage. His great uncle, Ray Evans, was an all-time KU great, starring in football and basketball. Evans is enshrined in the College Football Hall of Fame. Joe's uncle, Harry Gibson, was a basketball standout for the Jayhawks. Gibson's father, Paul, played football at Pittsburg State.

Idaho, Pennsylvania and Western Michigan recruited Gibson, but walking on at KU appealed to him more. A healthy 2016 season from him would do a lot to stabilize the O-line and build chemistry on it. In the event he suffers from injuries, Ribordy or projected starting guard Jacob Bragg could slide in to replace him.

I really like players like Gibson and Ribordy. They are hungry and fight for everything they get. No entitlement attitude at all. Kids wired like this are what will put us back into regular winning seasons.