Say something nice about Kansas football: Faster tempo showing up 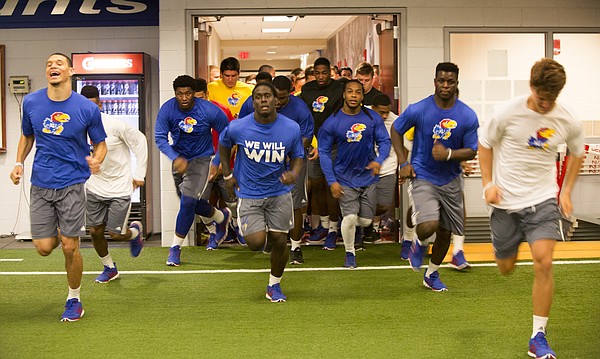 KU football recruits head into the weight room Friday morning at the Anderson Sports Complex as KU football practice starts early in the morning as the players go through a rigorous session for conditioning. by Richard Gwin

Kansas head football coach David Beaty's desire to increase his team's tempo seems to be taking root. Spring practices picked up the pace, and after I spent 45 minutes watching the Jayhawks work with weights Friday, the thing that stood out most was how swiftly it all happened with no standing around and waiting.

"You have to match what you're trying to do on the field," KU's strength and conditioning coach Je'Ney Jackson said. "You have to match the head coach's philosophy with the way you train. So now they don't know any other way but to do anything at a high rate. No one should ever be idle. Once you get done with one exercise, usually you're going to another exercise. So we're constantly moving, constantly moving."

Red-shirt sophomore defensive tackle Daniel Wise, the team's reigning Workout Warrior of the Week, makes sure all the new faces know there is only one speed during workouts and that speed is pedal to the metal.

“We have to change the momentum around on the team, pick up the pace,” Wise said. “Some new guys coming in may not know what to expect and you have to let them know from Day 1.”

As team speed increases through recruiting, the fast-pace at which Beaty wants to play will result in more big plays. For now, fast or slow, the players' job is to do everything as fast as they can.

The pace is picking up.

There, I said something nice about Kansas football. Your turn.

Excellent way to put it. Losing two offensive line commitments a tough blow, but that's going to happen until you show you're a winning program. Recruiting seems a little better, conditioning better, focus and 0-12, instead of making everyone hang-dog and think "what's the use" seems to have inspired everyone. It's going to take years, but slow progress is real progress.

Could also be showing that our recruiting staff has a decent eye for talent. A few will be stolen until that winning starts, but a few will fall through the cracks and those will be the guys that start the winning. Actually feels like we are doing this the right way this time.

Feels that way. Coaching staff will have to show a lot of discipline in order to avoid temptation of taking too many jucos when there are still so many holes to plug.

I think this team believes in one another and pushes for each other. They are brothers and they are forming a bond, working together. I think the up tempo is easier when the guys are pushing you to succeed. Our basketball team is like a family, each one with their role. The football team sounds like it is following that motto. I like the culture our coaching staff brings to pull it all together. Give them time and KU could be making bowl games and upsetting a team or two. One team, one dream 2016!

The fact that other teams are poaching KU recrruits is a good sign if you want to look at it that way. KU offers early kid accepts then other offers come in from other schools who notice exactly what KU did. KU has an eye for talent but until they start winning holding on to them will be tough. Some kids like Mayberry and Long last year who got a late rush from other programs and held their commitment and Dominic Williams seems to be this year, hopefully more kids with good D1talent will come as well. But today its all flash big successful programs tv exposure bowl games we aren't close to any of that so it limits alot of kids who want to come play for a rebuilding program.

That is where Evans could produce huge dividends once he arrives. He's seen the big program, and is coming here for the substance. Just the opportunity to play ball, which is also a lot like the guy from Wichita/CSU. Both just want a chance to touch the ball/turf.

Culture building takes a lot of time and I'm impressed with how consistent the staff if with implementing it. Great job, Jayhawks! See you in September.

It's hard to say nice things about the football team with these sexual assault stories (Sarah McClure, Daisy Tackett...) coming out about the team and how the coaching staff and university handled them. Assuming the allegations from the girls are true. It's a shame there are so many nutty girls, along with supporting fools (Nifong, Rolling Stone Mag...) that make sensational claims that prove to be completely false (Duke LaCross, Virginia Phi Psi, etc, etc) that necessitates a thorough investigation rather than quick and decisive actions.

I'd rather not have a football team if we are to have player that behave like that. I hope we don't recruit bad character kids. It's a shame to say don't give kids with a record a second chance but that kind of logic cost Baylor and other teams.

Learned an interesting fact when Coach Beatty spoke at the Chamber mixer last week. He said that last year he only had 5 guys that could run a 4.5 40 or faster. Now, he has 30 guys that can do it. Tempo is definitely picking up.

Along with strength and other measurables from a previous article. Speed and strength is the foundation.