From the deepest position on the defense to one with more question marks and less obvious depth at a position that relies more than any other on rotating players in and out of the game to keep them fresh. 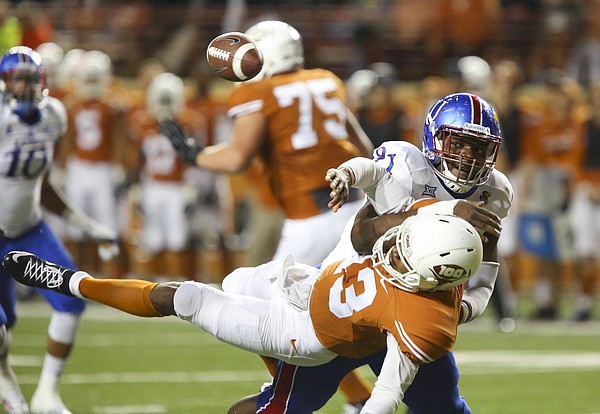 The Kansas coaching staff, then headed by Charlie Weis, understandably was excited to get a commitment from D.J. Williams out of the Lufkin, an industrial town in eastern Texas, located two hours northeast of Houston and three hours southwest of Dallas.

After all, Williams had a big frame, standing 6-foot-5 with broad shoulders and a thick body. Not only that, for what it’s worth, he was rated more favorably by recruiting services than most Kansas recruits. Rivals.com ranked him No. 38 in the nation among defensive tackles in the Class of 2014 and No. 78 among all recruits from the football-rich state of Texas. Plus, at various points during the recruiting process, Miami, Missouri and Oklahoma were wooing him.

Yet, once he arrived on campus and began the rigors of college football, from summer conditioning to fall camp to daily practices while wearing a redshirt, the buzz on Williams faded. At times, he looked a little overhelmed by the work load and breathed heavily quicker than some of his position mates during drills. At least outwardly, he didn’t exhibit a great deal of fire or drive. Some athletes need weekly games in order to break the monotony and rekindle the motor. Redshirts don’t have that luxury.

As the 2015 season progressed, so did Williams. He appeared in eight games last season, including the final seven. During a three-week stretch in the middle of the Big 12 season, he showed flashes of what made him a highly rated recruit. At Oklahoma Stte, he totaled a career-high three tackles and added two tackles the next week at home against national-title contender Okahoma. The following week, at Texas, he contributed the biggest play of his young career, a strip-sack.

Williams moves pretty well for a man who carries 300 pounds on his frame.

His potential will put him on the first team of the depth chart heading into fall camp, but he’ll need to bring consistent effort and energy in practice in order to stay there.

Sophomore Daniel Wise has one starting spot locked up and Williams will compete with juniors Jacky Dezir, in his second year at Kansas after a year of junior college, DeeIsaac Davis and Isi Holani, a pair of juco transfers.

Should Williams emerge as the most improved player on the defense, that would settle any uneasy feelings about depth at defensive tackle. He has the tools. It’s just a matter of whether he can put them all together in this, his third season in the program.

5 more rivalries that need to be renewed

Was Daniel Wise really so dominant that he should have a starting spot locked up? I certainly hope that Williams, Jacky Dezir, and JC transfers DeeIsaac Davis and Isi Holani push the heck out of him. It all starts up front, and we need more on both sides of the ball.

Lufkin is not southwest of Dallas. Try southeast.