First off, here's hoping everyone had a happy and safe Fourth of July celebration.

The long, holiday weekend delayed the list of this year's most crucial Jayhawks by a day, but we're back at it today with a name that most of you are probably quite familiar with — at least in terms of reading about and hearing about.

It's a new-look offense — yet again — for the Jayhawks this fall and the junior from nearby Basehor has a chance to be one of the biggest beneficiaries.

Time will tell exactly what that means, but here's an early glance at how important it could be for this year's team. 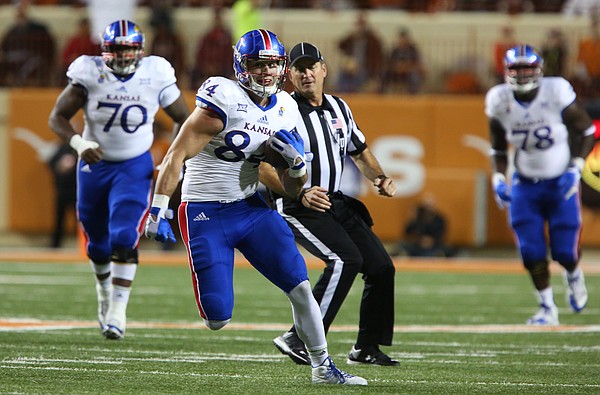 Kansas tight end Ben Johnson (84) breaks up the field after a catch during the first quarter on Saturday, Nov. 7, 2015 at Darrell K. Royal Stadium in Austin, Texas. by Nick Krug

Kansas tight end Ben Johnson doesn’t have Ben Johnson speed, but he has more of it than his receiving statistics might lead many to believe.

Kansas doesn’t need its Ben Johnson to keep pace with the original Ben Johnson, the Jamaican-born sprinter who won a pair of bronze medals in the 1984 Olympic Games and lost an assortment of other medals in later years because his world-record performances were aided by steroids. The Jayhawks just need Johnson to stay on his steady improvement curve without being knocked off it by injury, as has been the case at times during his Kansas career.

A 6-foot-5, 245-pound fourth-year junior from Basehor, Johnson doesn’t necessarily have any one thing that he does amazingly well. He’s just solid across the board. He’s a big target with sure hands, runs well for his size, is a decent blocker and has the agility to make catches on so-so throws.

Johnson backed up Jimmay Mundine two seasons ago and made nine starts last season. Kansas doesn’t always use a tight end and when Johnson was on the field his primary responsibility much of the time was blocking.

He caught 13 passes for 115 yards last season, an average of 8.8 yards per reception. His 30-yard reception at TCU was the biggest gain of his career.

A versatile athlete in high school, Johnson played defensive end and tight end for the football team, starred for his state-championship basketball team in 2012, finished third in the state in the discus throw.

A healthy season from Johnson is important because KU lacks depth at the position. The coaching staff is high on the potential of red-shirt freshman Jace Sternberger, a 6-foot-4, 236-pound native of Kingfisher, Okla., but Sternberger hasn’t played in a college game and ideally could use another year of body building before taking on a major role.

Johnson and Steinberger are the only scholarship tight ends in the program.

We need to double the number of catches for Johnson this year, at the very least. Punishing tight-end YAC's help to soften the aggressiveness of db's. We need some solid middle-of-the-field catch and runs to keep the lab's home and to get first downs.