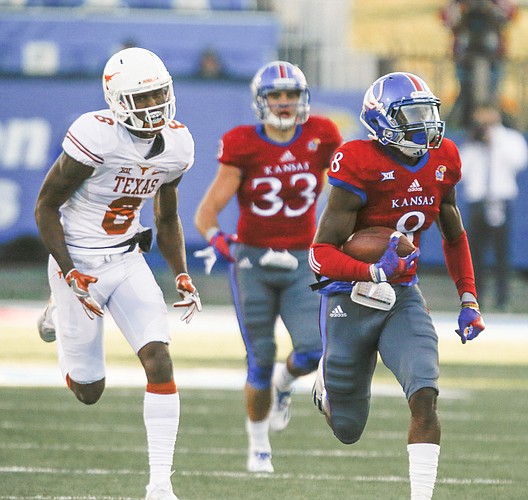 Kansas corner back Brandon Stewart runs back an interception for a touchdown during the second quarter on Saturday, Nov. 19, 2016 at Memorial Stadium. by Nick Krug

The most obvious improvement Kansas made in 2016 from winless 2015 came courtesy of its pass defense.

The maturation of sophomore defensive end Dorance Armstrong and senior cornerback Brandon Stewart played big parts in solidifying the pass defense. Stewart's pick six in the upset of Texas gave him a signature play for a career that followed the path of many talented junior-college cornerbacks in that he struggled making the adjustment to the big-time as a junior and came on strong as a senior.

Obviously, I'm not allowed in the defensive meetings, but I have a hunch the veteran presence of linebacker coach Todd Bradford, a former defensive coordinator, also played a big role in KU shoring up its pass defense. I base that on how genuinely impressed defensive coordinator Clint Bowen has been with Bradford's knowledge and experience from Day 1. Keeping Bradford on the staff is a must for Kansas carrying the momentum of an encouraging finish into next season.

The continuity of having Bowen in place through the turmoil of Weiss and the befuddling actions of Beaty has shown-through as a solid bright spot. Remember, Campo was brought in by Weiss to be the D.C., and he essentially relinquished those duties to Bowen, understanding that there was a coach already on board who knew what he was doing.

Of course, it takes good-to-great players to compete and, as Tom points out, we had some this year. Now, we need to get more.

The Big 12 is more open now than in the past few years. Who knows what will happen in Waco? TCU has clearly taken a step back, TTU is the same 'ole TTU, and Snyder can't have that many more seasons left in him. ISU is on the rise, and we need to be too.

We have a chance over the next 2-3 years to move up. We need stability on the coaching staff, we need an O.C. and we need to out-recruit our position in the standings. Those are the off-season challenges awaiting Beaty.

The defense backs as a whole were the strength of this team. Many of the sacks (2.33/game) were coverage sacks and not the result of outright beating the offensive lineman. All season long the opposing quarterbacks had too much time to find second, third, and even fourth receiver options. KU needs to continue to get bigger, stronger, and faster up front and somehow replace the seniors on the most productive part of the defense.

Between Spring and Fall camps, KU should be able to determine a starting QB and with most of our offensive line coming back, we should get off to a quick start during pre-conference games. The HC should not be the OC. Bring in a new OC or let Coach L finish out his contract since he makes more than the HC. If we can replace all of our departing DBs, our defense should be as good or better than this season. Our return game (punts and kickoffs) needs lots of help.

Actually, Beaty makes $800,000 per year and Likens $1.05 for three years, which works out to $350,000 a year. Lee back at one safety. Mayberry likely starter at nickel. Lot of work left to do on recruiting trail to shore up defensive backfield.