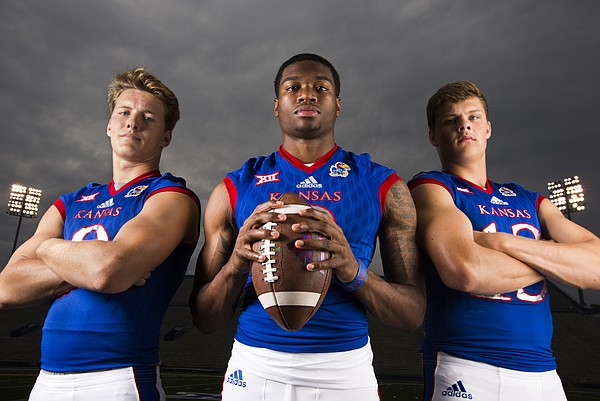 I won’t pretend that I can say something nice about the Kansas football depth chart having three names listed as possible first-stringers with the season-opener days away. Best-case scenario would have had one of the three quarterbacks blowing away the competition by now.

Instead, I’ll reach into the issue and find something nice to say.

The size of the crowd for Saturday’s Rhode Island game has the potential to turn faces red, so I’ll use this week’s blog to examine whether head coach David Beaty’s attempt to keep his starting quarterback a secret until the 6 p.m. kickoff will increase the size of the crowd or decrease it.

Since URI, 1-10 in the Football Championship Subdivision last season, doesn’t have the talent to create scoreboard suspense, uncertainty regarding the starting QB, provided it doesn’t leak before game night, adds a little intrigue, creates a potentially powerful moment.

If Beaty really can pull it off and keep the secret, fans will explode in support of whichever quarterback sprints off the sideline. Cool moment, one that might motivate someone on the fence to buy a ticket and head to Memorial Stadium. So in that sense, it should increase attendance.

The potential for it backfiring at the gate exists. Here’s how: Fans wanting to believe the team will improve significantly from last season’s 0-12 finish might fear that Beaty keeping the secret in order to give his team an edge means the Jayhawks are weak enough to need an edge to defeat a team that went 1-10 in a lower division. Most thinking that way will get off the fence and makes plans for a Saturday night out on the town or in the den watching multiple games.

My guess is fans curious to experience suspense at Memorial Stadium, not that common a feeling in recent years, will outnumber those bummed that the coach thinks his team needs the edge against the Rams.

Humans tend toward optimism, particularly in regards to a team that has not yet lost a game.

Will it be Ryan Willis, Montell Cozart or Carter Stanley to take the first snap of the 2016 season? My guess is it will be Willis, but it’s only a guess. The only way to know for sure is to show up before Saturday’s 6 p.m. kickoff.

I don't know about this idea. Beaty not naming a starting QB in order to help the gate? Out in western Kansas we call that "the tail wagging the dog." I am hoping it has to do with fairness to all three when one hasn't separated himself from the other two. Maybe he wants to see all three play in a probable win, observing how they react when the bullets start flying for real this Saturday. Then, he makes a choice of starter for the following week when the competition gets quite a bit stiffer. To increase the gate? Sounds like a stretch to me.

Although we need to remember, apparently Cozart is a star QB in training camp the past 2 years.

Hopefully Beaty won't be wooed by his camp performance, because we all know it doesn't translate Into the actual season.

I agree. Cozart seems to fold under the pressure. If coach does start him, lets hope it's on a short leash.

There really isn't any proof that Willis or anyone else hasn't separated from the others except for those inside the meeting room with Coach. There's nothing that says Coach needs to tell us what is happening inside the program if it isn't beneficial to the team - though we obviously deserve to know.

The fact that Coach has not named a starter only reflects his earlier comments that he would not name a starter because it would give us an advantage. Even the fact that it would give us an advantage doesn't mean that Coach thinks we need an advantage as much as it is the smart coaching move. Sort of like the comments during a game - Doesn't matter whether the game is close or a blow-out for or against. Coach is still going to teach and expect the players to play right. Coach is going to coach to give his team the best chance of winning.

I'm guessing that at least 2 will play tomorrow almost regardless - unless the D completely folds and it turns into a gunslinger's shootout with our starter as hot as their's. Ya, not likely at all.

I'm really hoping that the starter, first reserve, and D all play so well that whoever ends up third gets to play at least the 4th quarter.

After listening to the Q&A, I stand corrected on the QB separation issue, though he also said that URI was a really good football team, and that the QB's have performed at a high level. Coach is definitely positive, but not sure that accuracy (by the rest of the world's standards) is one of his strengths.

I wouldn't be surprised if both Willis and Cozart played a significant number of snaps on Saturday. Hopefully atleast one of them will get a hot hand.

If neither is dominant, then Stanley could get a shot in the 2nd half.

First game of the season. And the most likely winnable game of the upcoming season. Continual talk about this team being improved. That's what will draw the fans for this first game.

Me? I'm 1500 miles away. But this game is on espn3 and I'll hdmi my laptop to the TV to watch this game. I'll do the same for every game I can get on either TV or espn3..

How many season tickets have been sold? I suspect it's the lowest number in decades.

I think it's more of a possibility that all three QB's suck than they're all doing great and Beaty doesn't know which one to choose. But, having said that, it does create suspense. Regardless me and 7 of my friends have season tickets so we'll be there. I just hope whoever it is plays like they #earnedit.