One voter's Hall of Fame ballot

Hall of Fame pitcher Walter “The Big Train” Johnson was born in Humboldt, roughly 90 miles south of Lawrence and that’s about as close as the Kansas University baseball program has come to Cooperstown.

One day, a KU baseball player will get drafted, work his way swiftly through the minor leagues, develop into a perennial All-Star and thousands of Kansans will sit on the lawn in Cooperstown and take in his induction ceremony.

That day could be a long way off, so for now we’ll look at the candidates to gain induction today at 1 p.m. Below is my ballot, No. 608. But first consider how I weigh steroids.

It strikes me as silly to ignore that Barry Bonds was a Hall of Fame ballplayer before his muscles swelled to the size of his ego. He had Hall of Fame written all over him before he started to break rules that weren’t enforced when he was breaking him. The rules were in the books starting in 1991, but testing didn’t take root until 2003. Bonds gets my vote every year.

It strikes me as equally silly to ignore that Sammy Sosa didn’t perform like a Hall of Famer before and after he looked like a body builder. When he looked like a baseball player he was a good one, but not a great one. Sosa never will get my vote.

How do I know who cheated? I don’t, in most cases, so I guess, based on off-the-record conversations I had with players, managers, coaches, front-office officials whose opinions I trusted. A Hall of Fame election is a court of public opinion, not a court of law, so “proof” of ballplayers using performance enhancing drugs is not the issue.
I vote with my conscience at the moment I’m voting, same as any election in which I participate.
I voted for the maxium 10 this year. Five players — Bonds, Randy Johnson, Roger Clemens, Pedro Martinez and Mike Piazza — required no thought. John Smoltz, Mike Mussina, Mark McGwire, Don Mattingly and Craig Biggio, in that order, rounded out my ballot, which didn’t quite have room for Tim Raines.

My guess as to which players will gain the required 75 percent of the votes to gain induction, from highest to lowest: Big Unit, Pedro, Smoltz and Biggio. Piazza inches closer but falls just short. 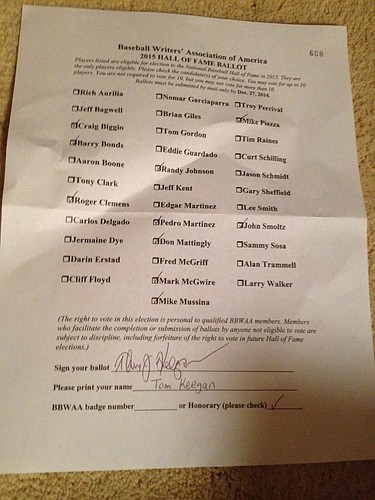 Your logic in terms of the steriod guys is sound, to me, and strikes a good compromise between the two extremes; I think that's where I'd land too. Solid ballot as well, though I think I'd substitute Raines for Biggio.

Biggio was a good solid player but not a HOFer.

Double Chin, I don't agree with you very often but I do agree that Bonds should be in the Hall of Fame. If he isn't allowed in then we should start doing research on all the inductees and start kicking out all that might have used performance enhancing drugs. By the way, Pete Rose should be in the hall as well based on his playing career or you should kick Mickey Mantle and Willie Mays out as well for being linked to gambling.

While I agree that Rose should be in the Hall based on his playing career, Pete's gambling on games he was involved in as coach and Mickey/Willie's serving as paid ambassadors for casinos, are completely different situations. As employees, Mickey and Willie were banned from gambling in any Atlantic City casino, plus there was no sportsbook in Atlantic City at the time.

Very good. Glad you wrote on this topic.

I'm also interested in, if you were asked to add 1 or 2 players to the ballot who you feel are worthy to be eligible for induction who would you choose (not that you would necessarily vote for them, but just that they deserve to be on the ballot)?