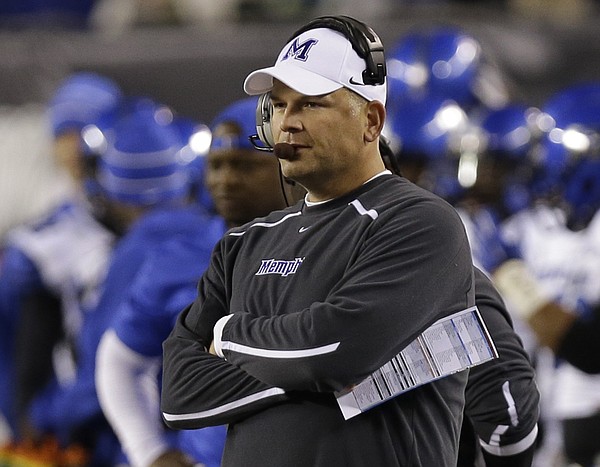 In this Oct. 4, 2014, file photo, Memphis coach Justin Fuente watches from the sideline in the first half of an NCAA college football game against Cincinnati in Cincinnati. Fuente said he saw plenty of potential in Memphis when he was hired to take over the program in December 2011. Now, his faith is being rewarded as Memphis could clinch at least a share of the American Athletic Conference title with a victory Saturday against Connecticut. (AP Photo/Al Behrman, File)

If Sheahon Zenger decides that Clint Bowen is not the best man to reverse the fortunes of a football program in the midst of its worst five-year record and saddled by a 2015 roster woefully thin in quantity and quality, look for the following in the background of the coach to whom Zenger turns:

1 - A leader with a background working on offense.

2 - A coach who knows the Big 12’s most fertile recruiting areas of Texas and Oklahoma and would have concrete ideas on how to assemble a staff that has well-placed contacts.

3 - A man with experience leading a turn-around program.

4 - Inside knowledge of what works and what doesn’t in the KU football program.

Third-year Memphis coach Justin Fuente never worked for the KU football program, but he meets all the other criteria.

Fuente, 38, inherited a program that had a 5-31 record in the previous three seasons and, according to the Associated Press, had 51 scholarship players upon his arrival, a figure similar to what KU will have this spring.

Typically, it takes at least three years to show positive signs when starting in such a deep hole. The Tigers (8-3 overall, 6-1 in the American Athletic Conference) are riding a five-game winning streak. Unless upset by UConn on Saturday, the Tigers will win the conference and have their first-game winning streak since 1969. Fuente went 4-8 and 3-9 in his first two seasons at Memphis.

A native of Tulsa, Fuente played quarterback at Union High and then at Oklahoma. He won the job and lost it a couple of times with the Sooners and then transferred to Murray State, where he excelled.

Fuente was hired by Illinois State as quarterbacks coach in 2001. By the time Zenger was hired as ISU’s AD, Fuente was the offensive coordinator. He left there for TCU.

This candidate sounds like a candidate with a possibly strong connection. And, he's young (a well).

He certainly has turned Memphis around (in his short tenure).

So, if he wants a Big XII gig. Then, the Jayhawk's perhaps offer the opportunity that he's looking for.

I really like Fuente. He should make the shortlist.

Bo Pelini after Nebraska fires him

What are you smoking? You think he'd get that kind of talent here. He's not doing that well considering the talent and resources he has.

first off, i dont know the name of what im smoking, but its fire.. second, He's churning out 9 wins, if he brings Charlton Warren with him, he is a great recruiter. They have several 4 star recruits coming in..

This guy sounds intriguing. Maybe make another suitor have a buyout of a ten-year contract, highly leveraged incentives, modest base pay so he's not getting easy money.