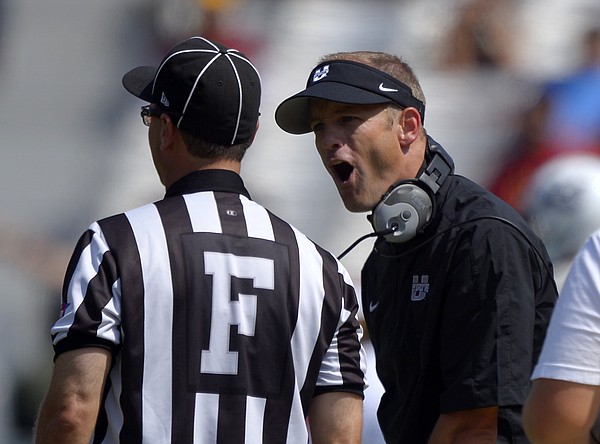 He doesn’t have the Kansas ties that Clint Bowen, Ed Warinner and David Beaty bring to the job interview, but Utah State head coach Matt Wells does have similar passion, a trait the past two KU football bosses lacked, and he has experience as a head coach.

A native of Sallisaw, Oklahoma, Wells, 41, played quarterback for Utah State, from which he graduated in 1996. After Navy, he spent five seasons at Tulsa (2002-2006), where his duties included recruiting coordinator. Two seasons at New Mexico, a year at Louisville, back to New Mexico for one season and then off to his alma mater to coach for Gary Andersen. During his time as Andersen’s OC, Utah State amassed impressive passing numbers.

Does the geography make sense? The off-the-cuff answer would be no. A deeper probe suggests Wells did a nice job of either maintaining or rekindling the Texas recruiting ties he established during his time at Tulsa. Nine players on the Aggies roster are from Texas.

Consider for comparison purposes that Chad Morris, the highest-paid assistant coach in the nation who came to college football after 16 years as an extremely successful high school football coach in Texas. He works for Clemson, which does not have a single player from the Lone Star state on the roster. Morris and Ohio State offensive coordinator Tom Herman are considered the leading candidates at SMU, but Herman might be in play at Florida as well.

Wells has gained a reputation as an outstanding recruiter and has handled the transition from assistant coach to head coach well.

His past does not look bad and a 18-8 record is not terrible but he did take over a program that was already up and coming from the past coach. A good thing is that he has maintained it pretty well. I also like that he has been an OC, QB, WR, and TE coach. The only thing that worries me is that he has never really been at a BIG program. I watched the video and I love his enthusiasm and how he was mic'ed up.

I don't know what the chances are that he would come to KU, but on paper, he looks like a realistic hire. His salary is low, so KU could probably hire him for $1.5-2M. His resume is good. If he is considering leaving, he may have better options than KU

Who meets that critera? I will assume that no current Big 5 conference coach would go to KU. Skimming over the other five FBS conferences, it would appear there have been turnarounds at Western Michigan, Colorado State and Rice. Programs like Utah State and Marshall have been strong programs. I don't know a lot about the Sunbelt schools.

I agree that someone who came from Ohio State or Alabama, who is used to having superior talent would not necessarily do well at KU.

Ironically, the model for what we are looking for has been executed well effectively by our two main rivals. Wouldn't we all be happy if we had a program on par with either K-State or Missouri?

OU and NU have always been good but OSU is another good example of a mediocre program turning around. It really started with Les Miles. My point about MU and KSU is that they were bad programs that are now achieving sustained success.

Bowen is a nice kid who really loves Lawrence and KU. That said, does he excell in any part of the game? I don't think that he does. His record of achievement seems weak.

Zenger really needs to think this out. Another mistake and the University of Kansas may not be in a power conference once the GOR expires. And that time is coming right quick.

I agree with you 100%. We need to get this hire right and it worries me that they will make the emotional choice with Bowen. Yes Mangino did take us to a 12-1 season but he was only 2 games over .500 as the coach. Who knows what would have happened if he didn't lose the players and lose the last 7 games of his last season. I just really think this needs the most thorough search to make sure we get the right now... I will glad admit that I was wrong if CB is hired and does great things but I have a bad feeling about that situation right now.

With no ties to the Jayhawks, I think he would be looking for something bigger and better just as soon as he got the Jayhawks on their feet. Passion for football and passion for KU are two different things. We need someone with at least a tenuous connection to have any hope of keeping someone beyond a five year contract.

I think the big question everyone has about Clint is whether he is Fam all over again. The similarities of being an alumnus and the love he has for the school is where it ends is my opinion.

Clint has shown the ability to recognize both the needs of the team and how to apply the solutions. Better organized practices that teach fundamentals, changing the OC duties. Just since taking over he has made some subtle changes in the recruiting model.

He has a plan and when Zenger hears it he might just be swayed by the fact our own guy has as good a plan as any of the other interviewees.

I vote Bo Pelini after Nebraska fires him

No. Bo Pelini never really managed to succeed in the big 12 north

Bowen doesn't realize how weak he may be as a DC.

We need a teacher of tackling; few and far between.

We need a DC that recognizes the deficiency of Zone passing defense. Few and far between.

We need a DC who can count the number eligible to catch/carry the ball. Damn few and far between.

And we need a DC that can create a logical Defensive Scheme starting with "The Notre Dame Defense", originally man to man which NO ONE understands unless you are a very old man!

It takes someone a h+++ of a lot smarter than Zenger to come up with those and other coaching needs! Sp Tms. QB. etc/

Not thus guy. He's moved around too much. Next!

Sources today say SMU and Chad Morris have agreed in principal for Morris to become the next HC for the Mustangs. He was waiting to see if Dabo Sweeney was going to be on the short list for the Florida job...and keep himself considered for the Clemson HC position should it come available. However, Sweeney is apparently staying and Chad Morris is moving on to a reported $3M a year salary.

Meanwhile, Kansas has a short list of a interim coach who has moral victories and players playing apparently like they're on a scholarship. The last 5-6 years of fumbles in having an AD and search committee that have a single clue that Kansas is in a Power 5 Conference, continues to be a punch line nationally, and lean on the most antiquated excuse of being a "basketball school." Kansas has simply squandered the luxury of trying an unproven interim HC at this point. The objectives must be 1. experience at a Top 20 program either as HC or Asst. 2. an established pipeline into Texas High Schools for recruiting.