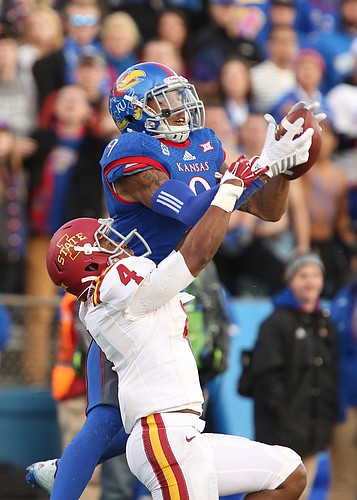 Kansas receiver Nigel King gets high over Iowa State defensive back Sam Richardson for a deep catch during the third quarter on Saturday, Nov. 8, 2014. by Nick Krug

Receivers Nick Harwell (Miami of Ohio) and Nigel King (Maryland) have had a chance to show their talent since Michael Cummings took over at quarterback, halfway into Clint Bowen’s first game as interim head coach, at West Virginia.

Sophomore Montell Cozart played the first four games and half the fifth game, so he and Cummings both have started four-and-a-half halves.

A look the quarterbacks’ numbers:

Since Cummings took over at quarterback, Mundine (281), Harwell (280) and King (276) are within a five-yard span in reception yardage totals, an indication of how well Cummings has spread the wealth.

Before Harwell and King came to KU, the Jayhawks didn’t get much production out of transfers Dayne Crist and Anthony McDonald of Notre Dame, Jake Heaps of Brigham Young and Josh Williams of Nebraska. UCLA transfer T.J. Millweard remains third on the quarterback depth chart.

A pair of players who took advantage of the rule that enables graduated players to transfer without sitting out a year have done well after leaving Kansas. Defensive back Tyler Patmon played well for the Oklahoma State Cowboys and recently had a pick-six for the Dallas Cowboys.

Andrew Turzilli, who clocked the second-fastest 40 time on the team, ranking behind only Tony Pierson last spring, has used his speed to make big plays for Rutgers. He has just eight catches for the Scarlet Knights, but three of them have gone for touchdowns and he’s averaging an eye-popping 38.1 yards per catch. Four of his receptions have gone for 36 yards or more and he had a 93-yard TD catch vs. Tulane and an 80-yard catch against Michigan.

Turzilli’s a big target and deep threat, but the way Harwell and King are playing for KU, he would have had difficulty finding playing time.

I am not a pro scout, but Nigel King! He has size, he's fast, and he can catch the ball. I honestly believe that if King played for us while Reesing were here, that duo would have broken records at Kansas (season records, most likely...if one assumes Nigel King would still have been a two-year player). This guy "King" is for real...

Todd was already throwing to Kerry and Briscoe. Do you think it would have been a huge upgrade? Not meaning to be dismissive of anyone - I love what we're getting out of the passing game these days, but joy of this group seems as much to do with contrast to the wasteland of the last few years as much as it is their pure talent now. Looking forward to these last games, and continued improvement. Long live the King!

Forecast for Saturday, 3 to 6 inches of snow. Does that help or hurt KU?

Better remind the equipment manager and coaches about the snow. The team could have benefited from cleats at last year's Iowa State game. We better keep them warm, too. The macho "short-sleeve" warm-ups do not impress, only look foolish and sap energy.

I think it is important to point out that virtually every Cozart pass was short. He only had a 50% completion percentage because they were almost all screen passes or for less than 5 yards. If you remove the short passes from Cozart's stats, he is much, much worse.

I am completely mystified as to how Weis, the so-called QB guru, could not have seen that Cummings was better than Cozart. How on earth could he have been so wrong???

Credit Bill Belichick for making a LOT of people look good. That's my thought to your statement.

"I am completely mystified as to how Weis, the so-called QB guru, could not have seen that Cummings was better than Cozart. How on earth could he have been so wrong???"

I am mystified that people make this statement or think it. Weis was brought in for a pro-style offense. Pressure was put on (by KU) for a spread offense. The switch to a spread (offense) brought Reagan. Reagan made the call for Cozart.

If you check 'the history books', Weis said Cummings is a drop-back QB, who can run, with a canon for an arm. The only things missing are size and experience. Weis' MO is to take guys like Cummings and red-shirt them; having them train for 2 years minimum before throwing them to the wolves.

Are/Were your college teachers/instructors responsible for the bad grades you and others received in their classes?

Let's play it your way for a moment. Then Bowen is responsible for OSU returning a kick-off for a TD late in the game, since it was his call. Charlie Weis would not have made that mistake. ;-)

On what planet would Cozart be a good QB? He makes bad reads is slow with his decisions doesn't have an accurate arm he sulks when things don't go well and isn't a leader in my opinion. I haven't seen him once since he's been replaced at QB smile or be interested in the game he just sits on the sideline expressionless. My guess is he transfers if Bowen is retained as hc. Use cozart like they did meierput him on the field as an athelete.

Ok Brett you're the expert name another team in the Big 12 Cozart would start for or be the No. 2 QB except for maybe Iowa St. Of course at a program like KU he is one of the best of a bad bunch. Although I'm pleasantly surprised by Cummings. Cummings has made the most of his opportunities look at the stats in this article between him and Cozart I'm sorry you can't handle the truth when Cozart plays the team is not as effective. Bowen nor KU has the time to walk Cozart through his mistakes don't get mad at me for my opinion obviously Bowen agrees with my opinion. Cozart had all spring and fall to get ready and has not shown he has the tools as of yet and quite frankly when he played he was awful for a numer of reasons but Cummings came right in and made a marked improvement at the position. How many losses with Cozart running things would be enough? Its not me that knows nothing about athletics, even his own coach Bowen saw enough to see he wasn't getting it done. Bowen has made many changes this year with players many on the O Line and with the coaching he can see where changes are necessary. Since your the athletic expert let me know why he should be given another shot unless there is an injury to Cummings. Like I said if he can't cut it at QB let him play another position he is athletic enough to be a WR or possibly DB. Cummingss numbers are better against tougher teams not SEMS or CM. Id gladly go to Mizz to get away from you.