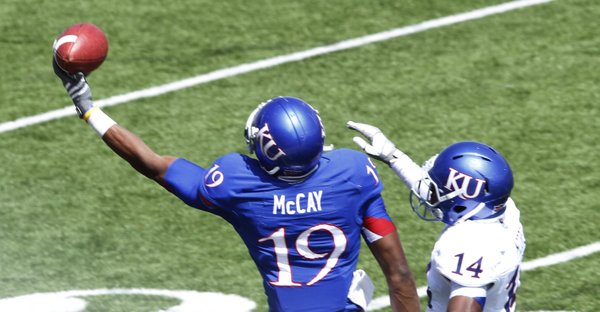 Some guys look the part, but just aren’t football players. McCay’s long, muscular body and V-cut build give him a strong appearance. Yet, he started seven games and caught just nine passes for 84 yards and one touchdown.

It appeared time to accept the reality that McCay never was going to get it done at receiver and just appreciate his contributions as an aggressive special-teams player. Then McCay, the star of the 2013 spring football game, performed well on a daily basis in spring practices at receiver. It’s now-or-never time for the senior form Bishop Miege High and the now won’t last but a few games.

McCay was tried at both linebacker and receiver at Oklahoma and didn’t show enough promise at either sport for Sooners coach Bob Stoops to attempt to reverse his decision to transfer.

Still, hope remains that McCay can find a way to blend sure hands with a physical style to fulfill his potential. John Reagan’s offense, which features far more short passes than did Weis’, should suit McCay well.

Wow. Not much of an assessment. Didn't really tell us much about him. I guess that #21 on the list isn't expected to contribute much so the article demonstrates that with it's length.

History would indicate that the odd numbers will inevitably have less analysis.

I'm really hoping that the change in position coach, and resultant correction of technique will result in much better catch rates / fewer drops for all the receivers. Because of the impact on 3rd down conversion and staying on the field, this could have one of the biggest impacts on the success of the team.

As for contribution, with 11 on each side of the ball, plus K & P, we're basically looking the starters, though we've already had some (likely) reserves. It will be interesting to see which starters are left off the list.

I am not hopeful for Justin McCay. At all.

I hope he makes me eat my words.

That would be a nice surprise. He's done nothing to prove any of us wrong so I'm not holding my breath either.

No mention that Kiesau is his new WR coach which will be of great benefit? McCay played real well at the 2014 spring game as well. Looked like the 2nd best receiver after Harwell