The latest installment in our series that examines the Jayhawks who stand to have the biggest impact for KU football this fall: 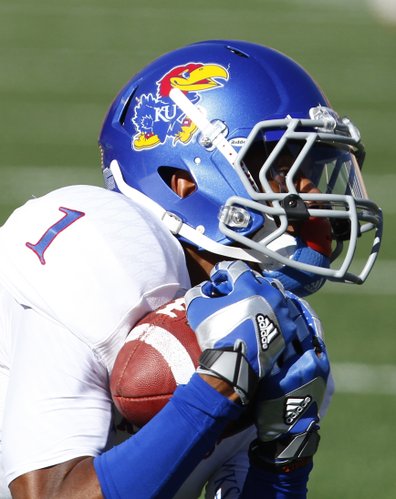 Kansas receiver Rod Coleman pulls in a catch as he falls to the ground against Texas during the second quarter on Saturday, Nov. 2, 2013 at Darrell K. Royal Stadium in Austin, Texas. by Nick Krug

Long, fast, graceful. Coleman wouldn't look out of place running pass patterns on any football field at any level. He really stands out. His name surfaced in discussions with players and coaches as much as any other during spring workouts. Many singled him out as the player who appears on the verge of a breakout season.

A junior who joined Kansas last season after playing one year at a junior college, Coleman started three games as a sophomore. He made his eight catches count, averaging 26 yards per catch, his longest reception a 45-yard touchdown.

If Coleman can stay healthy, he has the talent to make opponents pay for devoting too much attention to senior Nick Harwell, easily the most proven football player on KU's offense.

Coleman quickly caught the attention of new wide receivers coach Eric Kiesau and the coach gained instant credibility with instruction that quickly made him better at both ends of the pass play. Coleman said Kiesau taught him new moves at the line of scrimmage to gain the advantage on the defender and drilled him on hand placement on catches. Coleman was not immune to bouts of the drops, which infected the entire position unit a year ago. His hands were more sure during the spring, making him a decent guess as to which player will rank second to Harwell in receiving yardage in 2014.

Coleman needs to build on his strong spring and continue his improvement throughout the summer because a repeat of his first season with Kansas won't suffice. The team needs significantly more out of him and he has the talent to produce it.

Altthough I hope things improve i still have my doubts about anyone catching the ball with consistency until they do it on the field. Harwell has dont it but NOT at Kansas. We need a lot of things to happen to have any chance of putting up serious yards through the air. I will keep my optimism tempered until we see it on the field. Hopefully, things wil look up but with all of the hype the past 2 seasons and seeing little to no improvement I won't be too excited until I see us perform on the field Sept 6th. Here's to a better and competitive season!

Based on the spring game, the WR's were catching the passes they were supposed and their routes looked infinitely better than over the past few years. I realize that's not the same as a Saturday in the fall, but it is a legitimate reason to be optimistic the WR position won't be a total failure this year.

Very good to hear. I knew they moved Ianello to another position but wasn't aware we were teaching techniques.

Ianello was fired and during the spring game there were 2 drops max. Can't wait to see this new unit.