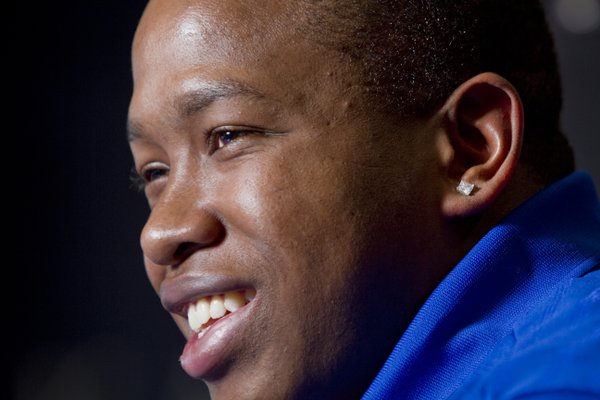 Centers, not unlike third-base coaches in baseball, tend not to get noticed on the football field unless they mess up. They were the centers of attention for KU a year ago, which is not a good thing.

In 2013, Mike Smithburg was used there in the spring, but snapped the ball so poorly in the spring game that the experiment ended there. He had a strong year at guard. Pat Lewandowski was next man up, but didn’t snap the ball particularly well and was overpowered at times and moved to tackle. Snaps weren’t the issue for Dylan Admire. He didn’t have the strength to keep defensive tackles at bay and moved to tight end. Fifth-year senior Gavin Howard stabilized the position. Now the job falls to Haughton, a 6-foot-2, 310-pound recruit from Georgia Military College, where defensive lineman Keon Stowers played before coming to KU.

Best-case scenario: Haughton stays healthy and performs so well he holds down the job for two years while a pair of players recruited out of high school build their bodies and refine their technique before getting their shots. That has been the goal at every position on the offensive line, a position where Charlie Weis didn’t inherit many bodies or much talent and has had to turn to junior college recruits. There is reason to believe that at center, more than any other position on the line, the approach could work.

Haughton, called a “bad muchacho” by Weis, appears to have plenty of strength to play the position. If he can handle the snaps fine and becomes a little better every day in practice, that would enable red-shirt freshman Joe Gibson and true freshman Jacob Bragg to develop behind him. Gibson, recruited to KU out of Rockhurst High in Kansas City, Mo., as a walk-on, earned a scholarship by impressing coaches this past season. Bragg (6-4, 308) earned spots in national all-star games after a standout career at Nacogdoches (Texas) High. When Haughton runs out of eligibility, Bragg will have three remaining years, Gibson two. Of course, should the talent at guard not hold up, it’s possible any of the three players could shift positions, but ideally that won’t happen and KU can develop every position on the line the way center appears to be shaping up.

Stowers helped in the recruitment of Haughton and juco teammate Devon Williams, a 6-5, 335-pound left tackle for Georgia Military, which played in the juco national-title game. Haughton played guard for GMC, but said he prefers center because he enjoys the responsibility of calling out blocking assignments. A former lacrosse player, he didn’t take up football until his freshman season at DuBois High in Baltimore. A mid-year transfer to KU, Haughton had a solid spring and didn’t encounter difficulties snapping the ball.

Whoever ends up the starting center will be ready. Reagan’s track record with transforming players on the Oline speaks for itself.

Or Ryan Cantrell. A two star center who earned All Big 12 honorable mention under Reagan in 2007.

I can’t imagine what he’s gonna do with Jacob Bragg over 4 or 5 years.

Our starting OGs are both sr's, so that might be a greater need next yr.

It is good to finally be building some depth on OL.