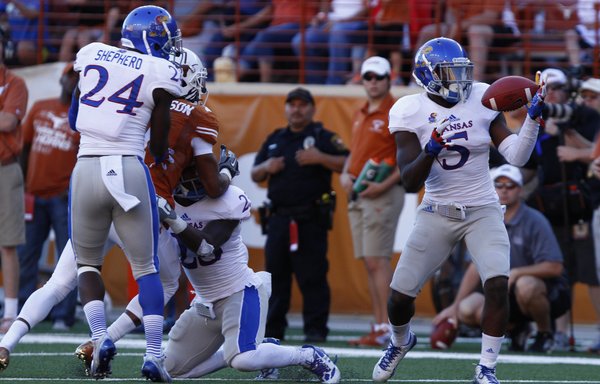 Kansas safety Isaiah Johnson comes away with his second interception of the game on a bobbled pass to a Texas receiver during the fourth quarter on Saturday, Nov. 2, 2013 at Darrell K. Royal Stadium in Austin, Texas. by Nick Krug

Voted Big 12 Defensive Newcomer of the Year as a sophomore last season, Johnson has a knack for intercepting passes. He tied for second in the conference with five picks and ranked second on the Jayhawks with 73 tackles. In his lone season of junior-college football, Johnson had eight interceptions, so his five-pick season was no fluke. He also picked up an interception in the spring game.

Having a defensive back with a knack for interceptions is a bigger plus than ever in today’s game because high-powered offenses score so quickly and on such a high percentage of possessions, particularly in the Big 12.

Originally recruited to college as a wide receiver, Johnson didn’t make the switch because he didn’t have sure hands.

The secondary shapes up as the team’s strongest unit in terms of both depth and talent and Johnson, an instinctive, physical football player,  is one of the keys to it.

5 INT’s is certainly being an impactful player. Normally you’d think that would get him higher on the list. We already have two guys vying for time at nickel on the list, so I’m assuming the depth at DB is why we have them all piled near the bottom.

I feel a run of linemen coming. 17 spots left and 7 or 8 starting linemen remaining. Skill positions will certainly cap the list. Number one has to be Cozart, probably preceded by number 2 Nick Harwell. Bourbon, Pierson, Mundine and Coleman round out the offensive skill positions. Heeney, McDonald, Short and Reynolds round out the defense’s most impactful players.

That leaves the linemen and maybe Pardula. I’m gonna go with Ngalu Fusimalohi or Damon Martin with number 17.

You're absolutely right about the depth at secondary being the reason these guys are lower on the list. They're important. No doubt about it. But because there are several quality players back there their importance becomes smaller than that of guys on the O-Line or at QB, etc.

You're onto something. Hope you enjoy the rest of the list.