Jesse Newell: Welcome back to the GameDay Cram Session, as Kansas is taking on Texas A&M in College Station, Texas, on Saturday.

Matt Tait: Like Texas a few weeks ago, the Aggies like to bring pressure as often as possible. We all know how that worked out for the Kansas offense. 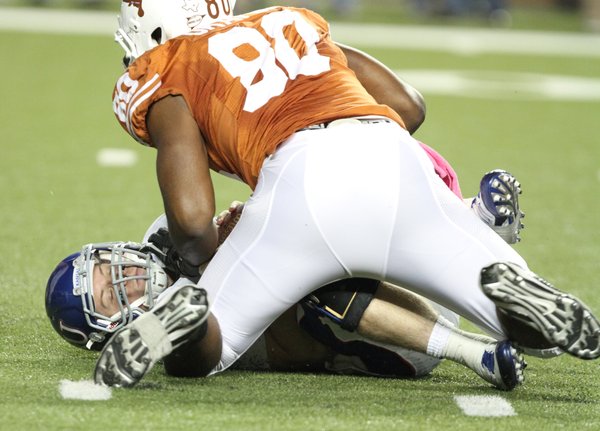 Offensive coordinator Chuck Long said A&M likes to blitz about 50 percent of the time and KU coach Turner Gill said if you can think of a blitz package, the Aggies probably run it. That could make for a long day for KU quarterback Jordan Webb, especially if the Jayhawks can't get the running game going against A&M's stout front seven. Gill expressed some concern over the fact that A&M's base look is a 3-4 set, which is different than what KU has seen during the past couple of weeks.

JN: The Aggies are allowing 308.2 yards per game passing (second-worst nationally), but the Jayhawks have passed for more than 130 yards just once in their last five games. The best bet might be for KU to test A&M's pass defense, and if the Jayhawks are going to do that, Webb will have to play much better than he has the last few weeks. 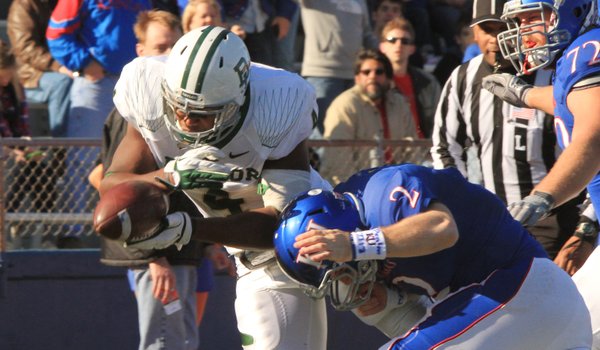 It'll also be a test for KU's offensive line, as A&M is second in the nation with 3.5 sacks per game. To put that in perspective, KU only has three sacks in its last five games combined.

Switching back to KU's offense, Matt, what impresses you about running back Darrian Miller? 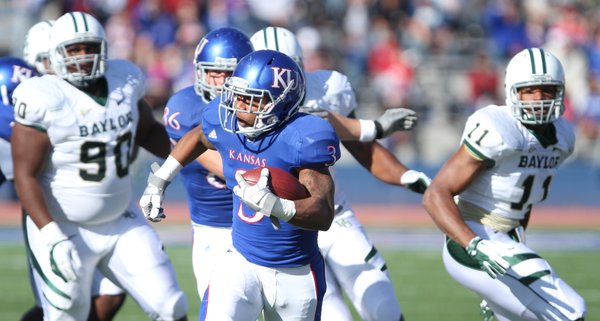 Kansas running back Darrian Miller races up the field for a first down against Baylor during the first quarter on Saturday, Nov. 12, 2011 at Kivisto Field. The run helped put the Jayhawks in field goal range. by Nick Krug

MT: A few things, really. First, his will. The guy is not scared of anything and will run at anybody.

Although KU sophomore James Sims continues to be a key part of the KU running game, Miller clearly is the most important part. During the last two weeks, the freshman from Blue Springs, Mo., has set career bests for carries and yards. Against ISU he had 17 carries for 70 yards. And last week, versus Baylor, he ran 24 times for 147 yards. The KU coaches said they've given Miller more touches in recent weeks because he's produced. I think we'll see some more of that against A&M, so long as the Jayhawks don't fall behind by too much too fast.

JN: KU's offense only seems to have success when its running game is effective, and frankly, teams just haven't run that well this season against the Aggies. In fact, only one A&M opponent in 10 games this year has averaged more than 4 yards per rush.

Overall, the Aggies are second in the conference in rush defense, allowing just 112.2 rushing yards per game.

KU has been stubborn all year running the football, so I'd still expect plenty of Wildcat formations and runs with Miller and Sims. 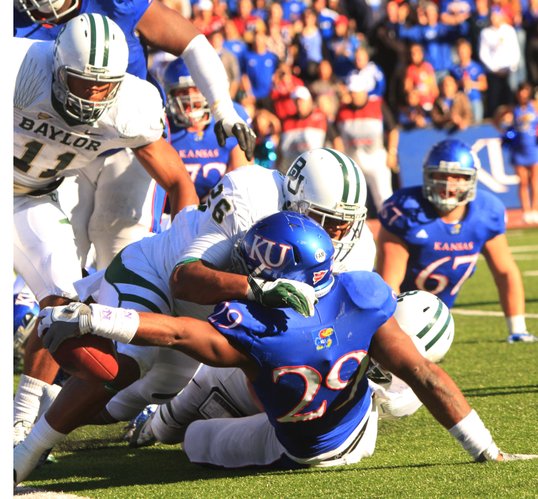 Kansas running back James Sims stretches the ball across the goal line for a touchdown against Baylor on Saturday, Nov. 12, 2011 at Memorial Stadium. by Richard Gwin

KU believes its strength is running the football, so Gill and Long will try to beat A&M with what it does best. 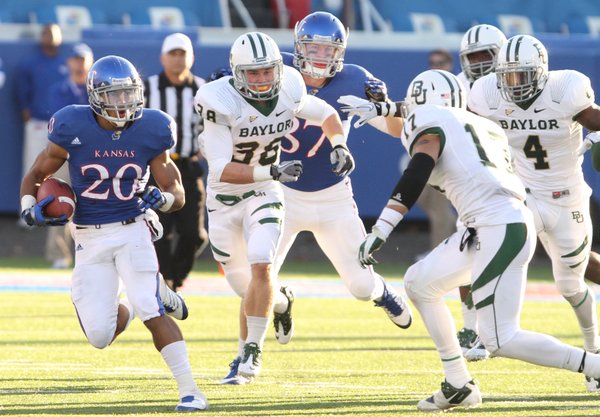 Kansas kick returner D.J. Beshears takes the ball up the field against the Baylor special teams unit late in the fourth quarter on Saturday, Nov. 12, 2011 at Kivisto Field. by Nick Krug

This prediction really isn't as much about the Jayhawks as it is about A&M. The Aggies are desperate — and due — for a feel-good, dominant performance, and I think this is the week they get it. Four of their five losses are by a combined 14 points, including a three-point heart-breaker in quadruple-overtime at K-State last week. With bowl eligibility on the line, this has the feel for that game where A&M's talented offense finally puts it all together.

Really, I'm giving KU's defense a lot of credit here. The Aggies are tied for the fastest-paced team in Div. I (along with Texas Tech), and we've seen how poorly the Jayhawks defense has played this season against the hurry-up (see fourth quarter vs. Baylor). 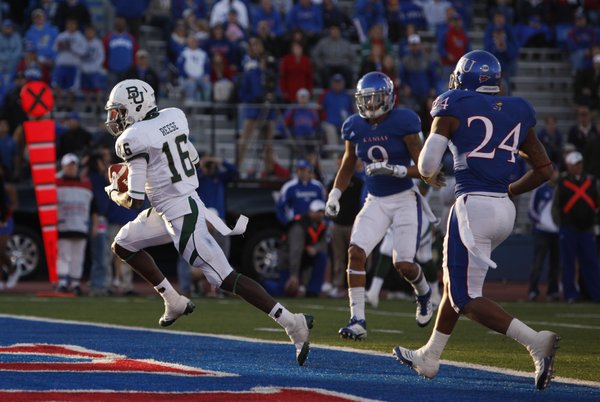 Baylor receiver Tevin Reese slips in for a touchdown past Kansas defenders Keeston Terry (9) and Bradley McDougald (24) during overtime on Saturday, Nov. 12, 2011 at Kivisto Field. by Nick Krug

Texas A&M has gone over 500 yards of offense in six of its 10 games this year, and I think the Aggies will get to that mark on Saturday as well.

Still, I'll say KU's defense continues its recent strong play and forces a couple three-and-outs to go with a couple turnovers. That would keep A&M under 40, but still won't be enough to rescue the Jayhawks' offense in a tough environment. Remember, KU has scored just 10 points in its last two road games. 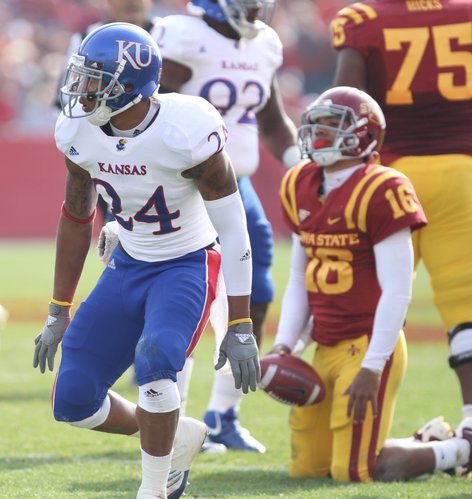 The junior safety is coming off of the three best games of his career and, although I think the KU defense might struggle in this one, I think McDougald's play will continue to impress. He's led or tied for the team lead in tackles during the past three weeks and I think this week's game will make it four. Although the season has been disappointing on a lot of levels for Kansas fans, McDougald's rise has been one of the silver linings and he should continue to shine against A&M. 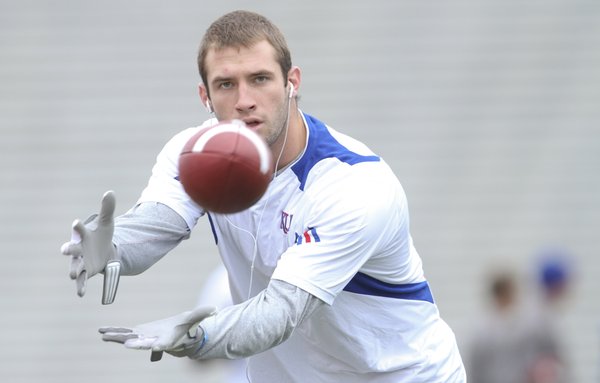 Kansas receiver Kale Pick warms up prior to kickoff against Baylor on Saturday, Nov. 12, 2011 at Kivisto Field. by Nick Krug

After watching two well-placed passes get dropped in the fourth quarter, I won't be surprised if Webb tries to find the sure-handed Pick more often this game.

Pick's season-high is 55 receiving yards, and I think he'll easily surpass that against a soft Texas A&M pass defense.

A complete lack of a defense would create problems for KU.

You know Jesse & Matt had to have a chuckle in typing that one out.

Rhetorical question if there ever was one!

Hell, if 2 opposing defenders showed up there would be a problem for ku !!! LMAOVH !!

tom keegan you would probably create problems for KU.

The front seven of the LJW sports would give KU problems.

Ever since I attended Texas A&M games at KU and Kyle Field I can't stomach to look at the sexually repressed A&M cheer squad and their "jazz hands". Couple that with all of the straight laced military types validates all of the A&M jokes. Bet there is a lot of "school boy fun" going on down there!

Texas A&M showing up will propose problems for KU fball...

Couple of things in play here. 1) Really wish aTm had 6 wins heading into this game to give us a chance (not to win, to cover). 2) UT game is 4 days away from Saturday so the players good be looking ahead. 3) with UT game being so close Saturdays game could be treated as "senior day" meaning if they get up a few touchdowns they scrubs could come marching in early keeping it close. 4) Last year aTm had our teeth on the curb but didn't stomp because Gill and Sherm are boys.

So put your money on the hawks. Haven't felt this good about a cover since I told you to take us when we went to Austin...Yikes!

Gotta be a trick question.

You guys are being way too generous to KU, even (perish the thought) ahperse.

I'm not saying you don't make some logical points, but we've seen enough of these types of games to know what's going to happen.

57-13 (and that's only because they'll call the dogs off after halftime).

You know KU is playing Texas A&M, not Texas, right? Why is everyone from missouri so freaking stupid?

What? Did you get tired of talking about your team's coach getting a DWI so you had to come back on here? Get a life, slaver.

And this week is going to be different how?

This just in: don't run the Spread Offense if you don't have any receivers.

Is the Pope Catholic?

Does a frat boy drink beer?

Do Mizzou fans eat out of walnut bowls?

I love the hawk to rock selection. A guy on the defense that he picks to score.44 points and on a team that the defense is ranked dead last.

I must say there is some clear talent, it just there is no coaching.

Turner must go. How many more times must they be embaressed before actoin is taken. This is rediculous ..... They are getting bent over the "Newell Post " , they are geting a good hot waxing... wha else can you say ??