Why Marcus Morris and Tyshawn Taylor could thrive against Miami (Ohio)

Jesse Newell: Welcome back to the GameDay Cram Session, as Kansas is taking on Miami (Ohio) in Allen Fieldhouse.

Tom, KU is getting ready to play another slow-it-down team in the RedHawks. Which Jayhawks would you say are in most need of a bounceback effort defensively after the UT Arlington game?

Tom Keegan: Josh Selby, Brady Morningstar, Tyrel Reed and Elijah Johnson. Each has to do a better job of keeping his man in front of him. 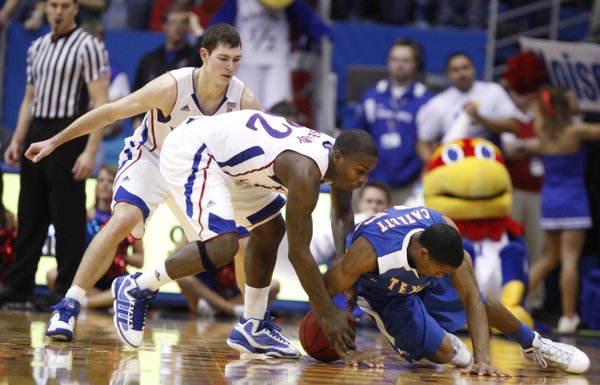 Kansas guard Josh Selby gets tied up with UT Arlington guard Cameron Catlett during the second half, Wednesday, Dec. 29, 2010 at Allen Fieldhouse. In back is Kansas guard Tyrel Reed. by Nick Krug

JN: Probably not a good thing when, at this point in the season, you're saying almost every KU guard needs to step it up defensively. But you're right — UT Arlington's guards were able to get to the lane consistently with the shot clock running down last game. It didn't cost the Jayhawks against the Mavericks, but it could hurt them if they don't get the issue resolved by Big 12 play.

One player who did defend well against UTA, though, was Travis Releford. What impressed you about Releford's performance on Wednesday? 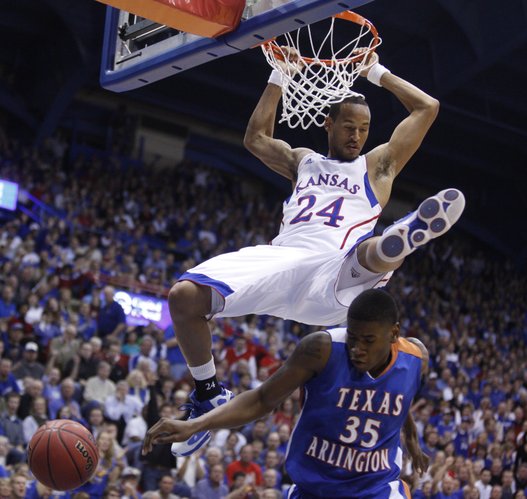 Kansas guard Travis Releford swings his leg over UT Arlington forward Brandon Edwards after a breakaway dunk during the second half, Wednesday, Dec. 29, 2010 at Allen Fieldhouse. by Nick Krug

TK: He's so active. Watch his feet. They're always doing the right thing. Offensively, he's doing a better job of taking what's there for him instead of trying to make something happen when the right call is to run the offense and let the ball movement make something happen. When he checks into the game, he's all-out every second he's on the floor.

JN: This game against Miami (Ohio) should give Releford the opportunity to show he deserves more minutes. Because of the RedHawks' extremely slow pace, KU will need guys in that will defend hard for the whole shot clock, and you'd have to think that out of anyone on his team, KU coach Bill Self might be most happy with Releford's defense right now. 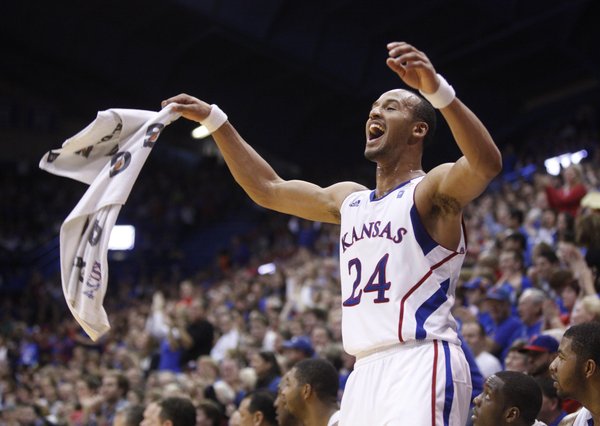 Kansas guard Travis Releford celebrates a dunk by teammate Thomas Robinson against UT Arlington during the second half, Wednesday, Dec. 29, 2010 at Allen Fieldhouse. by Nick Krug 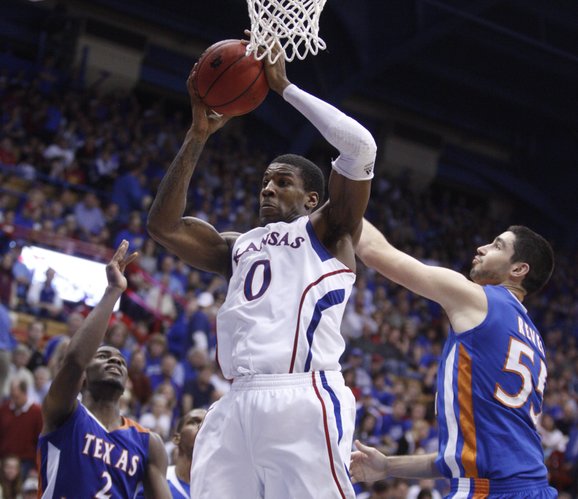 JN: I'll say it's a little more low scoring, and that KU wins by 18. The Jayhawks seem to have hit a mid-season funk and haven't been consistent enough on either end to sustain big leads early in the game. Having said that, KU still will win easily and should dominate the glass against a RedHawks team that has been outrebounded by an average of 9.6 boards over its last three games. 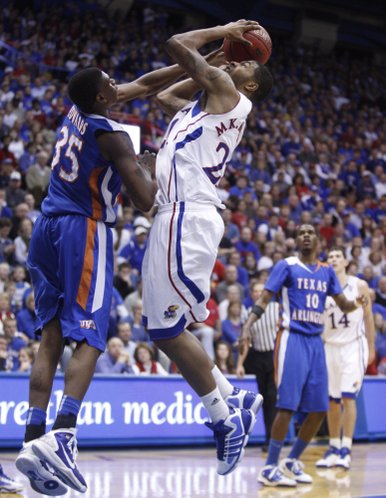 Kansas forward Markieff Morris is fouled on the shot by UT Arlington forward Brandon Edwards during the second half, Wednesday, Dec. 29, 2010 at Allen Fieldhouse. by Nick Krug

He hasn't played All-American caliber basketball in quite a while and he'll be eager to show he's still that level a star after going through a rough stretch.

JN: This looks like a game where Tyshawn Taylor could thrive. 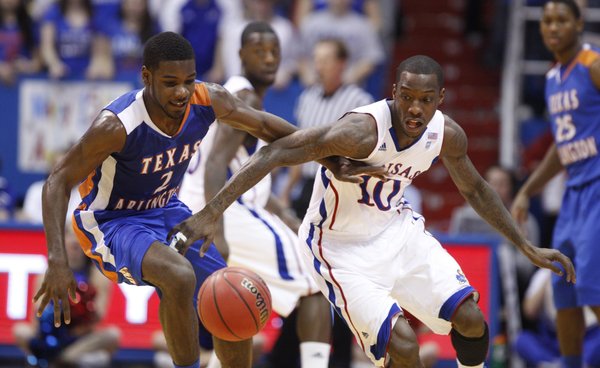 Miami is careless with the basketball offensively and also is in the bottom 10 nationally in forcing turnovers.

If Taylor stays within himself, we could easily see a seven-assist, one-turnover, four-steal kind of game out of him.

Until someone is big enough to knock TRob off the top as King Kong of the Court, he is going to continually be my Hawk to Rock.

This will be an inside game because, Coach likes it that way and we outsize them. I also see Josh having a big game after his 2 point outing.. lets see how it goes

TRob is slowly becoming our most consistent player. I expect him to have a very solid game with, probably, another double-double.

Selby will light it up. Can't see him off two games in a row.

I have a hunch this team will come out fired up. I don't expect it to be much of a game from the tip.

I know HCBS hates to do it but put the press on for any team that wants to slow it down. It speeds up the pace which favors the Jayhawks. Rock Chalk!