After Saturday's college football games, I attempted to think about the big picture in the Big 12.

Since the conference had three teams ranked in the top 10 heading into the weekend, it appeared the Big 12 had a decent chance of landing a team in the BCS Championship in January.

I wouldn't be surprised if it doesn't happen, though.

The Big 12 has had a representative in the BCS Championship in seven of the past 10 years, including the last two seasons.

Last week, Nebraska, Texas and Oklahoma all had BCS title expectations. But each has displayed major flaws in the first four weeks that could slash their dreams of playing in Glendale, Ariz. Texas' dream seems to have already been crushed with its loss to UCLA.

One would think a Big 12 team would have to go undefeated to play for the BCS title. I'm hesitant to say any conference team could do that in 2010.

A closer look why:

Flaw: Inconsistency. It's puzzling how the Huskers could thrash Washington, 56-21 on the road one week, then come back seven days later and only beat lowly South Dakota State, 17-3 at home. With all due respect to South Dakota State...Delaware beat SDSU, 26-3, in its home opener. Come on, Huskers. I expected more. 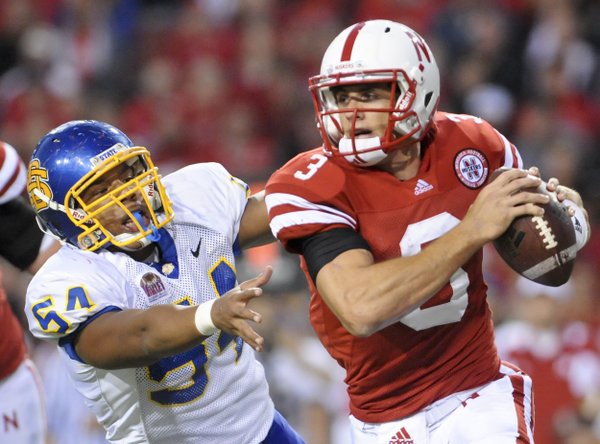 The 6-foot-1, 185-pound Martinez couldn't get into a rhythm Saturday, completing only six of his 14 passes, tossing two interceptions and fumbling his first snap. He was also flagged for a 15-yard taunting penalty.

Nebraska is 4-0 and all seems well, but Martinez must be more consistent if Nebraska has any chance of sniffing the BCS title this season. NU checked in at No. 6 in the new AP poll on Sunday.

Flaw: Playing in too many tight games. OK, so coach Bob Stoops said he thought the Sooners would have better luck after losing four games by a combined 12 points last season.

So far, he's been right.

Of Oklahoma's four victories in 2010, three of them have been one-possession games. But how long will that luck last? It seems it's already lasted quite a while and we haven't reached conference play yet.

Oklahoma has to face Texas next week in Dallas, and has road games later in the season at Missouri, at Texas A&M and at Oklahoma State. The Sooners must play better to remain unbeaten.

Flaw: Lack of production on offense. Or not defending its home field. Or the defensive line being gashed against the run. All of the above. 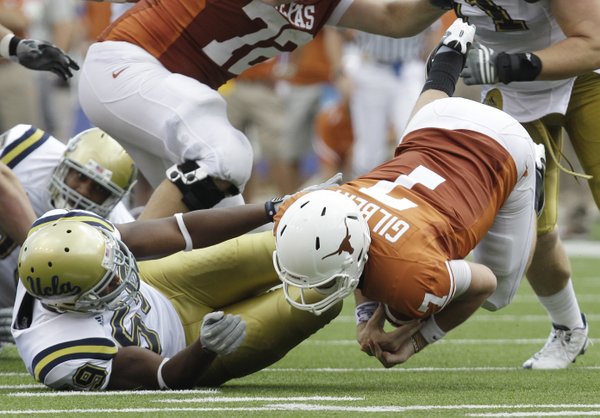 What the heck happened to Texas in its 34-12 loss at home to UCLA?

Safe to say the Longhorns won't be returning to the BCS title for the second straight year. This one was ugly. A defense that was supposed to be stout against the run (No. 1 in country heading into game) surrendered a whopping 264 yards and three touchdowns to a UCLA team that lost at Kansas State in week 1 and was shut out, 35-0, against Stanford.

Texas will take on Oklahoma next week in Dallas, before traveling to Lincoln, Neb. to take on Nebraska with a bye week in between. Not favorable.

The Horns dropped from No. 7 to No. 21 in the rankings this week.

What do you guys think...does a Big 12 team have a chance to play in the biggest game of the college football season this year?

Speaking of Texas, that leads me to reflecting on the fourth week of Big 12 football in the latest episode of Conference ChatterTV. I'll admit, picking Texas to win (and win big) against UCLA was my worst call in the two-year history of ChatterTV. Hey, you win some and lose some:

Onto the week 4 awards for Big 12 players who went above and beyond this past weekend:

Slim pickings in a slow and unimpressive weekend in the Big 12. But Nelson may have saved the Sooners in their 31-29 escape at Cincinnati. The senior displayed a remarkable amount of hustle in chasing Cincinnati receiver D.J. Woods after a 73-yard reception, where Nelson poked the ball free and into the end zone for a touchback and a turnover. Nelson also intercepted a pass in the endzone for another touchback. Red zone defense at its finest.

Furthermore, they can both take it to the house on any given play. McCluster had a monster punt return for a touchdown in the season opener against the Chargers, and had a 31-yard receiving touchdown on Sunday in the Chiefs' victory over the 49ers. 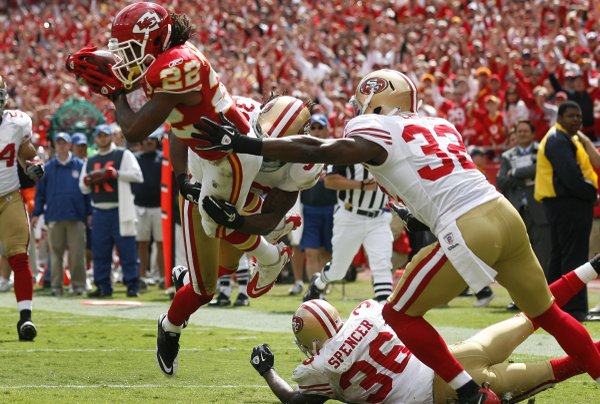 Beshears, similarly, is making an impact on special teams and on offense. He returned a kickoff 96 yards for a touchdown against New Mexico State on Saturday, and took two more handoffs into the endzone.

Seems like both these guys are shifty, change-of-pace energizers who make you watch their every move on the field. Gotta love high-energy guys like this.

Beshears, only a sophomore, has quite the hill to climb if he wants to get to McCluster's level. But he should study his style.

"Ambition!!! Is the most important quality a woman can have!!! That's so so sexy Ladies! Nobody wants a drop out.."

Can't say I disagree there, Von. If you're not following last season's national sacks leader at Texas A&M, he's an interesting dude.

Looking ahead: Upcoming game of the week: Texas vs. Oklahoma (in Dallas).

This one's pretty obvious. Red River's game time was pushed back this season from its usual 11 a.m. slot to 2:30 p.m. Decent news for KU fans since the Jayhawks face Baylor at 11 a.m. next Saturday in Waco, Texas. Early line: Oklahoma by 3.5.

The following is the latest edition of the Sorrentino Scale. The number that follows in parentheses is what the team was ranked last week:

c'mon, even keegs has us higher than colorado.

Beshears has a loooong way to go before we start throwing the McCluster comparison out there. Dexter is one the most explosive players in the nfl

That's pretty much what Sorento said: "...has quite the hill to climb if he wants to get to McCluster's level. But he should study his style."

That's pretty much what Sorento said: "...has quite the hill to climb if he wants to get to McCluster's level. But he should study his style."

No, the worst call was putting Kansas behind Iowa State and Colorado. Texas losing to RIck Neuheisel coached UCLA.

Lets go Jayhawks! lets beat baylor this weekend!:) I really think if we get everything put all together, we have a chance to beat colorado, baylor, iowa state, and possibly kansas state. I really think we have somewhat of a chance to make a bowl game this year! 6-6 is a realistic record that KU could end up with if we work hard in practice, and get the coaching staff and the players all on the same page. Lets all hope Kale Pick gets healthy soon. You never know when we might need him as a back up any given game! Let me know wht you guys think.

First Lil jay..... we're proudly an Adidas School, And your right. 6-6 is a very acheivable goal for us. There is no team on our schedule that we cannot beat, and that's including Nebraska in Lincoln. That being said, It's going to take some work and getting a few of theese "could" win games, along with Should win games.

Your right about Kale, too. I'm not totally sure kale wouldn't have had the same results the last three weks, but that's neither here nor there.

Sims, Beshears, Webb, Patterson and our O-line gotta stay healthy. our D has to solidify a bit, but I love what I'm seeing from our Linebackers.

Eric, I'm surprised you'd find Nebraska's results that puzzling. Perhaps the dropoff was a little more extreme than usual, but it's certainly not uncommon for a team to follow a big win against a good team by playing lousy against a team that it should crush. Throw in the fact that the Huskers are using a freshman QB (as you pointed out), and it shouldn't be that puzzling that they would have a big let-down against South Dakota State.

You could easily swap those rankings, or at least have K-State #4 and Tejas #5. No way Texas is #3 after getting exposed like that.

I'll be watching K-State v Nebraska on Saturday night. I think that game has more interesting implications than the RRR.

Well KG you will be looking at old news on Saturday. I think you need to start watching it on Thursday.

If KG, B_O_B or anyone else starts watching the KSUck v. NU game on Thursday, they will be watching for an entire week before the kickoff.

K-State vs. Nebraska is next Thursday, Oct. 7.

This Thursday's game is Texas A&M at Oklahoma State.