Welcome to the latest edition of Conference Chatter, where today's theme will focus on a little friendly competition.

Hope you don't mind if I put your Big 12 football knowledge to the test.

Naturally, pride will be on the line. But there will also be prizes, courtesy of KUsports.com, so be sure to make your opinions known. Here's how it will work: I'll list 10 over/under questions about Big 12 football for the upcoming season, in addition to a tiebreaker question.

Simply post your answers in the comments section below. Please post answers in the order I ask the questions so it's easier to keep track. Remember to answer the tiebreaker question as well.

Whoever answers the most questions correctly will win a KUsports.com prize package that will include a T-shirt, our KU preseason men's basketball magazine and some other cool stuff.

Please note: Comments are due by 11:59 p.m. Thursday night, Aug. 12. You may only submit your answers once.

That should sum up the rules. Let's get this over/under party started.

Question 1: The rushing touchdowns for Kansas University sophomore running back Toben Opurum this season. Line set at eight. Over or under?

Toben Opurum works for extra yards against Nebraska on Nov. 14, 2009, at Memorial Stadium. by Eric Sorrentino

Background: Opurum rushed for nine touchdowns last year as a freshman. He was hurt the final two games of last season and battled injuries most of the spring. Opurum was not listed on KU's two-deep, post spring depth chart.

KU coach Turner Gill listed sixth-year senior Angus Quigley atop the depth chart at the end of spring ball. Junior Rell Lewis, and freshmen Brandon Bourbon, James Sims and Deshaun Sands could also factor into the mix. But Opurum, if healthy, seems to be a logical option to hear his name called on goal-line situations.

Background: Pick only threw five passes last season. The graduation of Todd Reesing has made the Jayhawks' quarterback battle a two-horse race between Pick and red-shirt freshman Jordan Webb. Pick is known to be the more gifted runner, while Webb is known to have the better arm. Remember, the question asks about Pick's passing touchdowns only, not anything he does on the ground.

Background: The non-conference schedule is tougher than in previous years with Georgia Tech coming to Lawrence and KU having to travel to Hattiesburg, Miss., to take on Southern Miss. The Big 12 slate is considerably more favorable, though, with no Texas, Oklahoma or Texas Tech.

For reference, here's the number of KU wins in the last 10 years:

Background: Thomas led the Big 12 in rushing last year with 1,265 yards in his first year at a Div. I program (he was a junior college transfer from Northwest Mississippi CC and Butler County CC). Can he top his 2009 total? 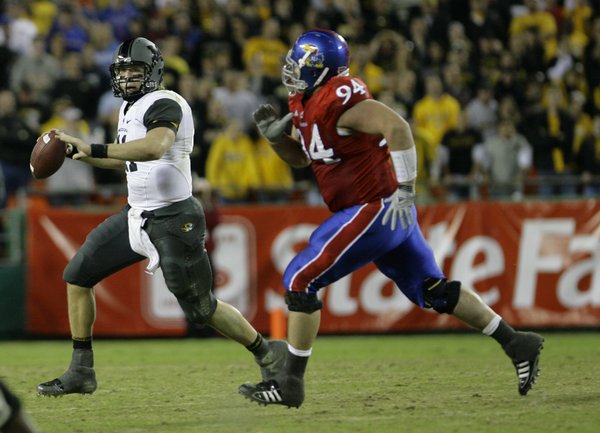 Background: In his first year as a full-time starter for the Tigers in 2009, Gabbert passed for 24 touchdowns, versus nine interceptions. Last season, 14 of Gabbert's 24 TD strikes went to Danario Alexander, who won't be back this year. Juniors Jerrell Jackson and Wes Kemp will be the primary targets. Gabbert lost his best receiver, but he's another year matured. The ankle injury that limited him in the middle of last season is fully healed.

Question 6: Total Nebraska football victories this season, its last as a member of the Big 12. Line set at 10.5. Over/under?

Background: Big expectations are set in Lincoln, Neb., this year, as the Huskers try to improve on their 10-4 season in 2009. Nebraska coach Bo Pelini won nine games in his first year in 2008, so 2010 seems like a logical year for the Huskers to take the next step, perhaps to a BCS bowl game.

The defense lost a mammoth force in Ndamukong Suh, but will attempt to replace him with junior defensive tackle Jared Crick, who had 9.5 sacks a year ago. Crick and Texas A&M's Von Miller were named All-Big 12 preseason defensive co-players of the year.

Background: Broyles was fourth in the Big 12 with 1,120 receiving yards last year — his 15 TD grabs led all conference wideouts — and figures to be the best returning receiver in the conference this season. With sophomore quarterback Landry Jones back, along with speedster running back DeMarco Murray keeping defenses honest, Broyles could be in for a big year.

Question 8: Interceptions by the Texas defense. Line set at 20. Over/under?

Background: The Longhorns led the country with 25 interceptions last season. 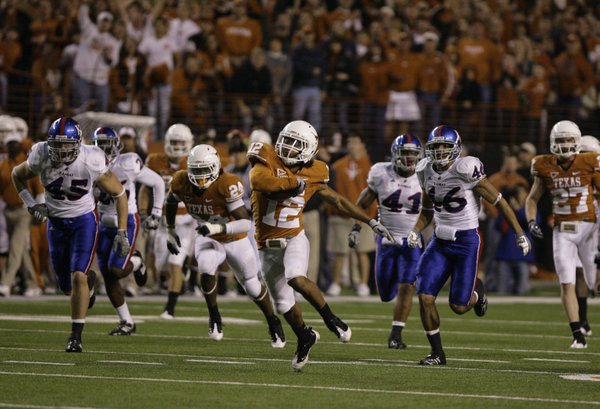 Texas kick returner Earl Thomas races up the field past the Kansas defense for a big return on Nov. 21, 2009, in Austin, Texas. by Eric Sorrentino

UT loses safety Earl Thomas, pictured above, but don't let that fool you. Texas has one of the best secondaries in college football. Three of coordinator Will Muschamp's guys — cornerbacks Aaron Williams and Curtis Brown, and safety Blake Gideon — cracked the All-Big 12 preseason first team.

Question 9: Passing touchdowns by all Texas Tech quarterbacks in 2010. Line set at 35. Over/under?

Background: Seniors Taylor Potts and Steven Sheffield are in a heated quarterback battle. They combined for 36 touchdown passes last season, but the Red Raiders will operate under a new offensive scheme in 2010 with first-year coach Tommy Tuberville. Senior running back Baron Batch is one of the best returning backs in the league. This question comes down to how much you think Tech will keep the ball in the air.

Background: Griffin was hurt and took a medical redshirt last year, but as a freshman in 2008, he combined for 2,937 yards (2,091 passing, 846 rushing). He's expected to be fully healed this season.

Tiebreaker question: How many yards will KU running back Toben Opurum rush for in 2010?

Note: If we have a tie at the end of the 10 questions, the tiebreaker question will be put into effect. The winner will be determined by the answer that is closest to Opurum's rushing yards.

Also note: All bowl games will be counted toward season totals.

Since we won't know a winner until after the bowl games, I'll write a blog every two months keeping track of the contestants whose responses are looking the best. I'll post it here in the Conference Chatter blog, so check back to see if you have a good chance to win.

That should be all, friends. As always, discuss. And make your answers known.

No one has explained their picks yet. Guess I'll have to defend my title from last year.

Eric--thanks for the contest! It will be interesting to hear about the lucky winner. Rock Chalk!

No problem, I'm equally as curious to see who comes out victorious. Thanks for commenting!

Eric- This is a great blog idea, keep the contests coming!

Much appreciated. You guys are tearing it up on here. Thanks again.

Great questions, great lines and great response from the readers. This should be fun to follow...

That should do it, folks.

That will conclude the responses. Thank you to everyone who responded. I'll be back with updates throughout the course of the football season on the contest. Stay tuned!

I know I'm late but I am going to chime in anyway.

Hey guys, here's an update on how Opurum's move to linebacker affects the contest:

Opurum's move to linebacker affects the contest only if the winner must be determined by tiebreaker.

If the the tiebreaker question is required, the winner will (most likely) be the person who guesses the lowest amount of rushing yards. This person will have had the foresight to predict Opurum not factoring into the rushing game as much as his counterparts.

Stuff can still happen, though. What if Quigley gets injured, for instance? I don't know if Sands/Lewis could carry the load themselves.

Didn't see this move coming, and I wish I could have picked a different tiebreaker question. But it's too late to go back and change it now, unfortunately.

What a distinguished honor this is. I will put my kusports.com water bottle on my mantle next to my 3rd place trophy in my fantasy football league from 2007.

I'd like to thank my parents for blessing me with extremely fast typing skills, thus barely beating the deadline by 8 minutes.

I'd also like to thank the now "Big 10" Nebraska Cornhuskers for losing to a far superior 6-6 Washington team. And I can't leave out the Texas defense for just barely squeaking udner the line set at 20 INTs with a whopping 8 INTs for the whole season! Those were the 2 picks I had the least confidence in, but you guys came through for me. I can't thank you enough. Whenever I wear my kusports.com hat and t-shirt I will think of you Jake Locker.

The 2008 Orange Bowl was nice, the 2008 national championship was pretty cool I guess, but this is truly the greatest day ever to be a Jayhawk. ROCK CHALK JAYHAWK! Look forward to defending my title in 2011.....and probably posting a 2-8 record.