How Mitch Lightfoot made charges a secret weapon for KU basketball 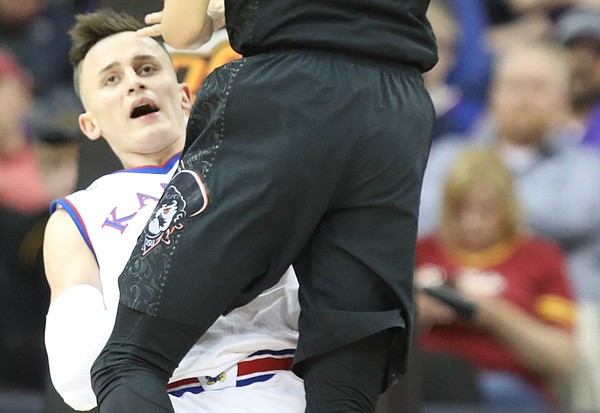 Kansas forward Mitch Lightfoot (44) takes one of his two charges against Oklahoma State during the second half of Thursday's game at Sprint Center in Kansas City, Mo. by Nick Krug

Kansas City, Mo. — Sitting at his locker in the bowels of Sprint Center after an 82-68 KU win, Mitch Lightfoot dropped his phone and watched as it tumbled to the floor.

A reporter reached out to pick it up, but Lightfoot shooed him away.

“It’s already cracked as it is,” Lightfoot said. “It doesn’t really matter.”

As it were, there probably couldn’t have been a more on-brand comment from the sophomore.

Lightfoot scored eight points and grabbed six rebounds on Thursday, but his two biggest plays didn’t involve the ball ever entering his possession. Twice in the second half he stood in to take a charge on the Cowboys. Twice the referee signaled for the offensive foul, leading to an energetic celebration for a player sprawled on his back.

“It’s kind of weird that I get excited for charges,” said Lightfoot. “Someone’s running you over and you get up with a smile on your face.”

Don’t underestimate the value of that smile, though.

As an individual basketball play, few plays are more powerful than a charge.

“If you block it they can get it back,” Lightfoot said. “If you get a charge, it’s automatically our ball and a huge momentum shift.”

“Mitch is a good shot-blocker, but I think taking the charge and getting there is more of a momentum play,” added walk-on Clay Young. “I love charges, personally. I think they’re huge in-game.”

And there’s an art to taking them.

Lightfoot has drawn multiple charges in several games this year, including a December game against Syracuse in Miami and the game on Thursday.

“I certainly look for the opportunity. I try to — not find certain guys — but understand certain people’s games,” LIghtfoot said. “That helps a lot in scout. If he’s going to drive to the hoop and he’s going to play with that reckless abandon, you know you can step in, might get a charge on him”

There’s more to it than that, though.

“I had several fouls (against OSU) so there were certain opportunities where I couldn’t step in for a charge because it’s kind of a 50-50 call,” Lightfoot said. “The ones I stepped in on were kind of like 80-20 where I’m probably going to get that.”

And perhaps what makes Lightfoot most effective is that opponents don’t always see it coming.

Quizzed about Lightfoot’s prowess for drawing charges, Malik Newman offered up one suggestion. He said part of it is Lightfoot avoiding “doing anything dumb,” but the other half is what the opponent might be expecting.

“I think as a guard going to basket, a big man would never try to take a charge on me,” Newman said. “I think that’s the same thing that those guys think with him.”

With Lightfoot, that makes some sense. Listed at 6-foot-8, 210 pounds, Lightfoot is far from the most imposing center in the conference. He’s far from that on his own team.

Silvio De Sousa, who backed up Lightfoot on Thursday, is listed at 6-9, 245. James Sosinski, a mid-season addition from the KU football team, stands at 6-7 but weighs 250 pounds.

“This will sound really weird, but I didn’t really take them,” Lightfoot said. “I took them every once in a while in high school. I got to the All-American camps and stuff and I realized that you might not block everyone’s shot because certain people are more athletic than you. You just gotta step in and take a charge.”

The same might apply to just about every player on the team — with one exception.

Azubuike, who coach Bill Self said will miss the Big 12 tournament with a sprained medial collateral ligament in his left knee, stands at a hefty 7-foot, 280 pounds. For that, at least one teammate couldn’t help but crack a big smile when trying to imagine him sliding over to beat an offensive player to a spot.

Charges are huge momentum swings considering the opponent might be getting ready to throw down a dunk! Keep it up Mitch.

Nice article, Scott. I've noticed all year how good Mitch is at taking charges, so it's great to see someone write about it. And I love Mitch's intelligence and attitude.