Remember Devonte’ Graham’s foul out vs. Villanova? Now, you make the call(s) 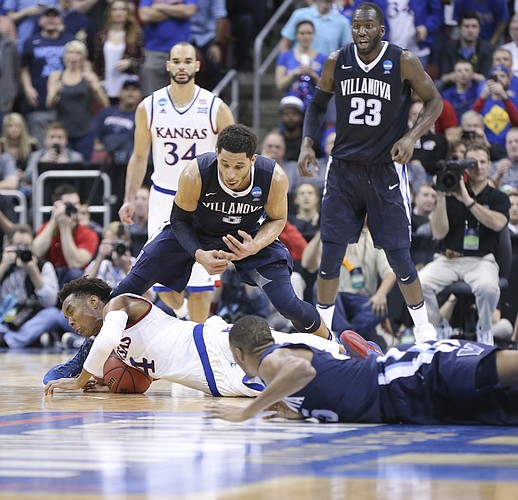 Kansas guard Devonte' Graham dives on a ball after losing it on one of the Jayhawks' final drives against Villanova during the second half, Saturday, March 26, 2016 at KFC Yum! Center in Louisville, Kentucky. Graham was whistled for a foul on the play and the ball was awarded back to the Wildcats. by Nick Krug

San Antonio — You probably remember the foul that knocked Devonte’ Graham out of the 2016 Elite Eight game between Kansas and Villanova.

It’s likely no one agonized over the play more, though, than Graham himself.

“You kind of feel like you let the team down,” Graham said. “For a couple weeks after that, that’s all you can think about.”

The fact of the matter is, the fifth foul might have been the fifth most controversial.

There’s long been a belief among some KU fans that Graham fouled out of that game without committing a single foul. Don’t believe me?

“To be honest I don’t remember all five of ‘em,” Graham said. “Probably about three of them could’ve been questionable.”

Well, now you can decide for yourself.

Why it was a foul: Graham was hounding Phil Booth all the way up the court and put his hands on him a couple times. When Graham finally swiped at the ball around Booth's back, he had to know he was putting himself in jeopardy of a call being made. It’s also possible he nicked Booth’s arm, and referees can have a stricter whistle in the early moments of a game to set some kind of a tone.

Why it wasn’t a foul: Because the play he got called for didn’t look anything like a foul. Graham knocked the ball away cleanly. At the top of the screen, Wayne Selden put both hands on his head in frustration. It's also worth noting the referee who called the foul didn't have a clean look at the play at all.

Why it was a foul: This one is a little tough, since there isn’t a great angle, but you could argue Graham went through the left arm of Ryan Arcidiacono to get the ball. He might have also caught a little bit of his body, although it looks like Arcidiacono is actually the one holding off Graham.

Why it wasn’t a foul: There’s very little contact and it’s basically a loose ball at that point. Graham, again, reacts instantly to the call, and Frank Mason also throws his arms in frustration the second the call is made. Plus, the referee might have had a little extra leeway with Graham knowing he already picked up his first on what was at best a 50-50 call.

Why it was a foul: Again, there’s nothing you can really see from this angle that would be helpful, but it’s possible Graham went through Jalen Brunson’s arm to knock the ball away. Slapping at a ball on a driving player is also dangerous for a player that already has two fouls. Graham put himself in a position where a call could easily be made.

Why it wasn’t a foul: From this angle, at least, the play looks pretty clean. Graham bats the ball off Brunson’s knee and it trickles to Jamari Traylor. Again, Mason reacts in frustration to the call, Graham’s third.

Why it was a foul: Well, first of all, the officials could have called a foul on Landen Lucas, although it looks like Jalen Brunson shoved off the KU big man to accentuate the contact. But with Graham, there’s a bit of contact on the rebound and Darryl Reynolds (45) instantly grabs at his arm as if to say he got hit there. Plus, Graham had his hands on Reynolds' body at the beginning of the rebound.

Why it wasn’t a foul: You’ve seen far worse go uncalled, especially going for a rebound. Plus, it’s rare to see a smaller guard — Graham was listed at 6-2, 175 pounds — get called for a foul on a rebound against a significantly bigger player (6-8, 225 pounds) unless there’s pretty obvious contact.

Why it was a foul: This is the famous — or infamous — fifth foul. And honestly, it’s probably a foul. Graham is going after the loose ball, which is his right, but he slides into Josh Hart and takes out his legs. Hart wasn’t moving other than to bend down and pick up the ball. There’s way too much contact for the whistle not to blow.

Why it wasn’t a foul: Referees typically grant leeway for players going after loose balls. Plus, late in games referees also tend to swallow their whistles — sometimes to the benefit of Kansas (a non-charge call against Iowa State comes to mind).

Graham probably shouldn’t have fouled out against Villanova, not that it matters now.

"It's over now," Graham agreed.

The most egregious call was probably the second foul, while the first and third may have simply come down to the situations Graham put himself in.

As for the fifth foul, since it’s the one everyone remembers the most, Saturday’s media sessions provided the chance for a pair of perspectives on the play.

First, then-freshman Mikal Bridges was the player who knocked the ball out of Graham’s hands to create the loose ball. He was actually credited with a steal in the box score — giving him five when it should have been four — and he still remembered the sequence quite well.

“Graham just split me and Arch,” Bridges recalled. And the ball was loose and I just dove on it. That’s what we do. I guess it rolled to Josh and Josh went to go pick it up and I guess Graham dove on it and got a foul.”

Graham’s thoughts were clear on the play, but a teammate chimed in and provided his own take, saying it’s “part of how we play.”

“I think with that play in particular, I mean that’s just him going hard for the ball. I don’t think anybody can get mad at him for doing that, showing some effort,” said Mitch Lightfoot, who wasn’t yet on KU at the time. “It’s the heat of the game, he dove for a ball, just kind of the call didn’t go his way. We wish it would’ve, but it didn’t. But he’s working his butt off so you can’t get upset with him.”

great article. We got pretty hosed in that game...

Thanks for reminding me why I hate the NCAA tournament. I don't mind KU losing when they play their best against a better team. I hate when the refs have arguably more influence than the players over the outcome of a game. And that's all too often the case in critical games like this.

Yeah, talk about some questionable calls. Unfortunately, Devonte was unlucky on most of those foul calls. And. . . . the fifth foul? I was so upset that he got called for that foul---upset with the call-not upset at Devonte-it took me a long time to get over that. Easy to say that the Jayhawks got hosed in that game. Totally agree with you, Stephen. Water underneath the bridge---hopefully, moving on for a little payback!

We could potentially pay back 'nova and Michigan. Both are deserving.