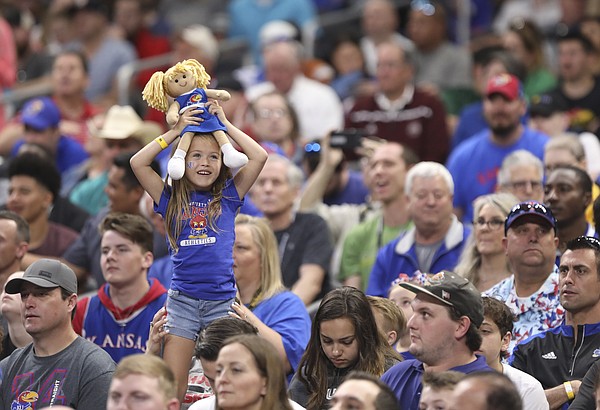 Kansas fan Bristyn Young, San Antonio, hoists up a KU cheerleader doll as she watches the Jayhawks' practice on Friday, March 30, 2018 at the Alamodome in San Antonio, Texas. by Nick Krug

San Antonio — Just about anyone who has ever picked up a basketball imagines what it would be like to hit a game-winning shot or play on the biggest stage.

For KU basketball, those dreams have become a reality. The Jayhawks will take the floor at approximately 7:49 p.m. CT against Villanova with a spot in the championship game on the line.

“It beats the hell out of sitting in class,” joked sophomore forward Mitch Lightfoot.

As the Jayhawks prepare for their semifinal showdown, several shared memories of their first Final Fours and other childhood memories.

First Final Four you watched: “I’d probably say the ’08 team, for real, just the first thing that sticks out to me. How old was I in ’08? I’d be 10. … I remember, they made me go to bed at halftime. That’s what I always tell everyone whenever they ask me. My parents made me go to bed at halftime so I had to wake up in the morning to see (the shot).”

When you became a college basketball fan: “It’s kind of just always been in my blood. Growing up, I was honestly a KU fan, so it’s kind of been in my blood, just part of me, and (I'm) excited to be a part of it now. (To) help us go on this run and help keep it going is pretty special.”

First jersey you owned: “I don’t think I ever had a KU jersey. I think I had a Tony Gonzalez jersey, I know this is football, but I had a Tony Gonzalez Pro Bowl jersey from when he was still with the Chiefs. That was probably my favorite jersey of all time. I still got it. I wear it whenever Chiefs games (are on).”

First Final Four you watched: “I forgot what year (2014), but it was where Shabazz (Napier) and (Ryan) Boatright were playing against Kentucky. UConn dominated the game, basically. I’d seen their guards just picking up the Harrison twins full court, and things like that.”

When you became a college basketball fan: “Probably when I was a sophomore. Yeah I’m a big football guy, though. I’m a big football fan. … When I was little, I was like a big fan: Vince Young at Texas, Reggie Bush at USC. I used to watch a lot of football growing up, being from Texas. That’s a football state.”

First jersey you owned: “Vince Young jersey. I used to wear No. 10 and play quarterback and everything.”

First Final Four you watched: “I don’t know. I think it’s when Duke played Butler in the championship. That’s the first game I really remember. I can’t remember what year it was (2010), but I just remember Butler wasn’t that good of a seed (five-seed) and they were playing Duke and it was kind of cool to watch it.

On Gordon Hayward’s near-halfcourt shot at the end of the game: “I really thought they were going to make it and upset ‘em. But it was just crazy to watch like a powerhouse like Duke go against a team like that and how good of a game it was. It just shows that anything can happen in this game if you get down to it.”

Favorite player when you were little: “I’m from Arizona. I remember my favorite player going up was probably (James) Harden. When ASU got Harden, I liked going and watching him play. ... Steve Nash (was my first) jersey. I was a huge Suns fan. Huge Suns fan. I loved Nash. I went to a bunch of Suns games growing up.”

First Final Four you watched: “First memory was, I hate to say it, but the Chris Webber timeout (1993). But as a kid, I got a great background of grade school coaches and high school coaches. So they always used to talk about the Final Four and what it means to (make) the Final Four. Being one game away, playing for coach Self at Illinois when we lost here to Arizona, that kind of always stuck to me. Like, ‘Man, you can never get that back.’ And then to lose two years in a row to get to this game, and to win it here, it’s a special, special weekend for us.”

First jersey you owned: “I was a big Illinois fan and a big Michigan fan. So I’ve always been a big college basketball fan. … My first jersey was Kendall Gill Fighting Illini orange jersey. And (then there) was a 3-on-3 tournament called Gus Macker. We were called the Fab Four. We could have three players and a sub. I had a Juwan Howard, No. 25 (jersey), because he was part of the Fab Five and his last name was Howard.

On Juwan Howard: He’s got two sons that played in Chicago, maybe five years ago when I was coaching at Illinois. Unbelievable guy. I always tell him I had his jersey first.”

Brian Hanni — Voice of the Jayhawks

First Final Four you watched: “The best story I could give you, the first Final Four I covered was 2003 in New Orleans. I had the pleasure of getting assigned a media seat next to ESPN’s Linda Cohn. Problem was, there was a torrential downpour that day, and getting over from the media hotel to the Superdome, and the media shuttle dropped us off on the opposite entrance from the media entrance.

"By the time I got in, I was soaked like a wet rag. Literally, you could wring the water off my suit. And I go scooting down the line, trying to get in to sit next to my famous ESPN celebrity seat-mate. And she looked up at me like, ‘What kind of rock did this kid crawl out from up from underneath?’ But once I toweled myself off and watched the game, she was a delight to sit next to. And to this day, I still think that Michael Lee shot is going in if Hakim Warrick hadn’t blocked it.”