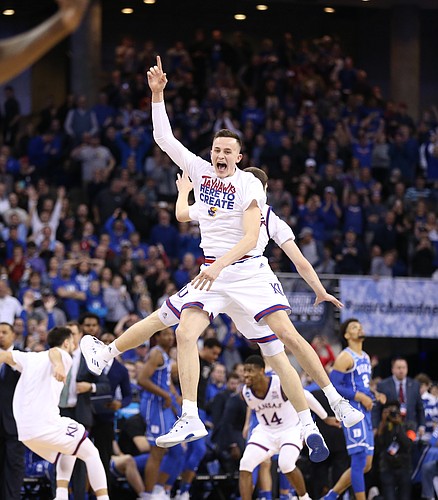 Kansas forward Mitch Lightfoot and Kansas guard Sviatoslav Mykhailiuk (10) celebrate in midair as the seconds after beating Duke in overtime to go to the Final Four on Sunday in Omaha, Neb. by Nick Krug

Still, it'd be hard to argue his handprints weren't all over that game, just in a different vessel.

Lightfoot, KU's first big off the bench for much of the season, knew his role might change when Silvio De Sousa joined the team at semester. He worked to get the freshman up to speed — earning the praise of coach Bill Self at times — even though he knew it might come at his own expense.

"Honestly, that's my entire goal here: KU gets better," Lightfoot said. "It might hurt my playing time, it might hurt my minutes, but it is what it is. KU is going to the Final Four."

Lightfoot, obviously, is not done playing a role for KU basketball.

While he only played two minutes in the second weekend of the tournament — Udoka Azubuike played 44 and De Sousa played 39 — the sophomore tabbed 41 minutes in the first two rounds and had several key performances to help the Jayhawks in Big 12 play.

KU’s roster in the 2017-18 regular season presented a unique opportunity to Lightfoot, allowing him to play more minutes than might have been the case on a team like, well, the one that will take the floor next season.

Should Azubuike return, Lightfoot could end up as the third, fourth or — by the end of the year — even fifth big on a talented KU roster. So far, though, he’s done nothing but keep his head up, both publicly and behind the scenes.

Lightfoot, a lifelong Jayhawk fan, tweeted “I love being a Jayhawk and that’s a fact” back in February. At the same time, he was doing his part to train his replacement — at least for a couple games.

I love being a Jayhawk and that’s a fact

“Just really proud of him,” Lightfoot said of De Sousa

Lightfoot, who has helped De Sousa acclimate to the team off the court, said he was happy to be a “mentor” or sorts for the freshman, teaching him “what it means to be a Jayhawk and how to be a student-athlete.”

The sophomore has also been vocal from the bench, chatting with his understudy during each stop in the action and trying to pass along valuable words of advice.

“It’s great. He’s done a great job of learning,“ Lightfoot said. “My hats off to him for how he’s been progressing. Think it’s only up from here, too."

For what it’s worth, the KU coaches have seen the same.

Earlier in the year, Self noted Lightfoot “wants to win more than he wants to play.” KU big men coach Norm Roberts, on the other hand, was quick to remark that things aren’t just moving in one direction when it comes to that camaraderie.

“There’s been times that Mitch has played really well for us and his biggest cheerleader is Silvio or Udoka," Roberts said. "And the same thing happens, like today, Udoka was the biggest cheerleader for Silvio. He was happy for Silvio and what was going on out there. That’s the way our team is.”

Lucky for the Jayhawks, they'll have all three — big men, cheerleaders, whatever — available as they head toward a showdown with Villanova.

Mitch continues to be one of my favorites. Keep it up Mitch. You are the type of guy that makes this special.

I had wondered why Mitch wasn't playing, and I guarantee that if Kansas had lost this game, every last one of us would be questioning why Mitch wasn't allowed on the floor, especially considering how instrumental he had been in many of our victories this season. But it worked out, we won, and maybe he gets some playing time against the Wildcats on Saturday night.

Not even close. Some people realize that Mitch is a bad match-up against Duke, just as he was against Clemson. Don't know a lot about Villanova, but not really seeing him there either. Maybe against Loyola if we meet them in the finals. Silvio has just become so dominant in reserve. That being said, Cole had a big part in the UNC game when our first 3 (?) bigs got in foul trouble. Glad he is experienced and skilled in reserve.

The crazy thing is some people have predicted that he will transfer for lack of PT. Glad Mitch is a team player that doesn't selfishly quit on his teammates.

Anyone who thinks Mitch will transfer clearly hasn't been paying attention. There is ZERO chance of that happening. In fact, I fully expect that after he graduates he will continue on as a graduate assistant on the bench. He seems like a natural to be coaching when his playing days are over. (So does Devonte', for that matter ...)

I don't think he's going anywhere, but not just because he bleeds crimson and blue. He's been playing out of position all year, but it seems to me he'll maybe be even more valuable when we start playing more true 3's or 4's. Seems like he'll be able to play a number of different spots on the floor, depending on match-ups.

Are you kidding? Both Duke big men outweighed him by about 100 pounds. Why would the coach subject him to that!

He's Senior Day is going to be AWESOME. And it seems to me that one day some team will be lucky enough to call him Coach.