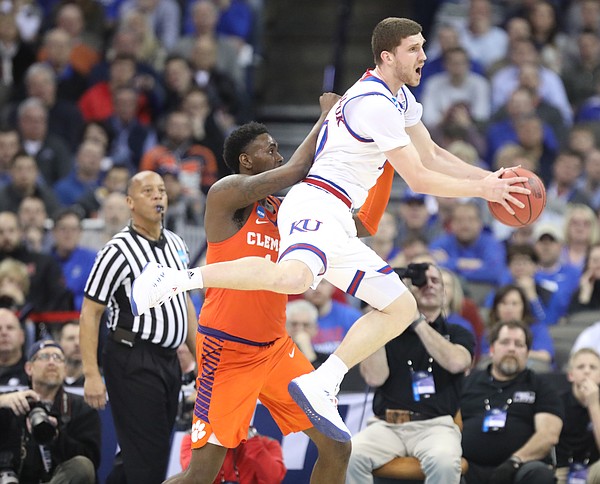 Kansas guard Sviatoslav Mykhailiuk (10) is fouled by Clemson forward Elijah Thomas (14) on the rebound during the first half, Friday, March 23, 2018 at CenturyLink Center in Omaha, Neb. by Nick Krug

Omaha, Neb. — Svi Mykahiliuk noticed a change when he got into the teeth of Big 12 play.

Perhaps the most dramatic example came in KU’s game against TCU. The Horned Frogs’ defense keyed in on Mykhailiuk, switching all along the perimeter and trying to avoid helping off him.

The result? Mykhailiuk, who is averaging 12.3 field goal attempts per game this season, shot only two times. He went 0 for 2 from the field and missed his only 3-point attempt.

“Late in the year, starting I think in the Big 12 conference games, some teams started just running me off the 3-point line,” Mykhailiuk recalled. “Then in the Big 12 tournament, everyone started doing that.”

Mykhailiuk has shot at least 10 times in all but four of KU’s games since that matchup, but there has been a change of the number of open 3-pointers he’s gotten, especially in the NCAA tournament.

Through three rounds of the NCAA tournament, Mykhailiuk has connected on only 5 3s; he met or surpassed that total in nine of KU’s games leading up to that matchup against TCU.

“I haven’t studied it, but how many 3s has he got off in the tournament so far?” asked KU coach Bill Self. “Maybe 15 or so, which is not a great number. I mean that should be a two-game total as opposed to a three-game total.”

Mykhailiuk has only launched 12 3 point attempts in the tournament. That mark of four per game is down from his average of nearly seven in KU’s first 34 contests.

That puts each open 3-point opportunity at a premium, though Mykhailiuk insists it doesn’t add any pressure to his shots.

Duke’s defense will be different than the ones the Jayhawks have seen for most of the season. The Blue Devils have played mostly zone since the midway point in the year.

The zone, inspired by Syracuse coach Jim Boeheim, has mostly resembled a 2-3, though it has taken on other forms depending on the matchup.

In Duke’s Sweet 16 win over Syracuse, the zone resembled more of a 4-1 look at times, with the guards pressed high up on the wings. KU has seen other varieties of zones this year, playing against teams like Syracuse, Washington — who left the middle of the floor open and dared Lagerald Vick to beat them — Baylor and even Nebraska, who confounded the Jayhawks with a 1-3-1 look.

“Duke’s kind of different,” Mykhailiuk said. “Like Syracuse, they’re really long. They be playing zone every year so they know what they’re doing. I think Duke just started playing this year … but for them it’s working really good.”

While it remains to be seen what specific look — or looks — the Blue Devils will give the Jayhawks, Mykhailiuk noted the key to breaking them down may not solely come down to shooting.

Mykhailiuk knows KU will be at a size disadvantage, but the way he sees it, it could actually work in the Jayhawks' favor.