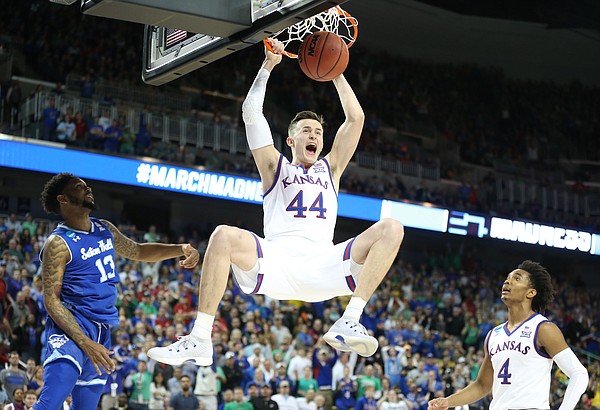 WICHITA — Svi Mykhailiuk is lucky to be alive.

OK, so that might be a slight exaggeration. But if you were only basing it off the look on Bill Self’s face when Mykhailiuk let go of a pass that was at best risky and probably closer to the “terrible” grade Self later applied to it, then the words of the senior after the game made a little more sense.

Here’s how it all happened.

Mykhailiuk ran the baseline and inbounded the ball to Lagerald Vick. Vick tapped it back to Mykhailiuk, who, without even first landing on the ground, threw a pass all the way down the floor to a streaking Devonte’ Graham.

“I saw Devonte’ open so I threw it to him,” said Mykhailiuk. “I did not think (the defender) was going to come steal the ball. I was nervous when I passed that.”

Desi Rodriguez, who was keeping an eye on Lightfoot down the floor, broke away from his man. He had a chance to grab the ball as it bounced right by the half-court line.

The ball should have been picked off. Even the announcer calling the game thought so.

“Back to Mykhailiuk, who threw it away!” exclaimed Brad Nessler, who then saw the ball bounce under Rodriguez’s hands and end up in Graham’s mitts.

(Check out the aftermath of the pass in the photo below. Look at Graham's facial expression and the surprise that's on it after he ended up with the ball. And be sure to note the pain on Rodriguez's face in the background. There's little doubting that the Seton Hall senior, just a split second earlier, thought he had the steal.) 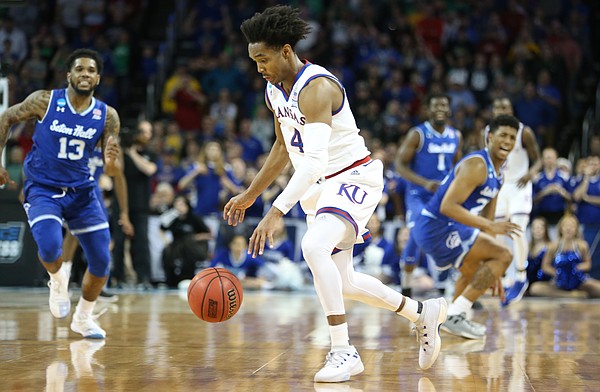 Kansas guard Devonte' Graham (4) comes away with a ball that was nearly stolen late in the second half, Saturday, March 17, 2018 in Wichita, Kan. by Nick Krug

Back to the sequence, the nerves were free-flowing all around.

“Every ball has a chance to get picked off,” said Mitch Lightfoot, “but once the ball was a loose ball I was like, ‘Uh oh.’”

“We just got lucky on that one,” added Graham. “I had seen the defender like at the last second, so I just tried to hit the ball to myself. Thank God that it came, that it went through.”

Graham regained possession, took a pair of dribbles and shoveled the ball off to Lightfoot. The big man dunked it with two hands and let out a roar in the process.

The basket gave KU 77 points and put the Jayhawks up six. Carrington would hit another three, but there wasn’t enough time for the Pirates to keep trading baskets.

It would’ve been the game-winning score, in fact, if not for a meaningless — to some — 3-pointer with two seconds left to massage the final margin.

“You’ve got to make winning plays with the game on the line,” Graham said. “Coach stresses it a lot in practice and we just try to do it in the games.”

As for the other stress — that of Self’s potential reaction — Mykhailiuk’s teammates each laughed when told about Mykhailiuk’s comment.

At least one player, though, agreed with the Ukranian’s assertion.

“Not far from it,” Lightfoot joked. “Thank God it didn’t happen. Thank God we’re moving on.”

wish I could see a replay?

They showed it at least 3 times during the game.

I was on a return trip to NYC from London, arriving a few hours after the game ended,

There was a lot of dollars lost because of that final desperation three! Without it, Kansas covers the spread. After the three, nope. You could hear the groans from all those who bet KU to cover the spread.

That picture right there is priceless.. It was really a close one!!

Watching the game, all of us in my family could not believe that ball got through; it’s one of those plays that if made, could have been a difference maker in the outcome. But you can say that about any number of plays; Vick a wide open layup missed; multiple stick back attempts from SH; it’s sports; whoever makes more plays, wins the contest. And the loser, laments the plays missed.